GM debt-for-shares swap as an illustrative example for Irish banks?
General Motors is offering an interesting insight into senior debt recovery rates in the US. The company has offered to swap some $27bn worth of new equity in exchange for old debt at 225 common shares per $1,000 in debt - effectively implying a recovery rate of 45% (at flat current price per share of $2.03) on its senior debt. Now, factoring in the dilution effect of the new shares, this implies a discount rate of ca 65-70% on the existent debt.

The lesson for NAMA: although Irish banks are not in bankruptcy, like GM, much of the stressed property-linked assets are virtually there already. If NAMA were to buy these at a discount of 15-30% - the numbers rumored out there in the NAMA-proximate worlds of Irish finance, such a discount would imply that the Irish state believes our property development and investment loans to be some 220-430% more secure than the senior debt of one of the largest corporations backed by the US Federal Government cash.

Being realistic was never a strong point of this Government, I guess.


Brian Lenihan on NAMA: per Reuters report on Brian Lenihan's statement to the RTE yesterday, in addition to repeatedly referring to 'pounds' as Irish currency, our Minister for Finance has managed to state that 'if we nationalise BofI and AIB outright, our entire banking system will be 100% nationalised' (I am using an audio recording transcription here, so the quotes are not exact, but preserve the core of his arguments). Hmmm... one would have thought that the Minister who extended banks guarantee to 6 banks (not just AIB and BofI) and who should be aware of the significant presence of non-Irish banks in this economy would be more careful in phrasing his statements.

'I believe it would be very difficult for Ireland to attract funds from abroad, much more challenging, were we to do that.' Now, in effect, as BL points out (hat tip to him), this amounts to an admission that our state is now at or near the limit of its borrowing capacity. Of course, achieving a miserly 110% cover in 9-year bond last week (a bond of very small volume, one must add: see here) suggests just that, but... an admission from the Minister is an all together new dimension to the state borrowing saga.

on the matter. Now, Funny, of course, the Minister should take the same stance as his adviser, Alan AhearneNAMA would require borrowing ca Euro56-60bn to finance a bond-debt swap, with additional Euro4-8bn in post-NAMA recapitalization. A nationalization outright would involve borrowing just Euro2bn to cover existent equity and Euro5bn to shore up some of the capital losses due to transfer of equity and writedowns on the loans books totalling 50% (while driving Capital ratios down to 8% statutory requirement). If we face tight borrowing markets, surely the logic suggest we should try borrowing Euro8bn rather than Euro68bn?

Ah, logic, as well as economics and finance, and fiscal policy and management of public expenditure, are apparently not the strongest skills in DofF - either at the top or at the bottom... So what is then?


Ireland's corporate insolvencies as predicted back in March, here, (actually, I made a more detailed prediction of the rates of insolvencies increases in 2009 in the December 18 issue of Business&Finance magazine pages 42-43, available here, and that forecast itself was building on the defaults model I created when forecasting corporate defaults back in the spring 2008: here scroll to page 10), Irish companies are facing a dramatic rise in insolvencies in 2009 and the rate of bankruptcies is rising. Table below - courtesy of FGS says it all - Q1 2009 number of insolvencies was 170% above that for the same period of 2008. 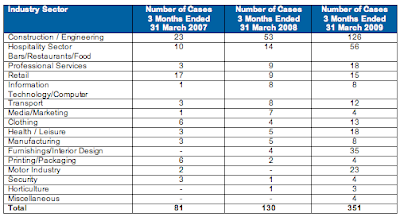 Back in December 2008, my forecast was for the average rise of 247% in 2009 across the main sectors of this economy. We are now well on the way to meet this prediction.

Table below summarises two of my previous forecasts, with the later one still holding nicely, in my view... and yes, for those of you aware of it - the first forecast is, judging by the table color, from an even earlier publication (June 2008). 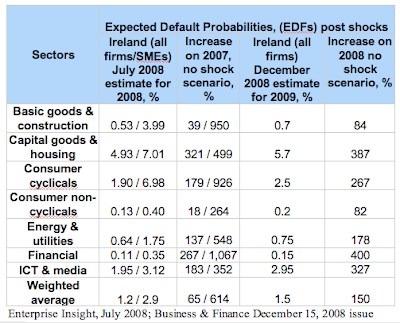 US news front has worsened substantially last week and the stocks snapped their weekly gains accordingly.

Friday’s figures showed demand for durable goods falling 0.8% in March in a seventh monthly decline since July 2008. New orders posted declines in virtually all sectors. Shipments were down 1.7%. On what appeared to some to be a more positive note, inventories fell 1.1% and capital spending by businesses rose 1.5% posting a second consecutive increase, albeit on an abysmally depressing fall-off in January. Both, in my view, are not signs of strength, but of the moderation in the rate of industrial production slowdown. Inventories declines are hardly significant, given rapid and drastic cuts in capacity over the previous months.

The rate of banks closures accelerated. American Southern Bank of Kennesaw, Georgia, was shut down with assets of about $112.3mln and deposits of $104.3mln. Then, Michigan Heritage Bank of Farmington Hills, went bust with total assets of $184.6mln and deposits of $151.7mln. Calabasas, Ca.-based First Bank of Beverly Hills bit the dust with $1.5bn in assets and $1bn in deposits. This time around, no institution stepped up to pick assume the homeless deposits. All within one day – Friday. But before the end of the week, FDIC closed Ketchum, Idaho-based First Bank of Idaho with $374mln in deposits. The grand total of failed US regional banks now stands at 29 since January 1 and 54 since the beginning of this recession. Not many green shoots (other than weeds) out there, amongst the smaller financials.

Now on to more fundamental stuff. I’ve done some numbers crunching and guess what: since 1981, for 27 years S&P500 has outstripped growth rates in the US and global economy in nominal terms. Over the last 27 years annual average growth in nominal GDP in the US stood at 5.8% (2.96% in real terms). Globally, it was 6.2% or 1.37% in real terms. Now, over the same period of time (December 1981-December 2008) S&P 500 moved from 122.55 to 683.38 – a gain of 6.53% pa on average. But this is excluding dividend yield. Thus, should S&P 500 return to some sort of a fundamentals-justified trend, index levels that are justified as sustainable by economic growth standards are in the range between 560-620. In the current range, the implied dividend yield should be around 1.6% pa over the 27-year horizon. In other words, if you think there is something in this economy to drive S&P500 beyond current levels, you better think of a GDP growth rate of 6.2% and a dividend yield of 1.6% in 2009… Otherwise, we are in the over-sold territory.

Then, of course, the US GDP fell 6.3 annualized rate in Q4 2008 and the consensus expectation is for a 5.1% decline in Q1 2009 – adding together to the worst contraction recorded in two consecutive quarters in over 50 years. We shall see this Wednesday when the figures are released.

The data will also give us the trend in inventories and consumer spending contributions to GDP growth. The latter is what many are pinning their hopes on to see the ‘greenish’ shoots of not the recovery yet, but of a stabilization in the rate of decline. Later during the week we will get weekly jobless claims, April consumer confidence and manufacturing sentiment. Of course, the US consumers got some $200bn worth of stimulus in tax refunds and cost-of-living indexation in Q1 2009. (Clearly, not the case in Ireland, where Government advisers, like Alan Ahearne think it’s a bad idea to help consumers by lowering their taxes – see here).

But offsetting the expected consumer spending stabilization will be capital investment. Although there was some increase in capital spending relating to durable goods in March (see above), capital investment is likely to take another hit in Q1 2009 overall, as January and February saw significant cuts in productive capacity by the US firms. Ditto the residential investment: UBS estimated last week that housing investments contracted 38% in Q1.

My bottom line: given that
• inventories did not contribute much to the decline in GDP growth through Q4 2008, and are now likely to show serious deterioration;
• consumer spending is unlikely to post significant upsides despite personal disposable income increases;
• housing and business investment continue to contract; and
• exports are falling precipitously, while most of imports demand contractions have already taken place,
we can expect a 4.9-5.2% fall off in Q1 2009 GDP.

Good luck hunting when the markets open today.
Posted by TrueEconomics at 12:13 AM

I think your comparison of S&P vs GDP growth over the past 17 years might overlook an increased concentration of expected future profits in larger corporations - Walmart vs local shops for example; it would be interesting to find how much of the difference is down to these effects.

A great blog by the way - hopefully one day even the clowns in the Dail will take notice!