IMF's Global Financial Stability Report (available here) is a lengthy read worthy of attention, both for its finance world-view and a diplomatically correct version of the 'Office' comedy. Subtle language turns tell more of a story of IMF's desperation from looking at APIIGS' incompetent macroeconomic management than the direct phrases. That said, there is little in the report, aside from two tests of financial contagion, that is either new or forward-looking.

"The United States, United Kingdom, and Ireland face some of the largest potential costs of financial stabilization given the scale of mortgage defaults."

Emphasis on the word 'mortgage' is mine, of course, added precisely because the IMF concern has not been, to date, echoed by many Irish economists or banks. In fact, all Irish banks currently assume that mortgage defaults will not happen. Instead, policymakers (via NAMA and debt issuance), bankers (via impairment charges and recapitalization funding) and economists (via RTE / Irish Times opinion pages) have been preoccupied with 'toxic' assets (development loans). Poor households have largely been left out of the 'They deserve help too' circle. The Government actually is so confident that mortgage defaults will not be a problem, that it is taxing households into the recession. As I have noted before, this presents a problem - should inflationary pressures rise, interest rates will regain upward momentum and Ireland will be plunged into a mortgages implosion.

How costly are Lenihan's commitments?
Moving on, two illustrations from the IMF report are worth putting together: First, the sheer size of the so-called 'costless' (Brian Lenihan's grasp of economics), guarantees written by Ireland Inc on our banks: 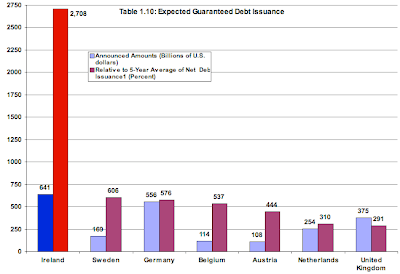 Second, the real-world cost of these guarantees... 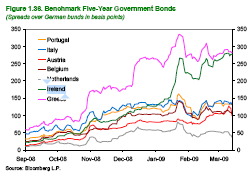 I've identified this link between the throwaway promises Irish Government has been issuing since September and the cost of our debt before. It is nice to see IMF finally saying the same: "Figure 1.37 highlights that the spread on the issues guaranteed by sovereigns perceived as less capable of backing their guarantee is wider than for those that are deemed well able to stand behind their promises, such as the United States and France." 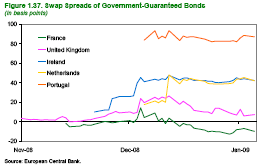 But here is another proof of the link between Brian Lenihan's guarantees and the cost of these to you and me: 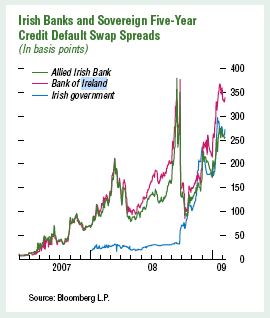 Note the coincident timing: September 2008, and spreads on Government debt shooting through the roof to reach banks bonds spreads and trending from there on side-by-side to Anglo's Nationalization (another spike), then to recapitalization (a slight decline)...

Go long, not short...
The IMF advises the Governments to switch debt issuance to longer term maturities. Exactly the opposite is the strategy adopted by the Irish Government that has launched increasing quantities of new 3-9mo bonds into the markets. "...Authorities should take the opportunity of the currently low level of real long-term yields to lengthen the maturity of issuance where possible to reduce their refinancing risk," says the IMF, implying in simple terms that you shouldn't really pile on short term debt at the time of a prolonged crisis.

For all its faults, even the IMF knows that you can't run the country on the back of credit card debt. But Brian, Brian & Mary wouldn't have a clue, would they? All their experience relates to managing a cash cow for the public sector unions that is our public purse. 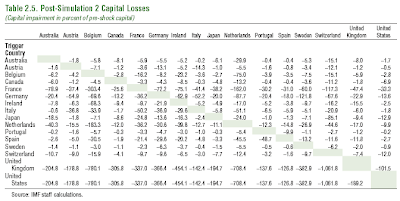 In scenario 2, Australia shows 7 double-digit responses to shocks to other countries' financial systems, Austria, Italy, Portugal, Sweden & UK 6; Canada, Japan, Spain & US 5; France 8; Belgium, Germany & Ireland 9; The Netherlands 12; Switzerland 13. This hardly supports an assertion that we are driven by external markets crises in our own financial sector to any exceptional degree. Yes, we are less exposed than Switzerland and the Netherlands, but we are way more exposed than the many other countries.

The table below (it is the same table that was reported by me in December 2008) shows that we have the second highest (after Luxembourg) ratio of Bonds, Equities and Banks Assets to GDP in the world - a whooping 900%! 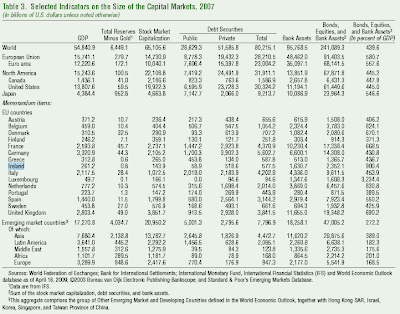 Furthermore, Table 23 provides some amazing evidence: Banks Capital to Assets in Ireland stood at only 4.1% in 2008, down from the high of 5.2% in 2003. Only Belgium and The Netherlands have managed to get lower ratio in 2008. Irish Central Bank actually provided these figures to the IMF and yet the CB has managed to do precious nothing to correct the steadily deteriorating capital ratios throughout 2003-2008 period. This, presumably is why we pay our CB Governor a higher salary than the one awarded to his boss, the ECB Chief.

So the 'comedy' part now being played in Dublin has a simple scenario that IMF, with its diplomatic mission, will not reveal to us, but that is visible to a naked eye though the prism of the IMF report:
And the markets still show willingness to powder this charade with 110% bids cover on Irish Government bonds? For how long?

Posted by TrueEconomics at 2:07 PM

In the US residential mortgages are effectively non recourse loans and as far as I know default on a mortgage is counted the same as default on credit card debt.
Walking away from a house in neg. equity is particularly attractive if you have put no money down and received a 100% or greater loan.
In fact there are websites illustrating how to default and make it work to your advantage.

It takes about 3 months before the first legal notice arrives following a missed payment and another 5 months before an eviction notice is posted .One month later the baliffs arrive.

About a year ago the banks were taking possession of houses trashed by disgruntled owners.
So now the banks policy is to send a rep. to the house one month before eviction with a payment of anything from 300 to 1500 dollars to vacate the house in good order.
Many of these people then rent down the road a bigger house with lower payments than their mortgage.

It is also estimated that the banks are carrrying 600,000 homes on their books that they have repossessed but are not recorded as foreclosures (Perhaps the same is happening already in Ireland?).
They are doing this to prevent a flooding of properties on an already distressed market.This is another reason to distrust the results of the banks stress tests.

In Ireland mortgages are recourse loans and so default is a major problem for a home owner.
With mass unemployment ,lower wages and deflation(raising cost of real debt) I think its inevitable that mass foreclosures are in prospect.
Where then for NAMA?

Can you comment on the above and make a reasoned prediction as to whether sovereign Ireland will default(through a bond failure) and when this is likely to happen.?

Sean, a very good comment, as always. The difference is, indeed, in the ways our legal systems treat mortgage holders. I will answer your question in a separate post over the next couple of days for it deserves some serious considerations.