I have posted a set of presentation slides on Irish Economy on my partner blog: Long Run Economics. Feel free to check them out.

(scroll for Ireland note below)

Junk-bonds default rates: Per Bloomberg (here) ca 53% of US companies that issued high-risk, high-yield bonds will default over the next five years. Jim Reid, head of fundamental credit strategy at Deutsche Bank AG, further argued in his note yesterday that the recovery rate on this paper will be around 0%. This compares with 31% 5-year default rate in the two previous recessions and 45% in the Great Depression. “...40% high-yield defaults over five years seems to be a minimum starting point for this default cycle,” Reid wrote, with 50% rate being “not unrealistic.”

According to Moody’s Investors Service note from March, the 12-month default rate will rise to 22.5% in Europe and 13.8% in the U.S. by the end of the year. Moody’s forecast the 5-year default rate to be about 29% by February 2014, according to the report.

Reid's forecast is driven by continuously falling property markets and he sees another 16% declines due for the US and 30% in further falls in the UK property markets. And this leaves us here in Ireland in a dust. Reid-assumed implicit cumulative property declines over the 5-year horizon are:
This is pretty bad. How bad - consider some mitigating possibilities:
Combined, these 'rosier' scenarios do imply a possibility of the US reaching the average ca 30-33% default rate on junk bonds this time around. We might be not as bad off as in the Great Depression after all... and we are certainly not as bad off as the equity markets in some jurisdictions (e.g Ireland) where shareholder wealth destruction has been much deeper than 30%, or indeed, 53%. So assumptions are the key and comparatives are the lock-in!

But what Reid's analysis shows is the dire need for stronger credit risk assessment of the fixed income portfolios traded, including in the ETFs universe. Seniority is the king, plus Government underwriting.

Junk estimates default rates: there are new 'estimates' of the Exchequer receipts being floated around today by Brian Lenihan (here): €33bn in tax revenue for 2009. This is about as realistic of an assessment as a snail's own worldview stuck atop a bullet train. The state will be lucky to pluck €30-31bn out of this economy comes December, simply because whatever the boffins of DofF are forecasting today for increased revenue from the mini-Budget tax hikes - all will be undone tomorrow by business and income tax receipts from sole traders and SMEs.

“Two-thirds of our spending is now welfare payments and payments to public servants. If you want an adjustment on the spending side you have to cut pay for public servants or cut rates for social welfare,” he told RTÉ News. “I have not seen many people advising me to do that. Let’s get real where the balance has to be struck here. Anyone who suggests that this cannot be done without tax is deceiving themselves.” Well, Minister, this is what happens when you surround yourself with lackeys for advisers. If 2/3rds of your household bill goes to pay servants and your non-working extended family, you are in an MCHammer-land: fat trousers and bankrupt estate.

My advice to our Minister-in-Charge-of-Bankrupting-Ireland is to get his head of the sand: cut 20% of the public pay bill by laying off some, trimming wages of others and scaling back pensions to those retired will be a good start. Follow it up with welfare spending cuts and stronger enforcement of welfare standards: unemployment benefits down by 5%, social welfare rates down by 15%.

Otherwise, Mr Lenihan's default rates on Budget forecasts will exceed those of the US junk bonds... Then again, it is hard to tell right now which paper is of higher quality.
Capital flows and Irish Capital Acquisitions Data:
Per mu post yesterday, here are two charts (from Follow the Money) 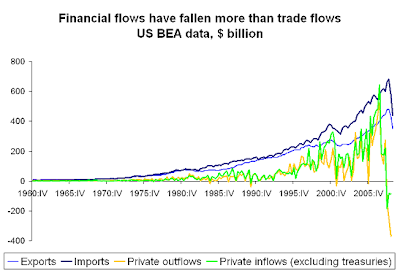 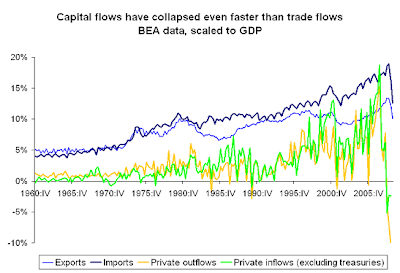 showing US financial and trade flows dynamics and an even faster fall off in the capital formation. Clearly, our yesterday's CSO data is somewhat different, which suggests to me that Irish stats on relatively slow-declining capital acquisition in the industrial sectors are linked to some accounting trickery more than to real acquisitions. If the rest of the world is falling through the basement, how can Ireland still be hanging around in its first floor bedroom? 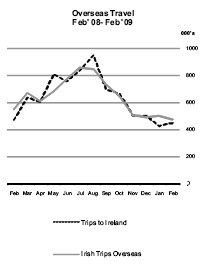 Posted by TrueEconomics at 9:03 AM

By the way I thought your response to another contributor on property tax issue was thorough and potentially workable if implemented by you.

What I mean is that if I had the confidence that it would be managed in exactly this way by competent professionals I may be persuaded. Sadly we have to get real about this. I can guarantee you that the FF property tax will be implemented by the usual gang of inefficient dull witted incompetents and the system will be designed to go for the simple cleanest option i.e. €1 per sq foot or three bands depending on where you live (and if you dont work you dont pay which makes it another tax on work). In other words in will take no account of whether you have a big mortgage, pay mgt fees etc. That's my view anyway.

And I agree with [Fintan?] that like in the 80s and 90s this will be political dynamite and many will be slow to pay (even some who could afford to).

Another option less emotional is to consider other household related charges for say water, estate and other infrastructure maintenance AT least it will you will think you are getting something back and you are not paying stamp duty twice. What about a tax on rent to ensure people dont opt to rent instead of homeownership.

Whatever happens the government need to spell it out soon otherwise the property sector will remain in the doldrums (potential buyers will continue to sit on the fence and await the outcome etc.) and now that we own the banks we all have a shared interest in the health of the property sector.