Despite the rise in 3Q 2015, current level of Personal Expenditure on Goods & Services remains 7.85% below pre-crisis peak levels. 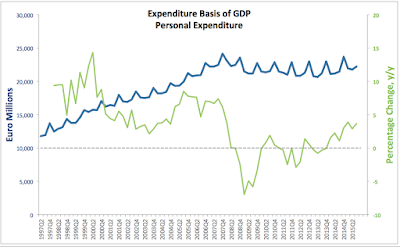 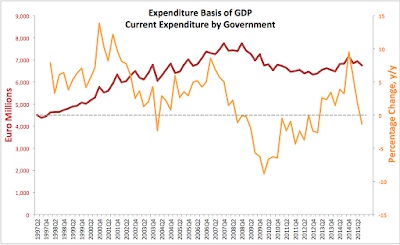 Gross Domestic Fixed Capital Formation continued to post literally unbelievable readings in 3Q 2015, rising 35.8% y/y, compared to 34.2% increase recorded in 2Q 2015 and to 10.1% rise in 3Q 2014. 3Q 2015 y/y growth figure was the highest on record and there is a clear pattern of dramatic increases over 4Q 2014, 2Q 2015 and 3Q 2015, with last four quarters average growth rate at 24.9% implying that Irish economy’s capital stock should be doubling in size every 3 years. This is plain bonkers and is a clear signifier of distortions induced into the Irish economy by the likes of Nama, vulture funds and MNCs.

Based on our official accounts, whilst building and construction (including civil engineering etc) added only EUR44 million to GDP in 3Q 2015, Fixed Capital Formation jumped by EUR3.1 billion over the same period of time. 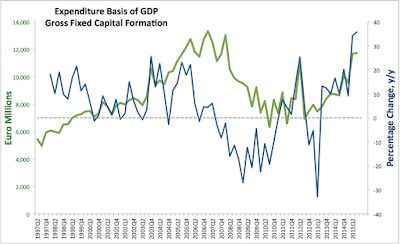 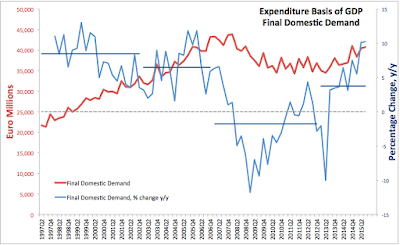 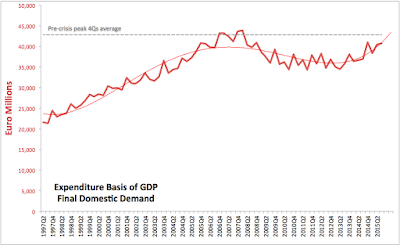 One additional point is worth making with respect to the expenditure side of Irish National Accounts in 3Q 2015. In last quarter, EUR497 million (or 37.6% of total GNP growth y/y) came from the expansion in the Value of Physical Changes in Stocks. This is not insignificant. In 3Q 2015, compared to 3Q 2014, Personal Expenditure in Ireland contributed EUR779 million, while Changes in the Value of Stocks contributed EUR497 million. Absent this level of growth in stocks, Irish GNP would have been up only 3.43% y/y instead of 5.5% and taking into the account last four quarters average changes in Stocks, the GNP would have been up just 2.8%. In other words, quite a bit of Irish GDP and GNP growth in 3Q 2015 was down to companies accumulating Physical Stocks of goods and services, sitting unsold.

A key observation, therefore, from the entire National Accounts series is that one cannot talk about Irish economy ‘overheating’ or ‘running at its potential output’ anymore: all three headline growth figures of GDP growth (+6.84% y/y in 3Q 2015), GNP growth (+5.50% y/y) and Domestic Demand growth (+10.23% y/y) are influenced significantly by MNCs and post-crisis financial and property markets re-pricing. In the surreal world of Irish economics, the thermometer that could have told us about economy’s health is simply badly broken.


Stay tuned for analysis of Irish External Trade figures next.

Posted by TrueEconomics at 8:56 AM