In two previous posts, I have covered November BRIC PMI (released by Markit):


Summary table of both here: 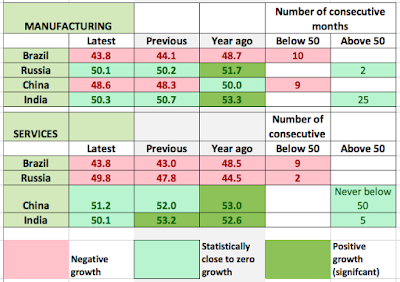 
Russian Composite PMI came in at 50.5 in November, which marks an improvement on 49.0 reading in October. Per Markit: “…the composite index for Russia returned to expansionary territory in November. At 50.5, up from 49.0, the latest reading was led by the manufacturing sector, which registered its strongest rate of growth in one year.” Composite employment activity contracted. Overall, the pattern since May 2015 has been for a one month of above 50 reading followed by a month of sub-50 reading. Thus, 3mo average through November is now at 50.2, while 3mo average through August is at 49.8. Both compare favourably to the 3mo average through November 2014 which stands at 49.2, but both 3mo averages are weak. In simple terms, Russian economy is bouncing along the bottom of the sub-cycle with no catalyst to the upside.

China Composite PMI came in at 50.5 in November, breaking three consecutive months of sub-50 readings, but posting, nonetheless an extremely weak expansionary reading. 3mo average is at 49.5 through November 2015, down on 50.5 3mo average through August 2015 and down on 51.7 3mo average reading through November 2014. All signs are of a major slowdown in the Chinese growth counting in November. Per Markit: “business activity in China increased for the first time in four months in November. That said, the rate of expansion was only marginal… The renewed increase in overall Chinese business activity was supported by a further rise in service sector activity in November. That said, the pace of expansion eased since October and was only modest. …Meanwhile, manufacturing production stabilised in November, following a six-month sequence of reduction. After a solid expansion in October, total new work placed at Chinese service providers rose only slightly in November. According to panellists, relatively weak market conditions had softened client demand in the latest survey period. Furthermore, September 2015 excepted, the latest increase in new work was the slowest seen in 16 months. In contrast, manufacturing firms saw a further decline in new business during November. Though modest, the decrease in new order volumes at manufacturers offset the increase at service providers, and led to a slight fall in composite new business.”

Indian Composite PMI fell sharply from 52.6 in October to 50.2 in November. On a 3mo average basis, reading through November 2015 is at 51.5 which is marginally better than 5.4 reading in 3mo through August 2015 and down on 51.7 reading in 3mo period through November 2014. Per Markit: “Posting a five-month low of 50.2 in November (October: 52.6), the seasonally adjusted Nikkei India Composite PMI Output Index was indicative of little-change in the level of private sector activity in India. Growth of manufacturing production softened to the slowest in the current 25-month sequence of expansion, while services activity broadly stagnated. …Indian services companies saw demand growth lose strength during November, leading to the slowest rise in incoming new work since July. …Order book volumes in the manufacturing economy increased for the twenty fifth straight month, although at the weakest pace in this sequence.”

Brazil’s Composite PMI remained deep into contraction territory at 44.5 in November, which is an improvement on an abysmal 42.7 reading in September and October 2015. On a 3 mo average basis, reading through November 2015 stands at 43.3, which is below the already weak 43.7 reading for the 3mo period through August 2015 and well below the 49.2 reading through November 2014. November 2015 marks 9th consecutive month of sub-50 readings in the series for Brazil making the Latin American economy the worst performer in the group of BRIC economies for the ninth month running. Per Markit: “Output, new orders and employment shrunk across the manufacturing and service sectors”, with downturn being more pronounced in manufacturing. Overall “weaker contraction in private sector activity” came on foot of “a softer reduction in services output, as manufacturing production dropped at the second fastest pace in 80 months.”

Charts to summarise the trends (note: charts use my own Composite BRIC index based on 100=zero growth line): 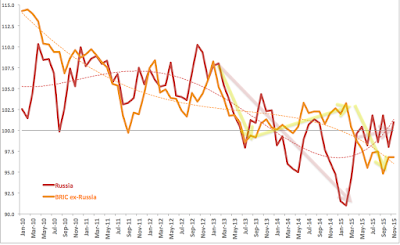 The above chart clearly shows that Russia is currently acting as a positive driver for BRIC Composite PMI dynamics. The core downside driver is Brazil. 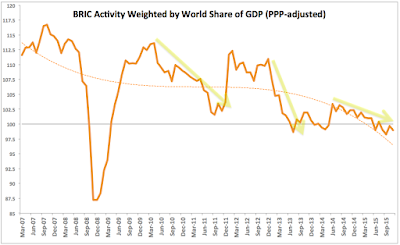 Summary: per chart above, BRIC economies continued to exert negative pressure on global growth rates in November for the fourth consecutive month running. More importantly, BRIC economies posted growth conditions consistent with slower (than global ) growth since July 2014.  This scenario - of negative impact of BRIC growth on global growth conditions - is likely to remain in place in months to come as all BRIC economies continue to face downside risks to their growth rates.

Posted by TrueEconomics at 3:53 PM