In a post yesterday, I mentioned USD3 trillion hole in global bonds markets looming on the horizon as the U.S. Fed embarks on its cautious tightening cycle. Now, couple more victims of that fabled 'normalization' that few in the markets expected.

As noted, US 2-year yields are now at 1.09%, their highest level since April 2010 and roughly double January 2015 average. Now, estimated interest on U.S. federal debt in 2015 stood at around USD251 billion for publicly held debt of USD13,124 billion. Now, suppose we slap on another 0.55%-odd on that. That pushes interest payments on publicly held portion of U.S. debt pile to over USD323 billion. Not exactly chop change...

And another casualty of 'normalization' - global profit margins per BCA Research:
"Over the past two decades, the G7 yield curve has been an excellent leading indicator of global margins. Currently, not only are short-term borrowing costs becoming prohibitive, at the margin, but the incentive to raise debt and retire equity to boost EPS is diminishing. This suggests that profit margins have likely peaked for the cycle."

Here's a chart showing both: 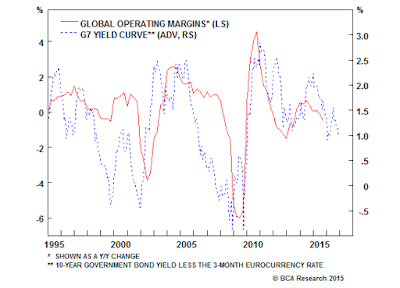 Now, take BCA conclusion: "Finally, global junk bonds are pointing to a drop in equities in the coming months, if the historical correlation holds. Indeed, we are heeding the bond market’s message, and are concerned about margin trouble and the potential for an EM non-financial corporate sector accident: remain defensively positioned."

In other words, given the leverage take on since the crisis, and given the prospects for organic growth, as well as the simple fact that advanced economies' corporates have been reliant for a good part of decade and a half on emerging markets to find growth opportunities, all this rates 'normalizing' ain't hitting the EMs alone but is bound to under the skin of the U.S. and European corporates too.

Posted by TrueEconomics at 7:37 AM