As reported by BOFIT, Russia’s 4th largest and state-owned Vnesheconombank  (VEB Group which technically is not a bank, but a development bank and an owner of a number of banks, so as such VEB is not subject to CBR supervision) requires estimated funding supports at EUR15–20 billion “to cover at least the next few years”.  Per Bloomberg, VEB has been seeking USD23 billion “to support long-term growth and pay off the upcoming loan” (data as of November 23). VEB total assets in Russia amount to ca EUR45 billion, which, per BOFIT, “would make VEB Russia’s fourth largest bank with holdings that correspond to about 4 % of the banking sector’s total assets”. Overall, VEB holds 2.8 trillion Rubles in loans assets and around 1 trillion Rubles in other assets.

To-date, VEB received EUR8 billion in deposits from the National Welfare Fund and about EUR500 million in other monies (most of which came from the Central Bank’s 2014 profits).

Per both, Bloomberg and BOFIT: VEB has been a major lender behind Sochi Winter Olympics 2014. New lending increased total loans held by the bank by some 25% in Ruble terms in 2013 before doubling loans in 2014. VEB started aggressive loans expansion in 2007 since when its assets base grew almost 10-fold. Over 2015, bank-held loans posted some serious deterioration in quality forcing bank to set aside significant reserves to cover potential losses. Per Reuters report, “S&P estimates some 500 billion roubles of VEB's loans were directed by the government and are therefore regarded as relatively risky. While the huge investments made in Sochi have generated public discussion in Russia, far less attention has been given to no less massive investments VEB made in Ukraine. "That's still on their books and they keep rolling those loans over. Of course it's only a question of time before they accept losses on those assets," said S&P's Vartapetov. In an interview in December 2013, VEB Chairman Vladimir Dmitriev said the bank had via Russian investors ploughed $8 billion into Ukrainian steel plants, mainly in the Donbass region, since ravaged in a separatist conflict. He said the investment had supported 40,000 Ukrainian workers, but did not say how the Russian economy had benefited.” Overall, Russian banks’ continued presence and even growth in Ukraine - while puzzling to some external observers - can be explained by the significant role these banks play in the Ukrainian economy.

In 2014, VEB posted full year loss of USD4.5 billion / RUB250 billion and in 1H 2015 losses totalled USD1.5 billion. VEB’s Ukrainian subsidiary was one of the big drivers for these. Based on the figures, VEB posted the largest loss of any Russian company in 2014.  The top three largest loss making companies in 2014 were: Vnesheconombank, followed by the steelmaking giant Mechel (loss of 167 billion rubles) and the monopoly Russian Railways (losses of 99 billion rubles).

In addition, VEB holds some USD19.3 billion of debt maturing through 2025 (see chart from Bloomberg) with EUR9 billion of this in eurobonds: 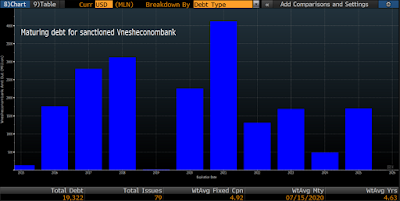 VEB is subject to both EU and US sanctions which effectively shut VEB access to funding markets and the bank will require between EUR2.5 and 3 billion for debt servicing in 2016 alone. This week, VEB secured a five-year loan of 10 billion yuan or EUR1.4 billion from China Development Bank.

Recently, Finance Minister Anton Siluanov stated that VEB requires as much as USD20 billion in funding (ca 1.7% of Russian GDP), and that VEB is expected to sell some of its assets to fund part of the gap.


Per Bloomberg, “the finance ministry’s proposals include exchanging the lender’s Eurobonds for Russian government securities, Vedomosti reported Nov. 24. Other options on the table include a local government bond offering for 1.5 trillion rubles to recapitalize the bank, and transferring bad assets from VEB’s balance sheet to the state, according to newspaper Kommersant.”