Anyone watching financial markets and economics in 2015 would know that this year was marked by a huge rise in volatility. Not the continuous volatility along the established trend, but a 'surprise' volatility concentrated on the tails of distributions of returns and growth numbers. In other words, the worst kind of volatility - the loss and regret aversion type. 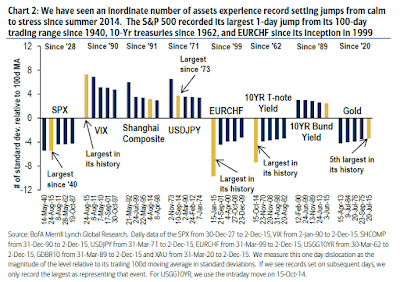 In the 'repaired' world of predictable monetary policy with well-signalled forward guidance, 2015 should have been much calmer, as policy surprises were nowhere to be seen (Bank of Japan continued unabated flooding of money, while ECB embarked on its well-in-advance-flagged QE and the Fed 'cautious rates normalisation' switched was anticipated for months, amidst BOE staying put, as predicted by everyone every time London committee met). Alas, that was not the case and 2015 ended up being a year of more extreme shifts into stress than any other year on record.

Likewise, the U.S. economic growth - the most watched and most forecasted series in the global economy - produced more surprises for forecasters: 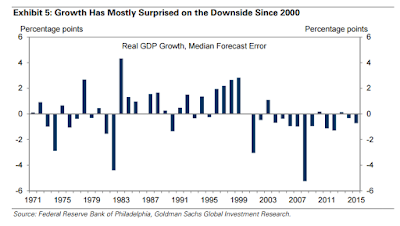 Per above, 2015 has been a second consecutive year with U.S. GDP growth surprising forecasters to the downside. Worse, yet, since 2001, U.S. GDP growth produced downside surprises compared to consensus forecasts in 12 out of 15 years.

In the past cycles, the early 1990s recession produced an exit from the downside cycle that resulted in 2 consecutive years of upside surprises in growth; for the exit from the 1980s recession, there were five consecutive periods of upside growth relative to the forecasts. Even in the horrific 1970s, the average forecast over-optimism relative to outrun was closer to zero, against the current post-recessionary period average surprise to the forecast being around -0.5 percentage points.

In other words, if you need a confirmation that four years after the 'recovery' onset, the world of finance and growth remains effectively 'trendless', have another look at the charts above...

Posted by TrueEconomics at 1:12 PM