While things were bustlingly rosy for GDP and GNP based on year-on-year growth figures, the picture is much more mixed when it comes to quarterly growth rates. 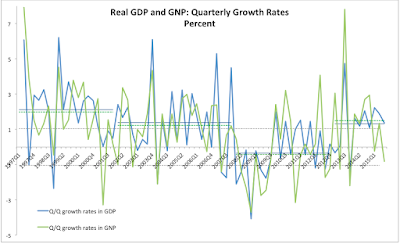 The key takeaways here are:


In other words, MNCs extraction of profits from the economy is ramping out, which is helping the Exchequer and pushes up GDP, but also is leading to GNP growth lagging that of GDP.

Posted by TrueEconomics at 9:29 PM