Irish debt figures, despite all the 'positivity' chatter from the Merrion Street of late, have been making rounds across the analysts' notes (see, for example, McKinsey global debt research published recently) and the Troika assessments. Years of 'deleveraging' and 'permanent restructurings' or arrears, rounds of sovereign debt re-engineerings and 'burden reductions'... all in, the latest assessment of the Irish economy by the EU is telling the tale (see full document here: http://ec.europa.eu/europe2020/pdf/csr2015/cr2015_ireland_en.pdf): Here's the EU assessment: "Private sector debt started to decline but is still considerably higher than the euro area average. Private sector non-consolidated debt amounted to EUR515.3 billion (283.5% of GDP) in the Q3 2014, down 10.6% from a peak of EUR576.6 billion in mid-2012. The correction begun since 2013 follows the excessive build-up between 2002 and 2011, when private indebtedness rose from about 120 % of GDP to over 320% of GDP [chart above]. Most of this increase can be attributed to the corporate sector amid expanding activity of multinationals and a growing number of SMEs taking on property-related debt. It grew by almost EUR300 billion between 2002 and 2012 (a 276% increase), while that of the household sector increased by about half of that amount (a 218% increase)."

And what about those multinationals? "...even taking [the MNCs effect on corporate debt] into account, Irish corporate debt levels as a percentage of GDP continue to exceed the euro area average by about 80%." Oh dear...

Households? Household "sector remains among the most indebted in the euro area at 91.5% of GDP. Survey data show that 56.8% of Irish households are indebted, and 33.9% of them have a mortgage on their main residence". And the deleveraging process? Why, it is effectively coming out decreased consumption and investment: as pay-down of debt "was not matched by an increase in disposable income: as it remains subdued and consumption is still recovering, overall debt levels remain high... This is partly because average earnings remain relatively flat. Two thirds of all Irish mortgage holders continue to benefit from favourable ’tracker’ interest rates that keep the cost of mortgage servicing low."

The last bit begs a question: what happens when interest rates rise? The gas bit of all this Troika talk is that there are no estimated effects of rising interest rates on sustainability of Irish private sector debt. As if the rates will never, ever, for sure, for certain can rise again.

Pass the Kool-Aid jug, folks... for here's that sorry chart from the McKinsey folks that tells the tale of Irish 'deleveraging' in colour: 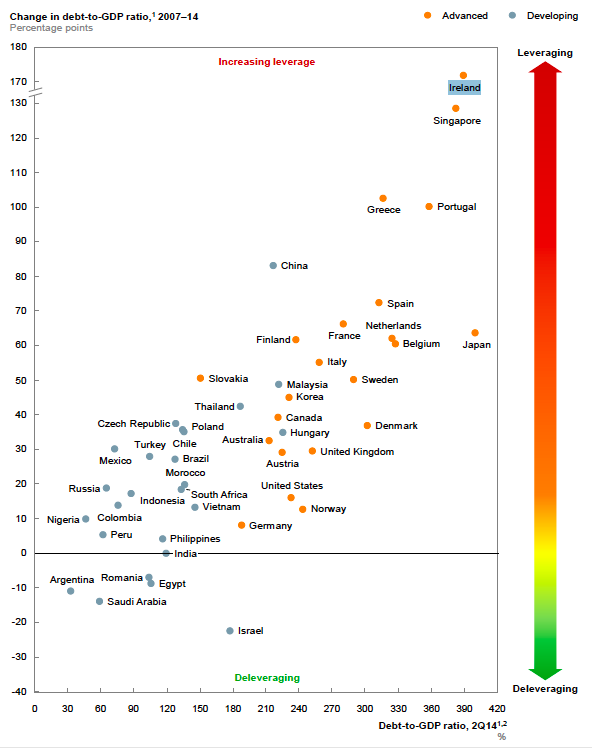