With all recent work-related excitement, I have delayed analysis of the Irish PMIs until now. So here's a look at the latest numbers.

Services PMI slipped slightly from the dizzying 'knowledge development box'-induced highs of 62.5 in January (62.6 in December) to still dizzying 61.4 in February. The slip-up is a minor hiccup on otherwise uninterrupted 'walk along the ceiling' the series been performing since April 2014. 3mo average performance of 62.2 in 3 months through February 2015, compared to already impressive 61.9 for 3mo average through November 2014 and up 1.9 points on vertigo-inducing 3mo average through February 2014.

Of course, these are strange numbers. More telling, probably are m/m changes. In last two months, PMIs posted m/m declines that now fully offset preceding 2 months rises. So things are flat in terms of growth momentum. One wonders how much of the level performance is attained by forex valuations? And how much is attained by MNCs activities in a handful of sub-sectors, as opposed to the firms trading in the indigenous economy? How much of the activity is down to tax optimising activities of the MNCs vs how much of it is down to actual and real activity by the MNCs? Alas, we won't ever know the answer to these questions.

Reports don't mention forex or currency valuations. Investec did comment that increases in employment were recorded in all four of the "segments of the services industry surveyed by this report (TMT, Business Services, Transport & Leisure and Financial Services)". But we have no comparatives or even levels reported to us on employment or any other subcomponent of PMIs anymore.

Again, we have no idea what is driving these strong figures and what the breakdown is between MNCs and indigenous firms. How much of this performance down to 'contract manufacturing' - a new MNCs trick that is so distorting our national accounts, even IMF had to comment on it? How much is down to usual activities of double-Irish-knowledge-box etc?

Chart combining the two indices (in terms of their deviations from 50.0 expansion line): 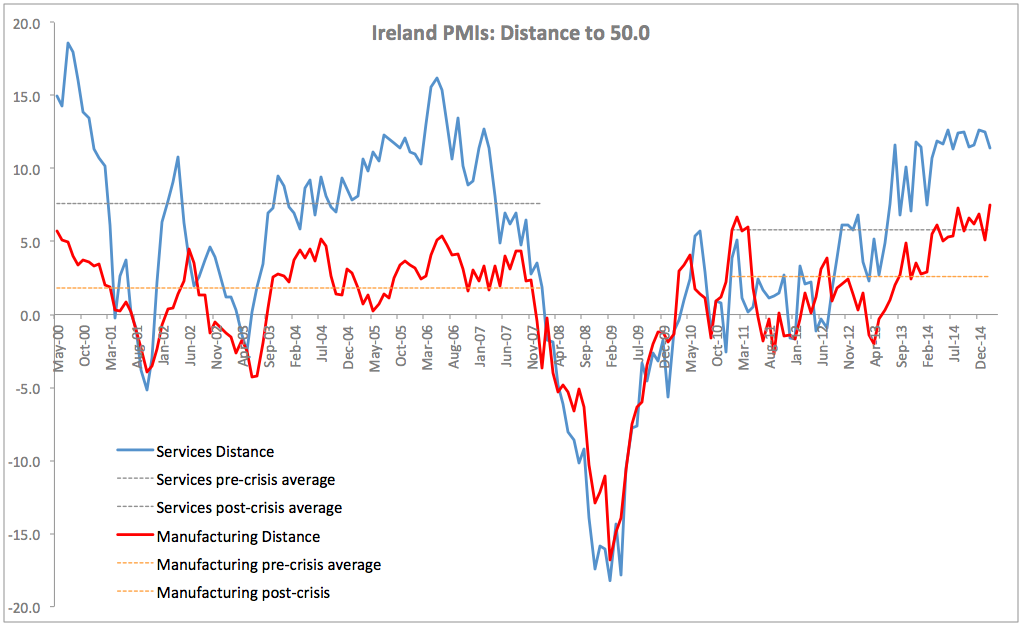 And a chart showing continued close co-movement in two sectors PMIs along with evolution y/y and 24 months: 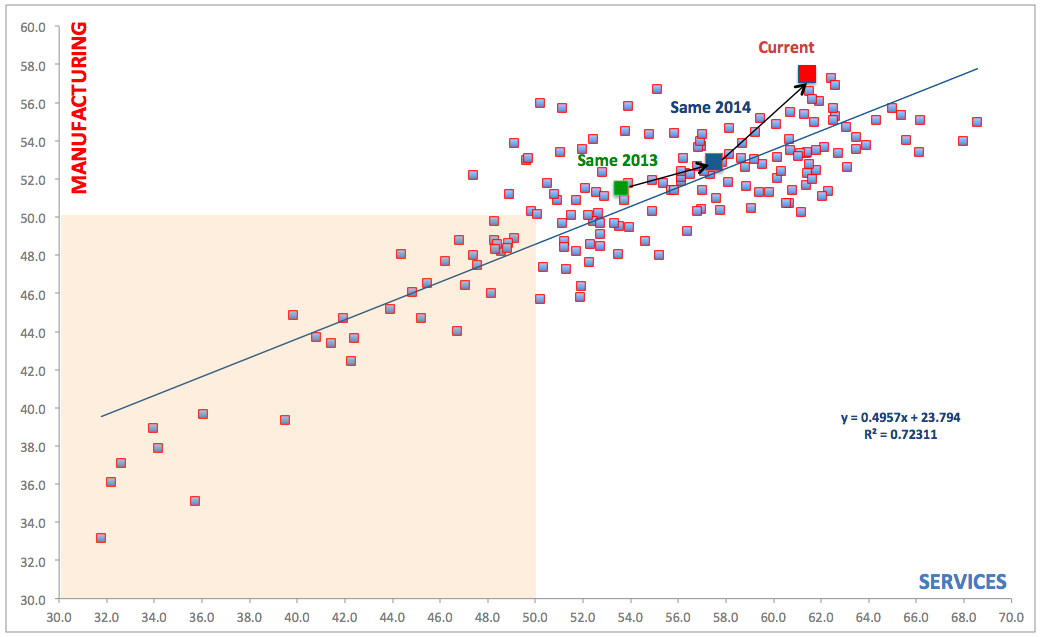 Overall: numbers are high and impressive. Questions remain as to what these numbers are really telling us, but on their surface they do suggests that somewhere serious growth is happening in something. May this translate into real growth in the Domestic Demand...

Posted by TrueEconomics at 10:06 PM