As BOFIT reported last week, 2014 marked the first year since 1999 crisis when Russian households experienced a decline in real household income. In 12 months through December 2014, real (inflation-adjusted) incomes declined by around 1% y/y, with the rate of decline accelerating to 5% y/y in November-December 2014, at the peak of the Ruble crisis. Even at the depths of 2008-2009 crisis, Russian real household incomes stayed in positive growth territory, as chart below illustrates: 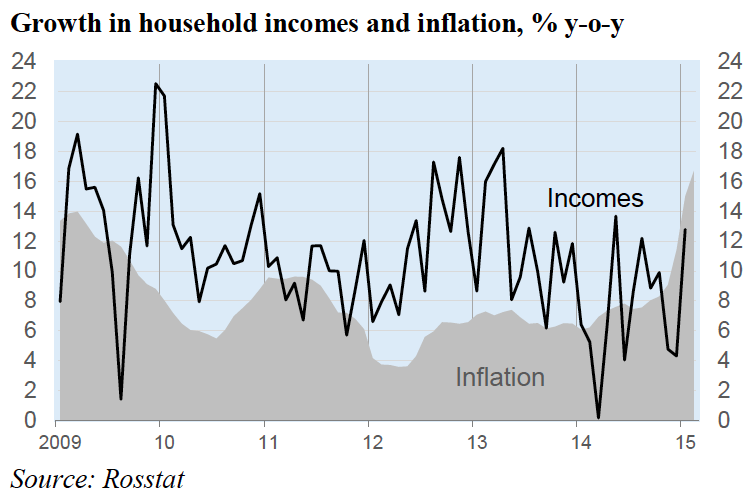 One area of severe squeeze on actual (nominal) incomes has been in the public sector. As BOFIT noted: "As recently as 2013, public sector wages were rising nearly 20% a year. By the end of 2014, however, on-year nominal wage growth had fallen to zero, while inflation was running at 11.4%. Hence, real wages in the public sector fell substantially." Private sector wages shrunk by around 2% in dealt terms, y/y. Pensions rose by about 10% y/y in 2014, still below inflation increases.

As BOFIT reported: "The average 2014 wage (excluding grey-sector wages) was about €650 a month. In January this year, due to a massive drop in the value of the ruble, the average monthly wage was only about €450. The average pension last year was €220 a month, but in January, that amount had fallen to just €150."

Going forward, both public and private sectors are facing tough times in terms of wages growth. Meanwhile, composition of inflation - especially rapid inflation in food and other staples prices - is more significantly impacting retirees. As the result of inflation in food sector, Rosstat has revised its formula for the cost of consumer goods and services basket, increasing the relative weight of food by almost 1 percentage point to 37.3% of the total household spending. This means that going forward, higher inflation in food sector will have greater impact on CPI. And we can probably expect that higher inflation. 2014 was near-record crop year that is unlikely to repeat. Meanwhile, Russian agriculture is suffering from dire need of modernisation capes that is nowhere to be seen. There is some room for imports substitution via increased domestic production and via alternative supplies from outside the EU, US and other economies that imposed sanctions and suffered Russian counter-sanctions, but that substitution is severely limited by:


Neither has much to do with sanctions: in the current oil price environment, lending to Russian corporates, even if it were available outside sanctions, would have been very subdued and expensive.

To lift production in the sector, the Government needs to simultaneously:

Posted by TrueEconomics at 4:50 PM