According to Bloomberg, US companies are stashing some USD2.1 trillion of overseas cash reserves away from the IRS: http://www.bloomberg.com/news/articles/2015-03-04/u-s-companies-are-stashing-2-1-trillion-overseas-to-avoid-taxes?hootPostID=ffda3e167ae0ebabc3da4188e9bd22de

Ireland is named once in the report in a rather obscure case. Despite the fact we have been named on numerous other occasions in much larger cases. But beyond this, let's give a quick wonder.

2) Last month, Services activity index for Ireland posted a massive spike: overall services activity rose 12.59% y/y, the dynamic similar to what happened in Q2-Q3 last year with goods exports (Q1 2014 y/y +8.2%, Q2 2014 y/y +12.9% and Q3 2014 y/y +17.9%). Even more telling is the composition of Services growth by sectors: wholesales & retail trade sector up 8.83% (a third lower than the overall growth rate), transportation and storage - ditto at 8.4%, admin & supportive services +2.91%. Accommodation and food services posted rapid rise of 14.03% and professional, scientific & technical activities rose 13.97%. Meanwhile, tax optimisation-driven information & communication services activity was up 21.15%. What could have happened to generate such an expansion? Anybody's guess. Mine is 3 words: "knowledge development box" - a non-transparent black-box solution for tax optimisation announced as a replacement for the notorious "double-Irish" scheme. So let's suppose that half of the services sectors growth is down to MNCs and will have an effect on our 'exports'. In Q3 2014 these expanded by 13.4% y/y and in Q2 by 10.8% - adding EUR5,560 million to exports. January data on services activity suggests, under the above assumption, roughly the same trend continuing so far, which by year end can lead to a further MNCs-induced distortion of some EUR11 billion to our accounts on foot of Services sectors exports.

Take (1) and (2) together, you have roughly EUR21-22 billion of annual activity in the export areas of services and goods sectors that is likely (in 2015) to be down to MNCs washing profits through Ireland through just two schemes.

Then there are our factor payments abroad - what MNCs ship out of Ireland, in basic terms. As our total exports of goods and services been rising, the MNCs are taking less and less profit out of Ireland. Chart below sums these up. While profitability of MNCs is rising - a worldwide trend - Ireland-based MNCs remittances of profits are falling as percentage of exports. 2008-2012 average for the ratio of net remittances to exports is 18%, which suggests that even absent any uplift in profit margins, some EUR27.5 billion worth of profits should have been repatriated in Q1-Q3 2014 instead of EUR22.16 billion that was repatriated - a difference of EUR5.36 billion over 3 quarters or annualised rate of over EUR7.1 billion. Factoring in seasonality, the annualised rate jumps to closer to EUR8 billion.

Let's check this figure against aggregate differences in 2008-2014 GDP and GNP. The cumulated gap between the two measures, in nominal terms, stands at EUR201.3 billion, closer to EUR204 billion once we factor in seasonality in Q4 numbers to the estimate based on Q1-Q3 data. The above estimate of EUR29.97 billion in 'retained' profits implies, over 7 years a cumulated figure of EUR209.8 billion, or a variance of EUR827-1,200 million. Not much of a margin of error. I'll leave it to paid boffins of irish economics to complete estimates beyond Q3 2014, but you get the picture.

And now back to points (1) and (2) above: how much of the Irish growth in manufacturing and services - growth captured by one of the two exports accounts and by the likes of PMI metrics and sectoral activities indices is real and how much of it is an accounting trick? And what about other schemes run by the MNCs? And, finally and crucially, do note that contract manufacturing and knowledge development box types of tax optimisation schemes contribute to both GDP and GNP growth, thus completing the demolition job on Irish National Accounts. There is not a number left in this economy that is worth reading.


Update: we also have this handy graphic from the BusinessInsider (http://uk.businessinsider.com/us-corporate-cash-stashed-overseas-2015-3?r=US) charting the evolution of U.S. MNCs stash of cash offshore: 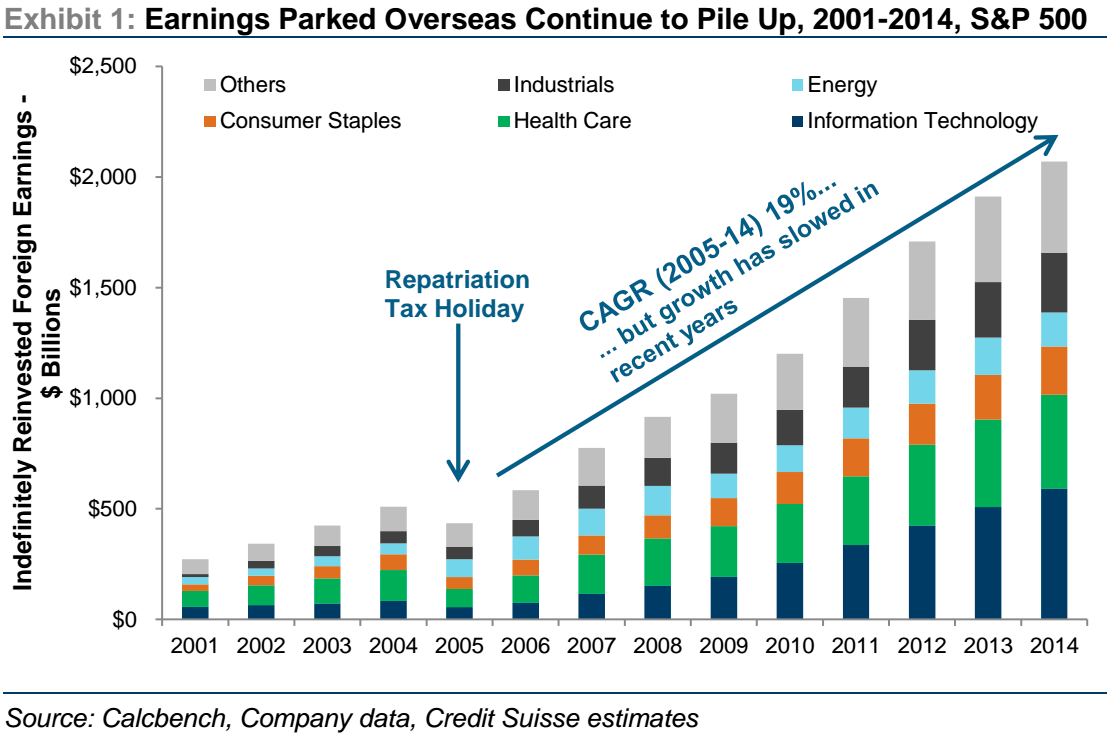 Posted by TrueEconomics at 7:20 PM