BOFIT published their new forecasts for the Russian economy. Here is the summary with my comments:

Pre-conditions: "Russian economic growth has slowed for three years in a row, due to e.g. waning growth in the available labour force, capital and productivity. In addition, a slight decline in export prices, the Ukraine crisis, sanctions, Russia’s counter-sanctions and other negative measures, with the accompanying increase in uncertainty, slowed Russian GDP growth to just over 0.5% in 2014. ...The impact [of oil price drop in H2 2014] began to show in the early months of 2015, with a slight contraction in GDP. Without transient factors, the economy would already have contracted in 2014."

What transient factors supported growth in 2014?

External position forward: "Export volumes declined by 2%. Exports of crude oil and gas dwindled markedly, while exports of petroleum products continued to grow at a robust pace. As the fall in ex-port prices steepened, export income in the last months of 2014 was already well over 10% lower (in euro terms) than a year earlier. Import volumes declined by 7% in 2014 and have now been in decline for 1½ years. The decline steepened considerably towards the end of the year."

BOFIT forecasts for 2015 assume oil price at USD55 pb and above and sanctions and counter-sanctions to remain in place "unchanged for a relatively long period".

"The impact of [oil price] change will be profound, since energy exports ac-count for almost a fifth of Russia’s GDP."

Do note: energy exports include not just crude petroleum and natural gas, but also refined products and electricity (including nuclear). This puts the Russian economy into perspective not usually considered in the Western media - the economy is much more diversified than many believe and claim. Further note, energy (total energy, not just oil and gas) accounts for just over 60% of total exports income.

Outlook summary: "...Russian GDP will contract by over 4% in 2015. The high degree of uncertainty will cause a shrinkage in private investment, while private consumption will be cut particularly by rapid inflation. Even though Russian imports have already edged down, they are estimated to fall further, by one fifth, in response to the sharp depreciation of the rouble during the last months of 2014. In 2016–2017, global economic growth and world trade will pick up, and it is assumed the oil price will rise to around USD 65 a barrel. The Russian economy is expected to continue slightly downward, before a slow recovery in 2017. The drop in investment is expected to flatten out towards the end of the forecast period. With real household income remaining low, it will also take time for private consumption to recover. Export volumes will grow at a very subdued pace. Imports will recover after 2016."

All in-line with my own outlook.

Private consumption "…will decrease substantially in 2015, and slightly further in 2016" driven primarily by inflation eroding household incomes and weak prospects for growth in private sector wages in nominal terms and public sector wages expansion below the rate of inflation. Notably, "the government is also seeking to cut the number of public sector employees." BOFIT expects pensions to "barely keep pace with inflation, at best".

Household credit will remain subdued, "even though the debt-servicing burdens stemming from payback of short-term loans will ease gradually. As during the crisis of 2009, savings may be rather substantial."

Public consumption "will decline amid pressures on the central government finances."

Investment "…will dwindle substantially this year and next. Private investment, in particular, will be depressed by a number of uncertainties relating to the ongoing tensions in East Ukraine, uncertain prospects for sanctions and the unpredictability of Russian economic and trade-related measures stemming from possible additional sanctions and recession countermeasures." So no surprises, then.

Fiscal side: "…the federal budget deficit is set to grow so large in 2015 (to about 3.5% of GDP) that the government Reserve Fund may be eroded by as much as a half. It is possible that support measures will be implemented using government bonds (as in the bank support operations in December 2014, which amounted to 1.4% of GDP). The support operations can also draw on debtors’ bonds (as in the funding of the state-owned oil giant Rosneft, which was just under 1% of GDP)."

The longer-term outlook is deteriorating: "The foundations of growth are being eroded by the contraction in private investment. Government spending is focused increasingly on defence and pensions, while public investment is subject to the largest cuts." 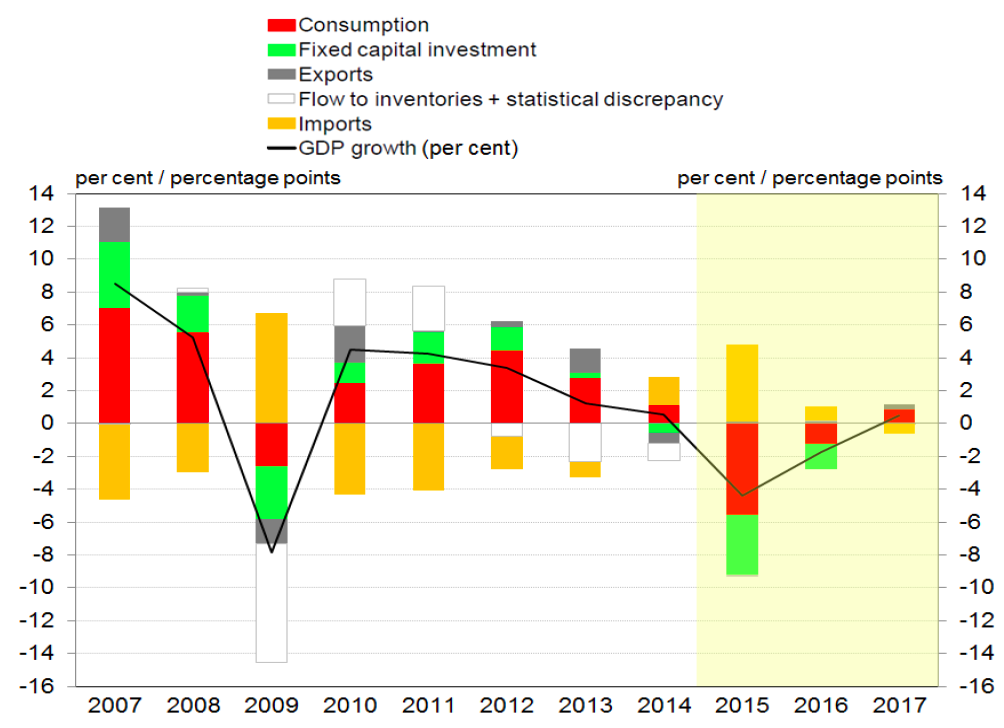 Posted by TrueEconomics at 12:55 PM