The first issue - the fundamental one - relates to the basic philosophy of 'reporting' the data. CSO's publication on RSI was headlined "Retail Sales volume index increases by 1.0%". The first paragraph of the 'analysis' reads (emphases are mine):

This, to me, as an example of the poor application of economics to what is essentially a purely economic data series. And it is also an example of poor statistical analysis. Here is why:
Of course, you might object, saying - hey, you should have read the first paragraph, mate. Not just the headline. Alas, our politicos making bullish noises about turnarounds can't be relied upon to do this much. "It's the good news, folks! Retail sales are up year on year".

CSO has more disturbing analysis presented in the latest release. Paragraph two, in fact, is about as manipulative, as the preceding text:

"A number of sectors showed year on year increases in June 2010, with the most
significant being: Motor Trades up 13.9%, Non Specialised stores up 1.4%, Clothing, Footwear and Textiles up 2.6%".

Now, let's take a look at CSO own data to decipher the spin in the above statement:
Here is another good look at the CSO own data, not brought up to anyone's attention by CSO:
So to do what I usually do on this blog - here are updated charts plotting actual data (no spin): 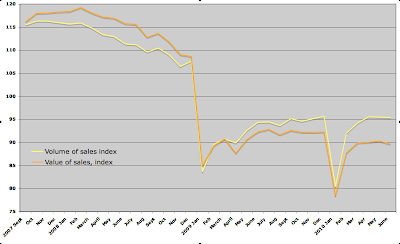 If you look closely at the last three months in the series, you can see continued deterioration pressures in both. But to highlight this trend - check out the chart below: 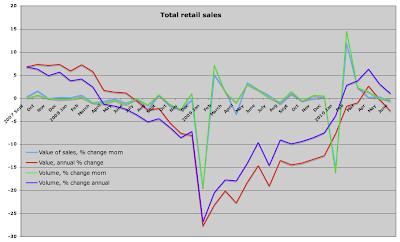 Monthly changes are now in the negative territory, and a positive annual volume bounce of the first quarter 2010 is about to be exhausted. 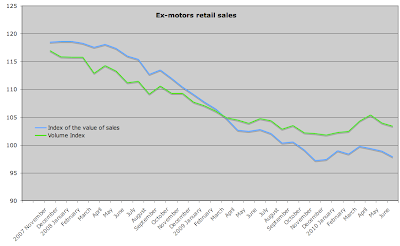 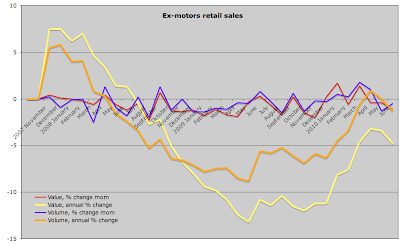 Why wouldn't CSO just report data, plus charts and leave 'commentary' to others? At least they would be purely objective reporters of data, instead of playing the amateurish 'Spin Economics' commentators?
Posted by TrueEconomics at 9:15 AM

Contantin your conclusion applies to every department of Irish government. Truth is secondary to spin .As we all know this dishonesty delays delivery of facts.Also the constant lie of "we have turned the corner" has us as a nation daydreaming beside the cliff.
We have experienced the biggest binge (not boom ) by an economy since Christ.We are in the biggest bust outside of wartime.We have a bluffer as minister for finance and a biffo as taoiseach with selfish rats around them.
It will be easier to refloat the Titanic than Ireland Inc.if we don't change course quickly.
Keep up the great work. WPower.

Yeah.....wait until the DoE decides to publish house price data again....but you could not spin that so you will not see it...