This is a lengthy post - to reflect the importance of the issue at hand. And it is based largely on data from Professor Brian Lucey, with my added analysis.

The proposition that this post is proving is the following one:

Far from being harmed by competition from foreign lenders, Irish banking sector has suffered from its own disease of reckless lending. In fact, competition in Irish banking remains remarkably close (although below) European average and is acting as a stabilizing force in the markets relative to other factors.


I always found the argument that ‘too much competition in banking was the driver of excessive lending’ to be an economically illiterate one. Even though this view has been professed by some of my most esteemed colleagues in economics.

In theory, competition acts to lower margins in the sector, and since it takes time to build up competitive pressure, the sectors that are facing competition are characterized by stable, established players. In other words, in most cases, sectors with a lot of competition are older, mature ones. This fact is even more pronounced if entry into the sector is associated with significant capital cost requirements. Banking – in particular run of the mill, non-innovative traditional type – is the case in point everywhere in the world.

As competition drives margins down, making quick buck becomes impossible. You can’t hope to write a few high margin, high risk loans and reap huge returns. So firms in highly competitive sectors compete against each other on the basis of longer term strategies that are more stable and prudent. Deploying virtually commoditized services or products to larger numbers of population. Reputation and ever-increasing efficiencies in operations become the driving factors of every surviving firm’s success. And these promote longer term stability of the sector.

Coase’s famous proposition about transaction costs provides a basis for such a corollary.

This means that in the case of Irish banking during the last decade, if competition was indeed driving down the margins in lending (as our stockbrokers, the Government and policy analysts ardently argue today), then the following should have happened.

In Ireland, of course, during the alleged period of ‘harmful competition’ exactly the opposite took place. Let me use Prof Brian Lucey’s data (with added analysis from myself) to show you the facts.

Secondly, banks reduced their assets and liabilities diversification (charts 1-3 below) setting themselves up for a massive rise in asymmetric risk exposures.

On the funding side, out went customers deposits, in came banks deposits, foreign deposits and bonds and Irish bonds. 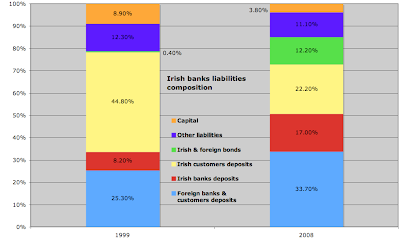 Capital ratios fell out of the way. 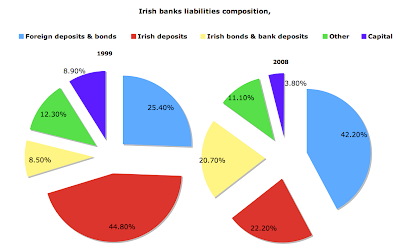 And so there has been a change in the world of Irish banking that no other competitive and mature sector of any economy has ever seen. Why? Was it because foreign banks started pushing the timid boys of BofI and AIB and Anglo and INBS out into reckless competitive lending?

You’ve gotta be mad to believe this sop. In reality, the Irish banks’ assets tell the story. 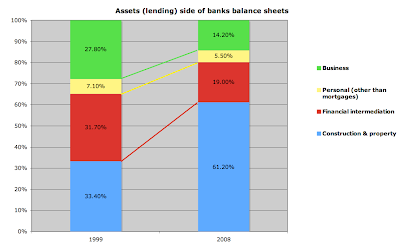 Business loans collapsed, personal loans (the stuff that allegedly, according to the likes of the Irish Times have fuelled our cars and clothing shopping binge during the Celtic Tiger years) actually declined in importance as well. Financial intermediation – the higher margin, higher risk thingy that so severely impacted the US banks – was down as well. No, competition was not driving Irish banks into the hands of higher margin lending. It was driving them into the hands of our property developers. We didn’t have a derivatives and speculative financial investment crisis here – the one that was allegedly caused by the foreign banks coming in and forcing our good boys to cut margins on run-of-the-mill ordinary lending. No, we had an old fashioned disaster of construction and property lending.

And this lending could not have been driven by foreign banks. It came from the total expansion of credit in the economy, presided over by our Central Bank and Financial Regulator, our Government and ECB. 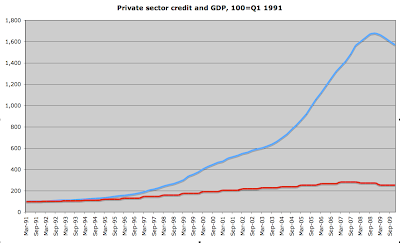 Just how dramatic this change was? Take a look at the ratio of private sector credit to national income in the chart below. 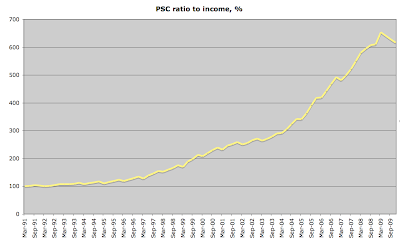 Even a child could have seen the bust coming. The reason that our Financial Regulator and Central Bank failed to see this, despite publishing all this data in the first place, is that they were simply not looking. The former probably obsessed with the pension perks, the latter – well, may be because all the fine art in the Central Bank’s own collection was just too much of a distraction. Who knows? But judging by the above chart lack of significant correction during the crisis – we know who will pay for this in the end. Us, the taxpayers. 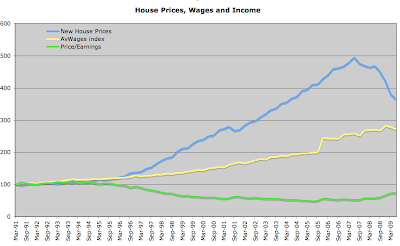 As chart above shows, the fundamentals for the boom – in lending and in construction – were never there, folks. And the banks missed that completely. As did our regulators and our policymakers. Brian Lucey of TCD School of Business provides evidence on what was really going on in the Irish banks (again, note that some of the analysis below is mine). 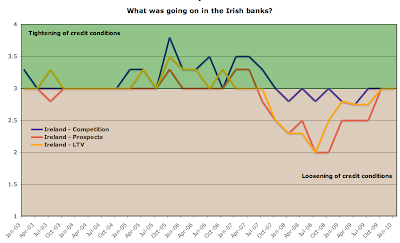 Chart above, based on the Central Bank Credit Survey, basically shows the impact three major forces: expectations of increased competition by the banks, improved banks outlook on the Irish economy three months ahead, and LTVs expectations had in Irish banks willingness to increase lending. Scores above 3 represent tightening of credit conditions (as in banks expecting to cut lending to households), while scores below 3 show forces driving looser credit to households.

If the proposition that foreign banks competition pressures drove Irish banks into looser credit supply were to be correct, one would expect the blue line above to reach far deeper into ‘below 3’ scores than the other two lines. Alas, it did not dip. In fact, competition from other banks was recognized by Irish Bankers themselves to be the least improtant factor contributing to credit supply expansion. Instead, their over-optimism about economic prospects (red line) and their willingess to give away cash at massively inlfated LTVs (the orange line – also a proxy for Bankers’ optimism regarding future direction of house prices) were the two main drivers of credit boom.

Where’s the evidence on ‘harmful competition’ that so many Central Bank leaders, the stockbrokers and Government spokespersons have decried in recent past?

The delirium of our bankers was actually so out of any proportion that, as the surveys data shows, even amidst the implosion of the housing markets since early 2008 they were still saying “hang on....we expect that changes in LTV and economic prosoects will cause us to loosen in the next 3 months". In other words, they were chasing the deflating bubble, not the imaginary foreign banks competitiors. 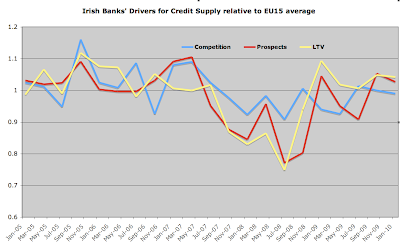 So, really, folks, competition in Ireland was actually more of a stabilizing force, than de-stabilizing one. LTV’s optimism and lack of realism in economic forecasts were the two main driving forces of the boom. 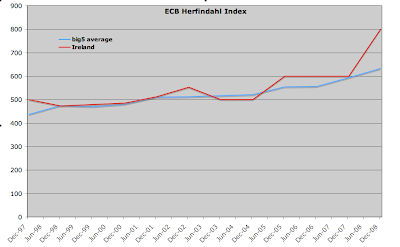 Again, what above shows is that on virtually every occasion, Irish reading for Herfindahl Index (measuring degree of concentration in banking sector) is in excess of the average Index reading for top 5 EU countries. In other words, there was no such thing as ‘too much competition’ going on in Irish banking sector. If anything, there was somwhat too little of it, compared to Germany, France, Italy, UK and the Netherlands.

And now, for the test of all of this. The chart below regresses each survey factor on the private sector credit index. The negatively sloped line – for LTV and economic prospect factors combined - shows that when this factor scoring in the survey increased, lending became tighter. Positively sloped line – for competition – shows that when competition pressures rose (factor reading declined), lending actually got tighter. And the statistical significance of the LTV and expectations factors is more than double that of competition... 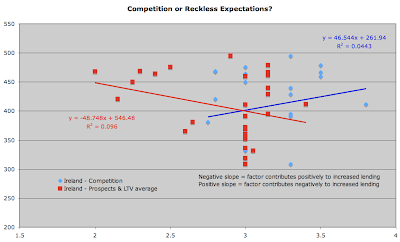 Let’s just stop talking nonesense about too much competition in Irish banking sector drove unsustainable lending. More likely – an anticiaption by our bankers that no matter what they do, they will never be allowed to fail by the state, plus an absolutely rediculous expectations about opur economy drove our banks to the brink.

Posted by TrueEconomics at 4:24 PM

I was looking at Coase in relation to something different this evening, by a coincidence. (With regard to the publication of the Moriarty Tribunal report on mobile phone licenses etc) Someone commented to me, "The Problem of Social Cost", which, arguably, is the document most influential in how the U.S. divvied up the electro magentic spectrum back in the 50s?

Dow Jones up to 10888, a gain of 102 points today.
Surprising given that the health reform bill will ensure higher taxes, therefore less money to invest in new business

Patrick: you are right. It is another bubble driven, this time again, by liquidity supply through fiscal and monetary interventions. Earlier today: "Resales of U.S. homes and condos fell 0.6% in February to a seasonally adjusted annual rate of 5.02 million, the lowest level in eight months, raising doubts about the durability of the housing recovery, the National Association of Realtors reported Tuesday. Sales of existing homes have fallen three consecutive months after rising steadily through the fall in response to a federal subsidy for first-time home buyers... Inventories of sales on the market jumped in February, rising 312,000 to 3.59 million, the highest since September."

If we really have a market driven by rational expectations at this point in time, I should really give up economic analysis...