CSO released an interesting set of new stats on price inflation in select services. Per experimental Services Producer Price Index (SPPI) average prices charged by domestic service producers to other businesses in Quarter 4 2009, were on average 4.1% lower in the year when compared with the same period last year.

The most notable changes in the year were:
Services Prices increased by 0.4% in the quarter. This compares to a decrease of 2.3% recorded in Q3 2009.

The most significant quarterly price decreases were in
There was an increase of 4.8% in Air Transport.

Now, what CSO report did not show is the following. While deflation in higher value added, human capital-intensive services was rather significant, mid-range value-added services saw much more moderate deflation, with low value added labour-intensive sectors such as security services holding up almost unchanged over time. Chart below illustrates: 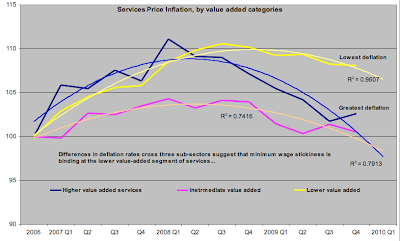 For all the talk about improved competitiveness, transport-related services costs are still on the upward trend: 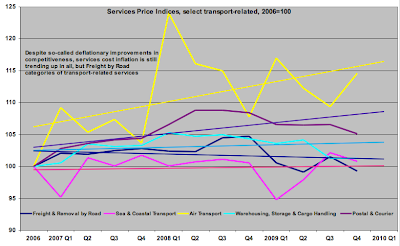 And this is before Carbon Taxes kicked in.

Another interesting point to be made here is that the first chart above appears to suggest that deflation is almost not happening at the level of sectors that are labour intensive - industries most impacted by the minimum wage. In more wage-flexible sectors, where human capital drives value added to much higher levels, inflation is running negative. This has two implications going forward, should this trend persist:

Posted by TrueEconomics at 6:46 PM

This "fear of deflation" is largely nonsensical. Deflation does not keep people from spending – they always spend what's necessary. And money NOT "spent" is then saved which means it is credit to someone who invests it for capital goods etc. thus it is again being spent, only not for consumption. Money never lies completely idle to any extent whether there's inflation, deflation, stability or a solar eclipse. For deflation to seriously happen, not only the current extreme credit expansion by the central banks and states (through "quantitative easing", stimulus packages, monetising and then spending national debt etc.) but also the money that was released into the economy PRIOR to the collapse would have to be "mopped up" again. This is nowhere to be seen nor would it be technically possible (confiscation aside) so we will rather see inflation than deflation.