I must confess, the last thing I expected in yesterday's quadruple whammy of one Ministerial speech, one Nama document release, a Central Bank statement and the Financial Regulator's decision was a joke. But there it was. For all to see, for few to notice.

Armed with a law degree-backed mastery of logic, Minister Lenihan has issued a statement that he will be requiring Irish Bankers Federation to run courses for the benefit of our bankers on how to lend money to projects other than property. That statement, coming from the Minister after he announced that the Anglo will be provided with up to €18.3 billion in taxpayers cash, and the rest of our banks will swallow billions more was worthy of a comedian. In an instant - we had a Minister for Finance throwing money at the banks which, by his own admission, have no idea of how to lend.

Anything else had to take a back seat to this farce. And it almost did. If not for another pearl of bizarre twist in the Nama saga. Recall that this Government has promised the world an arms-length entity to control and legally own Nama - the Special Purpose Vehicle arrangement which, in order to keep Nama debts out of the national debt accounts was supposed to be majority (51%) owned by external investors.

At the time of the original announcement of this arrangement I publicly stated that there was absolutely nothing in the Nama legislation precluding parties with direct interest in Nama from investing in this SPV. And boy, clearly unaware of such pithy things like conflict of interest, Nama announced that its majority owners will be:
In other words, the very institutions that will be benefiting from Nama's taxpayers riches will also own Nama and will comprise SPV board. They couldn't have given a share to Seannie Fitz and Mick Fingleton, could they?

Having a good laugh - even at the cost of tens of billions to us, the ordinary folks - is a great end for a day in the Namacrats land. So much for responsible and vigilant policies of the Government.

In its note on the first tranche of loans transferred, Nama provides a handy (although predictably vague) description of the loans the taxpayers are buying as of March 30, 2010. Table below summarizes what information we do have:

Let us take a further look at the data provided in the official release and the accompanying slide deck. 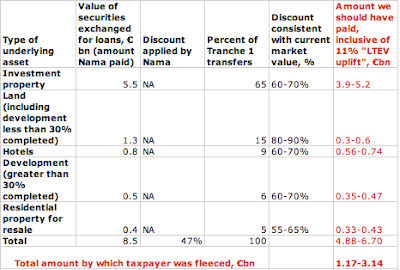 Applying more realistic valuations on the loans transferred against the average Nama discount, while allowing for 11% assumed LTEV uplift (Nama own figure), net of 2% risk margin - the last column in the above table shows the amounts that should have been paid for these assets were their valuations carried out on the base of March 30, 2010 instead of November 30, 2009 and were the discounts applied reflective of realistic current markets conditions.

Thus, in the entire first tranche of loans, Nama has managed to overpay (or shall we say squander away) between €1.2 and €3.1 billion - a range of overpayment consistent with 14-37% loss under the plausibly optimistic assumptions. Returning this loss across the entire Nama book of business and adding associated expected costs of the undertaking implies a taxpayer loss of €9.6-25.3 billion from Nama operations.


In Nama statement, Brendan McDonagh, Chief Executive of NAMA said: “Our sole focus at NAMA is to bring proper and disciplined management to these loans and borrowers with the aim of achieving the best possible return and to protect the interests of the taxpayer. ...NAMA is willing to engage with an open mind to our acquired clients ...”

Pretty amazing, folks - Nama CEO clearly sees the borrowers as his 'clients', while claiming that his organization objective is to benefit the taxpayers. Would Mr McDonagh be so kind as to explain the difference? Is Nama going to serve the 'clients' or is it going to protect the taxpayers? The two objectives can easily find themselves at odds - the fact Mr McDonagh is seemingly unaware of.
Posted by TrueEconomics at 6:44 AM

Another day, another reason to be disgusted with the rotten republic.
The only rational move is to move from the Irish state, your business if you have one, or your home. The Government seems to believe it can squeeze the taxpayer for the next few decades and channel this revenue into interest payments on these huge loans while at the same time providing a skeleton public service. The sooner the whole system crashes and has to be rebuilt the better for everyone.

Brilliant analysis. Thank you. Cheerleaders in the media for NAMA should read this.

For a laymans guide to the SPV process see www.SPV.ie

A group of outraged citizens are organizing a protest against further cash injections into Anglo Irish Bank. We will all gather tomorrow morning, April 1st, 10:00 am outside the Kildare Street entrance to the Dail to protest the corrupt actions of this government.

I realize the time might not be convenient for everyone, but democracy rarely is convenient.

One of the most beautiful traits of Irish citizens is their ability to trudge through tough times, but that same trait allows for an inertia of the populace. If we were French, we wouldn't allow this to happen to our country.

It is our country and we are morally culpable if we allow good people to stand by and say nothing.

History creeps up on us--now is a call to action for any Irish patriot.

The next joke in NAMALAND is when the 280 million AIB dividend falls in MAY> Remember AIB market capacity is 1 billion, therefore government will be forced to take 25% of AIB bringing total to 50% of AIB even before AIB attempts to raise 7.4 billion,
ClOUD CUCKOO LAND