Exchequer returns are in for February (DON'T PANIC sign on the cover) - and things are going just as poorly as was predicted. Well, slightly worse, actually. Few charts to illustrate the trends: 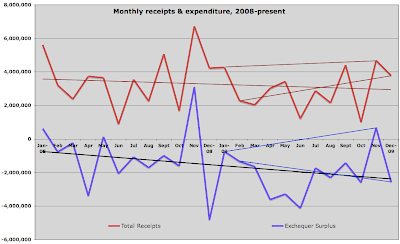 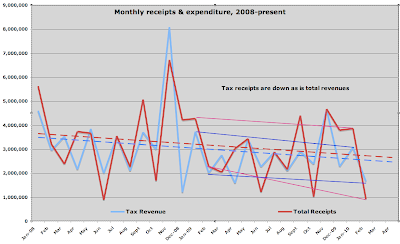 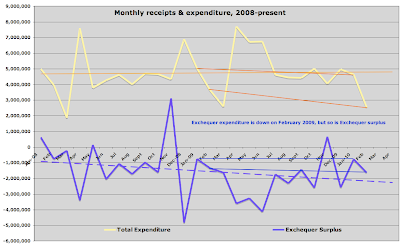 Total expenditure is improving. But exchequer surplus is deteriorating.
What's going on?
At €1.66 billion, receipts in the month were a modest €64 million or 1.3% behind DofF budget forecast. On annualized basis this means something to the tune of €455 million shortfall… small stuff… but.
February income taxes are tanking – down 11.8% on 2009 (-€246 million).
But wait, this was actually the second best performing tax head of all… Table below illustrates 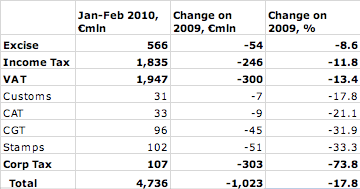 Now, February, seasonally is a low tax revenue month – accounting for around 5% of annual revenue. But this time around, February total tax receipts were down 17.8% on 2009. In two months of the year, the same figure is 17.7% - not much of a change… certainly not enough to say things are improving. Oh, sorry, no – they are actually deteriorating!
How come DofF can be happy about these dismal results? Well, for the first time in over 2 years of this crisis, DofF estimates are sticking! Even if only for two months so far. Budgetary projections assume tax revenue of €31.05bn in 2010 or 6.02% below 2009 figure. So far, seasonally-speaking, we have seen roughly 15% of annual tax revenue coming in at roughly speaking 18% below 2009. So should the trend continue flat from here on, we have lost 2.7% or almost half of the allotted annual deterioration! Slightly better than Nama spending its entire legal costs allowance for the year in two months of work, but still... not a record to be proud of.
And on the spending side things are a bit bleak and bleaker: most of the spending decline to date has been on the capital side. In fact, capital expenditure – remember, Brian Cowen and Brian Lenihan have both claimed in 2008 that capital spending will be our stimulus – is down 25% in February (annual terms). In January, this decline was 21%, so the drying up of the ‘stimulus’ is accelerating.
Of course, it is current expenditure where most of fiscal waste rests and where the entire structural deficit is hidden. So one would assume that here, there should be some sizeable cuts. In January 2010, in order to, presumably, impress ‘international markets’, DofF cut current spending by 12% in year-on-year terms. Happy times? Not really – in February this figure eased back to 8%. Even at a half this rate of a ‘forward retreat’, we will end 2010 with spending well in excess of 2009 total.
But, so far, through February 2010 total savings on current spending side add up to €567mln. Now, our structural deficit is roughly 8-9 percent after the Budget 2010 measures take place. Which means we need to cut roughly €5.5 billion in annual spending. At the rate of current cut-backs we are achieving €3.4 billion, under very optimistic assumptions that the current rate of cutbacks will be sustained.
Posted by TrueEconomics at 7:36 PM

What I don't understand is how the national debt figures into this. We're servicing 77bn of debt. Is that already figured in when the govt says that there is a 5.5bn spending deficit, or is it artfully excluded?

You may be giving the DoF slightly more credit than they deserve. Yes, the Department's Jan-Feb forecast of €4.8 billion in tax revenue is only out by €64 million or 1.3%, but this forecast was made AFTER they knew that €3.074 billion had been collected in January.

They only had to predict the outturn for February. The monthly predictions were released with the January Exchequer Statement on Feb 2.

Here they predicted an outturn of €1.726 billion for February. The actual outturn of €1.662 billion gives a forecast error of -3.7%. Still reasonable, but nearly three times greater than what they will claim.

More fun and games with the Department's forecasts here.