If you believe in fairies and elves and the story of the MNCs carrying out out of the slump driven by collapse of domestic economy, then you are in a recovery, friend.On an annual basis production for Manufacturing Industries for January 2010 was 2.3% higher than in January 2009 (chart) per CSO’s latest data. 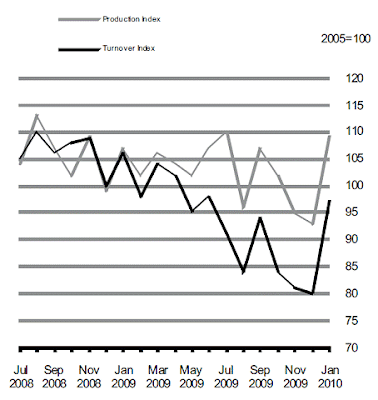 The drivers of this change were:
In other words, really, folks – fewer PCs many more Viagras. Time to pop that vintage champagne out.Hold on – there’s seasonality here, clearly, plus volatility. So the seasonally adjusted volume of industrial production for Manufacturing Industries for the 3 month period November 2009 to January 2010 was 2.7% lower than in the preceding three month period.What happened there?The “Modern” Sector, comprising a number of high-technology and chemical Sectors – all are MNCs led – showed an annual increase in production for January 2010 of 4.8%.

A decrease of 3.6% was recorded in the “Traditional” Sector (the one our folks at L28 wanted to stimulate via expensive borrowing and semi-state companies – good luck extracting here any sort of meaningful returns on ‘investment’).More significantly, the seasonally adjusted industrial turnover index for Manufacturing Industries fell 1.5% in the three month period November 2009 to January 2010 compared with the preceding three month period. On an annual basis turnover was 8.8% lower when compared with January 2009. This makes me worry – turnover is down output is up and there is no deflation globally. What’s happening? Have falling value of the Euro been impacting the revenue we collect on transfer-pricing from the ? Likely – inputs prices are appreciating with the dollar, output prices are falling with the euro. In the end, less dosh for us.

PS: what do you think these figures are doing to the hopes of the high value-added private sector jobs creation - the one that promises us to deliver 105K new jobs via IDA and another 150K new jobs via FAS/DETE etc 'Innovation frameworks'?

Let me tell you a quick tale: on the day of Taoiseach's launch of the Innovation taskforce report, TCD academics received a 'No' answer to their joint (with Innovation Centre) application for a post of a lecturer in entrepreneurship and innovation. Knowledge economy, it seems, per some decision-makers somewhere, does not need research and teaching in either entrepreneurial aspects of innovation or business aspects of the same. So much for 'commercializable R&D'... Oh, yes, the post was planned to be self-financing via expanded teaching programmes, as far as I am aware.

Posted by TrueEconomics at 10:27 AM

"TCD academics received a 'No' answer to their joint (with Innovation Centre) application for a post of a lecturer in entrepreneurship and innovation."

In IT Tralee the college focuses a lot on entrepreneurship. There is the Kerry Technology Park adjacent to the college. I cant understand Constantin why TCD was refused a lecturer post.