Ireland was put on notice in the EU Commission assessment of fiscal positions going forward. per FT report today: European Commission warned eight countries, including Germany, France, Italy and Spain, Austria, Belgium, Ireland and the Netherlands that their forecasts for fiscal deficits reduction and growth for the next 4 years are basically failing to meet reasonable tests of robustness and that they need to identify exact measures they will take to meet their medium-term deficit reduction targets of 3 per cent or less of gross domestic product.

This is a second round of warnings covering Ireland's budgetary plans after earlier this month the ECB has qualified its assessment of Euro area fiscal consolidation measures with a statement, in the case of Ireland, referring to the lack of clear evidence on the ways in which the target will be achieved (see ECB Monthly Bulletin, 03/2010 page 85).

The warnings - usually a saber-rattler, and nothing more - but this time around it is a serious note. The reason is simple. It now appears that Germany is set against a direct bailout for Greece, pushing instead for joint IMF/Euro area action backed primarily by IMF. Here is the background on this:

Bloomberg reports (here) that Michael Meister, the CDU’s finance spokesman, said: “We have to think about who has the instruments to push for Greece to restore its capital-markets access... Nobody apart from the IMF has these instruments,” and that attempting a Greek rescue without the IMF “would be a very daring experiment.”

Angela Merkel told the German parliament yesterday: “The problem has to be solved from the Greek side and everything that is being considered has to be oriented in that direction.”

This clearly implies that fiscal deficits corrections will have to be pursued by countries in the environment where the markets cannot price in collective risk averaging within the Euro area, which in effect means that spreads between German and PIIGS bonds yields will have to rise and stay elevated through 2014. And this, in turn, means Ireland is now exposed to a potential sever credit crunch on the Government side.

And there is an even greater threat for Ireland, as Irish Exchequer is much more dependent on the good will of German banks than any other Exchequer in the PIIGS club (see chart below, courtesy of http://spaineconomy.blogspot.com/): 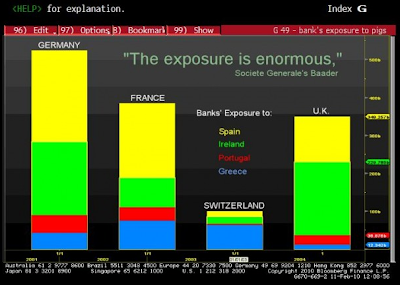 Frightening, especially since the chart is expressed in Euros, which of course puts us well ahead in proportional terms of Spain, not to mention Portugal and Greece, for all countries, except Switzerland.
Posted by TrueEconomics at 12:55 PM

You wrote not so long ago about the probability of euro/ dollar parity. Do you see an IMF bailout of Greece negating this possibility?

No, Sean. I see any bailout as a pressure to devalue. If it comes through IMF, the pressure should be even stronger as IMF information flows are much more transparent than anything the EU might put together. And this means shorter and fuller pricing. Any rescue package for Greece will require expanded money supply and extended lower rates period for the Euro, which means in the medium term downward pressure on the Euro. Short-term, of course, as usual, FX rates remain unpredictable.

In addition, I will be blogging on this later, I see a very serious risk of a structural depression (not recession) in the Euro zone in line with a structural recession (not a depression) in global economy. These are linked to debt, fiscal profligacy and the over-stretched real economy. IMF or any other rescue for PIIGS will accelerate this process that presents severe mismatch of down risk for the euro relative to other global currencies.

i find it disturbing that a harmless animal such as the sable (Martes zibellina) should be rattled at sovereign governments, has'nt the ECB heard of animal rights yet?

Agreed, the sable is freed! Although they are not as harmless as they might appear...