Held back by work, I am only now catching up with data released this week by CSO, so do stay tuned - these pages will be featuring more analysis in days to come.

This is slightly better than my predicted annual declines of GDP to the tune of 7.3% and GNP to 11.5-11.7%. Nonetheless, as CSO admits, these figures mark historical record of declines.

Throughout the year, I have traced the paths for the main QNA series in charts. A picture, after all, is worth a thousand words. So here they are, updated for the latest figures: 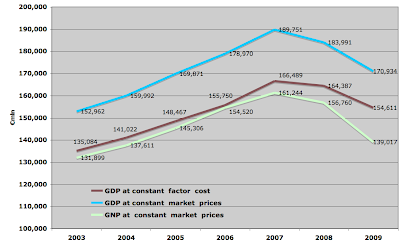 The first chart above shows GDP and GNP time series. Two things are apparent from these figures: first, all three series peaked at the same time - in 2007. This is significant for as we shall see below, the same does not hold for growth rates. Second, notice how factor cost-based GDP is showing more mild downward trend than market prices-based GDP measure? This suggests that deflation (market prices change) has been so far much more significant than declines in factor costs. This does not really bode well for our hopes of improving our competitiveness through this cycle.

Next chart shows components of GDP and GNP: 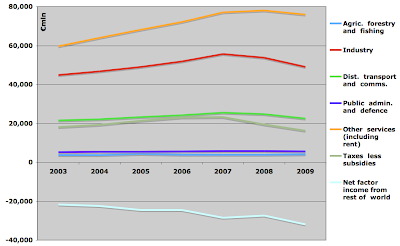 Notice how two state-supported sectors - public sector and agriculture (the latter supported, of course, via CAP) show no signs of a recession? Both are having jolly good time - courtesy of taxpayers (Irish and European). Also, do keep in mind that some of the public sector activities fall into other categories - e.g. transport was probably supported by the semi-state companies and their ability to ignore recession when it comes to hiking prices and charges (DAA is one good example here). So in real terms, private sector activity in each one of these sub-sectors is down by more than the CSO aggregates suggest.

Next chart illustrates another historic record: 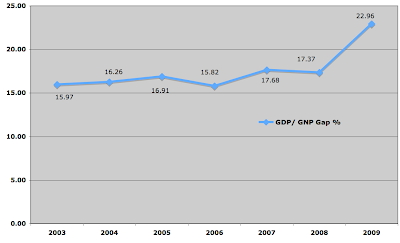 The gap between our MNCs-dominated exporting economy and our domestic economy is now at historic highs - reaching 23% in 2009. This means that almost a quarter of what Ireland claims to produce (GDP) is really an accountancy trick and has nothing to do with this country. Of course, for years we have been conditioned to think that we are filthy rich because our GDP is so high. Oh, how deep the fallacy runs.

Now, think about the core metrics of state solvency deployed in international markets. Take our national debt. At current €77.6bn (per NTMA) it officially stands at just 45.6% of our GDP (46.2% if we are to use more time-consistent estimate from Finance Dublin). In the real world, this figure should reflect our real national income, for we can't seriously expect the foreign MNCs to be responsible for Ireland's debt. So the real figure should be 55.5% of GNP. Almost a 10 percentage points spread.

Now, let's take our current position and take a peek into the future. Suppose we take last 6 years' average growth rates for respective series. How long will it take for our various measures of income (bogus GDP and more honest GNP) to bring us back to the prosperity of 2007? 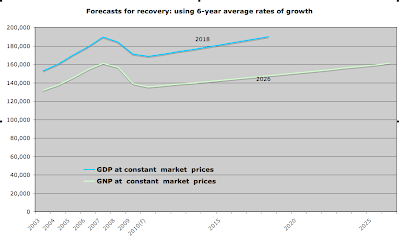 As chart above illustrates, should our MNCs continue racing ahead as they did up until now, happy days will come back to our shores again in 2018. Of course, relying on our domestic (real) economy to chug along as it did in 2003-2009 period means we will be back to 2007 levels of income some time around 2026. Mister Cowen can keep telling us that things have bottomed out and that all will be well once growth returns. Numbers are a bit more honest here.

What else did the QNA release give us that CSO omitted in its release? 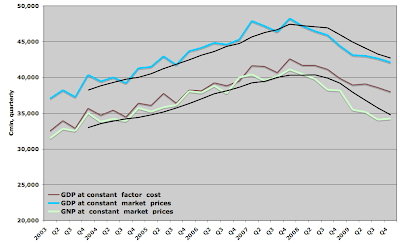 Notice how both GDP and GNP are running close to (but below) 4-quarter moving averages? This is the third time it is happening in the current crisis and every time it is followed by a renewed pull away from the MA line downward. GNP is seemingly poised to cross over in Q1 2010, posting a possible quarterly gain. Of course, this is just a momentum force, which has to be backed by fundamentals. And the fundamentals are still pretty nasty. But there isn't a hope of even a technical rebound indicated in the GDP line. So:
Only time will tell, but, here is an interesting snapshot. Remember the latest QNHS? Q4 2009 marked the return of Construction sector to the leading role in driving unemployment higher. This is collaborated by the following figure: 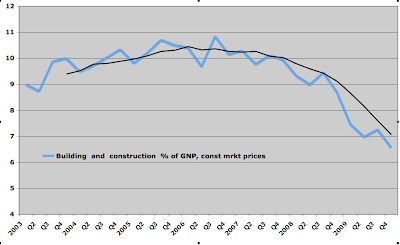 Activity in construction and building sector shows absolutely no willingness to move above the moving average line. If anything, it is still contracting at a massively rapid rate.

Lastly, let me show you an interesting chart on annual rates of change in the GDP/GNP series: 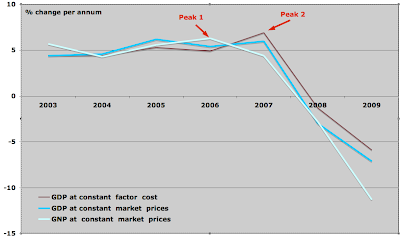 Notice that in contrast with levels in overall activity (the first chart above), growth rates actually peaked in two different years, with 2007 decline in the growth rate of GNP clearly providing a warning signal for the Government that things might be getting slightly unsteady. Coupled with what was going on at the time in the financial markets (remember, the crisis in financial markets started actually in July 2007), that was a warning shot. I recall interpreting it this way in a couple of my columns - back in Business & Finance and in the Sunday Tribune.

I will cover trade figures contained in QNA release in the later post dealing with overall trade issues, so do stay tuned.
Posted by TrueEconomics at 10:12 PM