I am back from a very enjoyable (as always) trip to Paris and some 150km beyond. Superb retrospective of Pierre Soulages' work in Pompidou - a real master of true dynamism. A mouthwatering Hans Hartung print (some examples here) and two lovely Soulages' prints as well - all in my favorite gallery Paul Proute SA - were hard to resist, but given we are in a depression, while the French art market seems to be only in a recession, judging by prices, resistance was a-must.

One telling tale - at a lovely dinner with a small group of friends in the countryside, conversation took a quick turn to corrupt politics. Our French hosts were lamenting about the state of their country politics by pointing to a scandal surrounding Nicolas Sarkozy's plans to appoint his failed-lawyer son to head the Epad, the development corporation of La Défense (see a note here). Epad is a state-sponsored body and the French nation was literally lifted to its feet when nepotist Sarko tried to push his baby-faced offspring into the CEO seat. In return, I recalled for our friends the story of Bertie Ahearne arrogantly telling the nation that he gave state jobs to his cronies not because they provided him with money but because they were his friends. My French hosts couldn't believe that such a statement did not cost Bertie his job leading to years of public investigations and pursuits through courts. Nor could they believe that Bertie's friends are still, mostly, in their places of power.


Now, a couple quick notes relating our own troubles.

Stijn Claessens, M. Ayhan Kose and Marco E. Terro have published their excellent paper "What Happens During Recessions, Crunches and Busts?" (I wrote on it before based on the working paper version here) in Economic Policy, Vol. 24, Issue 60, pp. 653-700, October 2009. Here are couple interesting illustrations: 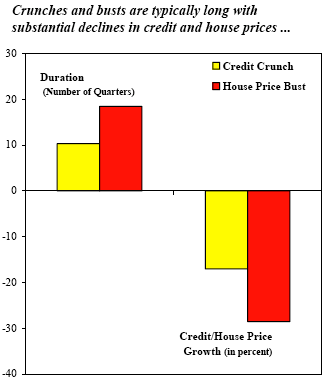 So per above, combined duration of contractionary segment of the credit crunch and housing price bust can be expected (on average) to last approximately 30 quarters (timing the current Irish crisis to last from Q1 2008 through Q2 2015 if the rate of house price bust and credit contraction here in Ireland was close to an average of the countries surveyed by the paper).

The latter 'if' is a serious assumption to make. Claessens, Kose and Terro show that the average bust/contraction is associated with a roughly 18% fall in credit supply and 29% decline in house prices. Of course, in Ireland, we are already seeing a 70% decline in credit supply and a 40-50% decline in house prices. So make a small adjustment - back of the envelope - to account for these and you get expected the current contraction/bust crisis to last more than 52 quarters, taking us well into the beginning of 2020 before the recovery truly takes hold.

And this dynamic is seemingly also in line with Claessens, Kose and Terro data on the impact of crises on GDP. 2008-2010 Irish GDP is expected to fall by some 13.5-15%. This is approximately 2.5 times the depth of the average adjustment associated with credit crisis and house price bust per Claessens, Kose and Terro, as illustrated in their chart reproduced below: 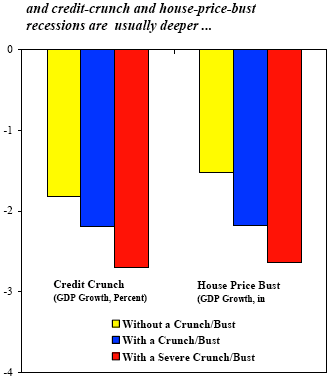 Oh, and for those 'advisers' who are telling Minister Lenihan that Ireland will recover from this crisis along the same trajectory as the 'average' OECD economy (the same advisers who are talking of 8-year cycles in property prices), here is how average Irish crisis is compared to the rest of the modern world history: 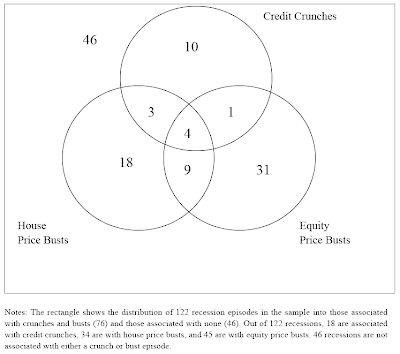 
My second note of the day is about the effectiveness of fiscal spending as 'get-us-out-of-recession' stimulus. Given that the Government is now pre-committing itself to not cutting public sector pay, it is worth quickly mentioning that the Unions-supported idea that cutting public expenditure is only going to make our recession worse is simply untrue. A recent (July 2009) note by Fabrizio Perri of University of Minnesota, Federal Reserve Bank of Minneapolis titled "Comment on: Planning to cheat: EU fiscal policy in real time by Roel Beetsma, Massimo Giuliodori and Peter Wierts" provides an estimate of the fiscal expenditure multiplier for European economies. The number is 0.85... or, significantly less than 1. This suggests that cutting public spending will lead to a proportionately smaller reduction in GDP than the savings to be generated.

Here is an additional (excellent) note on the whole mess of fiscal multipliers. Adding to this, one has to recognise that Irish public spending is far less effective as a stimulus to the economy, as it is accounted for (to the tune of 70% of the total expenditure) by social welfare and wages - i.e. non-productive components. Thus, one can expect the above 0.85 multiplier estimated for Europe as a whole to be around 0.26-0.0.29. Which, in turn, means that any fiscal contraction in today's Ireland will likely result in a medium-term expansion of our economy. Then again, we already know this much from the 1980s experiences, don't we?

In reality, of course, taxing private economy amidst credit and asst price crises to continue wasting money on the current public expenditure is a sure way to extend and to deepen the recession, as:

Posted by TrueEconomics at 10:43 AM

Welcome back Constantin with your honest logical comment.
We are so used to our "leaders" lying to us now we don't expect anything except more lies.
One great strenght of numbers is that they can't be rounded like words can when you want to lie.
I crossed the new bridge on the Waterford bypass in the last week.It's a great example of what 500,000,000 euro represents.
Most people including myself find difficulty in what this 500M that we are borrowing every week represents.I think if people visit any 500M project near them it will really bring a clear picture into their mind of what our weekly borrowing really is.A housing estate with 2500 houses worth 200,000 each would equal our weekly borrowing also,or 100 people each winning a 5 MILLION euro lotto jackpot would equal one weeks borrowing.
In five hundred years time they will no longer be telling the story about the emporer having no clothes.They will be telling the true story of how good Bertie was at telling lies to a whole nation for years and years.
And they all lived happily ever after!!!!

Good Post Constantin - I'm becoming more and more concerned with the apparent back tracking on the public pay cuts - particulary after a period of time where (at least to me) it seemed that there was a growing acceptance that the pay would need to be cut and it was only a question of by how much.

On the first part - I wonder if the open-ness of our economy and the FDI impact will speed our recovery up a bit more than would have been the case in the sample countries used by the researchers? We are not unique but we are quite different in terms of the level of employment and income generated by virtue of non domestic economic activity and as such the external factors can have a significant impact.

"In reality, of course, taxing private economy amidst credit and asst price crises to continue wasting money on the current public expenditure is a sure way to extend and to deepen the recession"

I could agree that taxing the private economy (particularly) in a recession is not a good idea.

But has not the "private ecomonomy" become the protection of the wealth of a global "class" who care not for "Ireland" or any other "land".

I think ALL economists are missing the real truth about the free flow of capital and the destruction of the nation state.

The real truth is that "Ireland" doesn't matter. No nation state matters.

The "old" economics is dead.

This is a mercantalist globe.

There is no law of economics.

There is no law.

All you have to do to take €54bn of money from the Irish State is set up a "Special Purpose Vehicle".