Scroll for IKEA Effect discussion and Retail Sales Data below...

A superb note on the current markets from Robert Lenzner on the links between the Bull run we are experiencing and economic fundamentals is available from Forbes (here). To sum it up: that which can't go on usually doesn't.

What are the implications for Ireland?
Can you see Bank of Ireland or AIB shares trading at Euro4.00-5.00 range with these prospects? I don't...


Ikea Effect: I wrote before on many occasions about the WalMart effect: give consumers better value for money (through more efficient purchasing, logistics, distribution, marketing and retailing) and they will vote for you in tens of thousands. Now we have a small glimpse at it in the form of IKEA.

Here it is - in this week's CSO data on retail sales: August retail sales down a massive 1.0% overall, after six months of shallow increases. Worse than that - core retail sales (ex-motors) down 1.8% on July breaking three months improvements pattern. Food sales were down 2.8% despite decent weather and more families staying at home instead of leaving for a vacation. But, Furniture & Lighting was up 26% - thanks to IKEA. 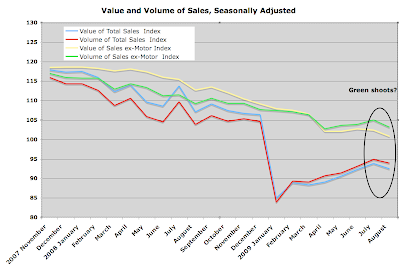 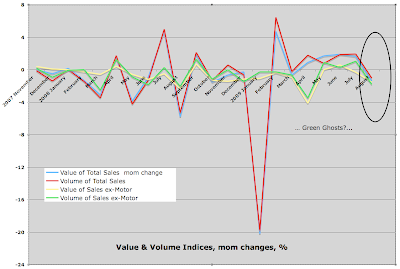 So broader trends are dire. But look at what's happening in Furniture Sector (IKEA Effect): 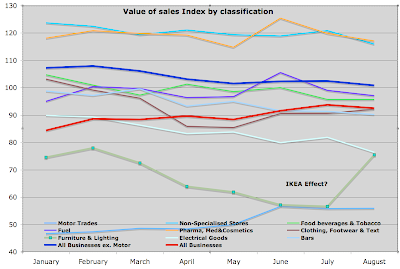 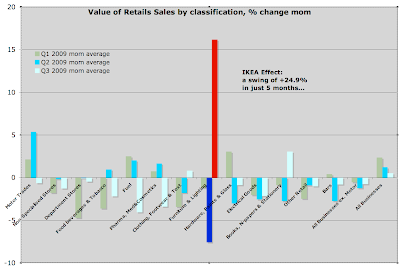 Now, per CSO CPI data: Furniture and Furnishings, plus Carpets & Floor Covering account for 1.0812% of total Household Expenditure in 2006, Household Textiles - for additional 0.2424%, Glassware, tableware & household utensils 0.2577%, so roughly 1.6% of household spending goes to items sold by IKEA. Per CSO data, 2008 personal consumption expenditure in Ireland was €93,863bn, so roughly speaking €1,500mln of this went to goods of the types sold by IKEA. If IKEA offers average savings on Irish-domestics in the sector of some 25-40% (and my own experience suggests it is actually greater than that, but let us be conservative), the savings potential due to IKEA Effect add up to some €375-600mln or some €133 per every person in this country.

Now, IKEA has been trying to get a store into Ireland since at least 2000, which implies that an average Irish household has lost up to €4,000 in savings that could have been achieved were the IKEA (or WalMart) effect present in this economy. All due to the corporatist and politicised nature of our planning and retail regulations. Some price to pay!

Of course, these savings would have been even greater as:
But let us not count 'small change' - after all, preserving a 'small town' character of retailing (with convenience shops littering every corner of our towns and gas-station shopping outside of Dublin instead of proper multiples retailing) is worth €4,000 per family. Isn't it?

A quick note on the WalMart effect in broader terms. Ireland is aiming to get its R&D spending (public and private) contribution up to 3% of GDP or in 2009 terms - roughly €5.1bn per annum. Now, assuming WalMart-type retail efficiencies can deliver a 10-15% savings on our retail spending, the gains from the WalMart effect will mean an addition to our GDP to the tune of €9-14bn per annum. Of these, some 30% will be accruing to the Exchequer in form of various taxes, so the second order increase in GDP will be €2.7-4.2bn. Total increase in GDP will, therefore exceed €11-18bn or 6.5-10.5% of GDP. (These are back of the envelope calculations, but you can see where it is going)...

Posted by TrueEconomics at 10:49 AM

It would seem to me that the question of saving $4k per household should we weighed against the the larger implications of low cost production. Sure, the small town/local business "charm" you dismiss so easily seems like a trite argument but the reality is that local businesses, jobs, and opportunities would be lost as well. Ikea and Wallmart are "efficient" in that for that volume they sell they employ only low skill workers, with low chances of advancement. Local businesses are owned by local entrepreneurs, run my local managers, and products are made by local craftsmen. So a recent high school grad who might go into the cabinetry trade and earn a significant salary, with union benefits, will instead be a cashier at IKEA, what difference is the $4K he saves on furniture when he (and the national economy) lost hundreds of thousands in lifetime earnings?

Other problems are also imminent, IKEA and Walmart raise the barrier to entry, thereby creating monopolies; like a monoculture they create weak and unsustainable dependencies. IKEA wants into the community because the residents have the money to buy their products. Once IKEA puts the local retailers out of business, locals won't have the jobs or money to buy IKEA products, IKEA will leave, and the town will be left with nothing, no local economy, no jobs, and empty real estate, dragging down property values.

Finally we must also ask ourselves if IKEA's low prices are really only a result of efficiency. I think if we are honest with our selves we have to admit that someone is being severly underpaid if you can buy a solid oak bed frame for $200, including materials, shipping, and retailing. That should be concern enough.

I appreciate your insight into the individual savings, but in my view they are greatly outweighed by the losses.