Here is an interesting illustration of how ineffective was (and is) FAS is addressing the issue of long-term unemployment. 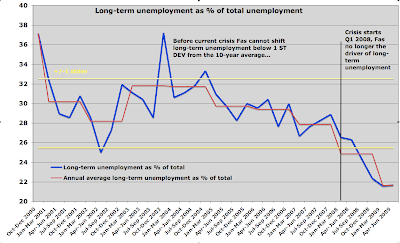 So there you go - reforming FAS must take radical forms!

Oh, and on personal note of response to Denis O'Brien's comment today about 99% of economists who did not predict this crisis and 1% who predicted it long before it happened:

Per Irish Economy blog: "RTE reports the following comments from billionaire businessman Denis O’Brien while speaking at a Dublin Chamber of Commerce: Mr O’Brien also said the country’s third level sector supported 250 academic economists whom he accused of ‘writing blogs, twittering and taking out ads to stop NAMA’. He said they generally made a nuisance of themselves - which would be fine if 99% of them had not failed to predict the economic meltdown facing the country. He said the other 1% predicted doom all the time. ‘I have a sense that all these economists need to come and work for real businesses to really understand how the economy works and see the actual stress and strain of running a business… only then will they have something to contribute,’ he said.

Point 1 for Mr O'Brien: I work for real businesses - both in this country and abroad. In fact, I also run my own business.

Point 2 for Mr O'Brien: last week I lectured Mon-Friday each day for 6 hours in TCD, Wed-Fri for additional 2 hours in UCD, and on Saturday - for 3 hours at TCD again. In between, apart from Twittering and blogging, I also wrote several press articles, worked on two research papers and had a number of business meetings. I also worked on a long-term private sector research project and advised my clients in the US.

Point 3 for Mr O'Brien: in 2004-2007 I warned repeatedly that Ireland is facing a crisis in public spending, housing markets and private sectors debt. I did so from various platforms, including his own Newstalk106 and TodayFM. In 2008 I was at the fore front of private sector economists who were pointing at the depth of developing crisis. I also made a point of always offering a potential solution to every problem I was able to identify. Not that I called everything right in my life, but Mr O'Brien's statement is a bit rich.

Point 4 for Mr O'Brien: it is precisely
that we are warning about the risks that Nama and other Government policies have.

Mr O'Brien might not see it this way - and it is his right to disagree - but throwing about silly statements in an attempt to ingratiate oneself with those in power is a strange position for a successful entrepreneur and businessman like Mr O'Brien.
Posted by TrueEconomics at 6:25 PM

This is a man who has benefitted in billions of euros through his interaction with politicians in 'service' to the State.

There exists a culture in Ireland now of murdering the truth or at least free speech.
This weekend Morgan kelly(I think thats the chap's name ) was verbally abused by a bank economist for his analysis of the property bubble and questioned his(Kelly's) right to state those views.

It must also be taken into consideration this man(denis o'brien) may soon own Independent newspapers,he owns newstalk a radio station and through the media he has been pre- empting the reports from the tribunals investigating the awarding of phone licences by the state by bad mouthing the process.

Maybe the concern should be over the propriety of this mans activities in areas where he attacks to destroy without evidence.