To continue with IMF’s World Outlook (from the earlier post here for GFSR and here for WO Part I):

Remember we left WO Part I on that table estimating expected future contraction in house prices. The table is:

Some interesting estimates of the ‘left to contract’ distance in house prices by countries and by measures of long-term equilibrium pricing, as of Q1 2009, taking into account the contractions achieved to date. As with the analysis of the last table, based on the historical averages Ireland has some room left for downgrades. Loads of room.

As we all know, Ireland is experiencing a perfect storm – a confluence of several simultaneous crises: housing bust, general property bust, general economic recession with global demand contractions, an unprecedented fiscal crisis and a financial sector meltdown. Clearly, these factors warrant much deeper contractions on the long-term adjustment path than what simple averages suggest. 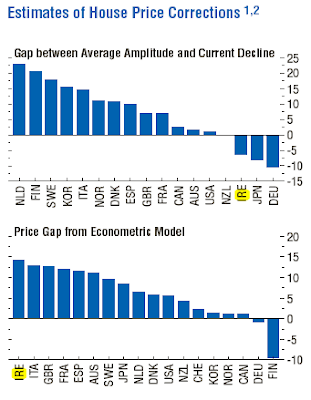 The second chart above shows that indeed, this might be the case – Ireland is distinguished as the country with the greatest remaining room for further downward adjustments in house prices than any other country in the sample. This reflects Ireland’s economic, assets markets and property markets fundamentals comparative to other countries in the sample. So 15% to go still? And that is assuming only property crash has happened…

Chart below actually confirms the above, once we realize that the income measure used by IMF is our GDP. Of course, we are familiar with the following tow facts:
Thus, adjusting the above figure for GDP/GNP gap implies that instead of roughly 0.2 forward expected adjustment expressed in GDP terms as the income base, we are facing a 0.24 level of adjustment. Furthermore, given that Ireland is currently experiencing deeper income collapse than any of the charted peers, plus, given substantial declines in after-tax income following Budgets 2009 and 2009.II, the real extent of the remaining room to compression for Price-to-Income ratios comparisons is of the magnitude closer to 0.3 – in line with all of our peers. 24-30% still to move down for Irish house prices then? 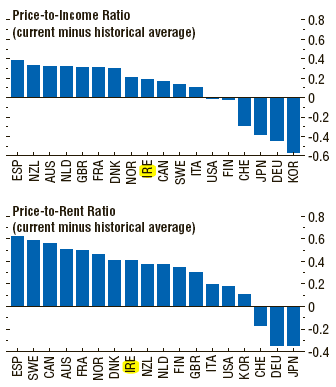 Lastly, the chart above once again reinforces the conclusions reached by IMF in the second chart above and by my own recalibration of the IMF’s duration-to-amplitude model in the table above. Price to rent ratio still has a room for some contraction of the magnitude of ca 40%. This, of course will be reached through further declines in prices relative to rents and this process is currently being delayed by rents falling off at a faster rate than asking prices in recent months. In rental yield terms, some 40% left to cover for Irish prices. Hmmm… me recalls some stockbrokers recently were saying yields are at 6-8% already and the crisis is nearly over…

Is that really a case? Not per IMF: 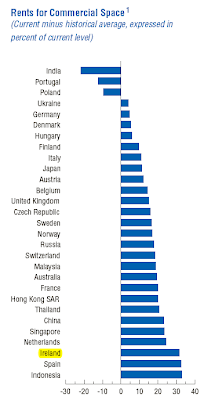 So IMF is saying that Irish commercial rents have much further to fall – 30 plus percent more! Say yields also compress – if not by more than that, but at least that much. Ronan Lyons estimated recently that commercial yields in Ireland are around 3% pa. Bringing these to historical average will require prices falling dramatically more from current levels – as chart above implies.

Good prospects for Nama, then, which is overpaying for underlying real assets at today’s prices, let alone at where IMF would expect the prices to be in equilibrium… Will it be -40% from current levels or -30%, or -20% - no one can know for sure. But then again, Nama is a bet on prices actually rising from current levels, not falling.
Posted by TrueEconomics at 6:16 PM