Another month, another set of Exchequer returns and another prediction of mine confirmed: Exchequer revenue is not stabilizing. A second wave of downgrades for Income Tax and VAT, as well as the adverse timing effects on Corpo Tax are now appearing.

This time around, the prediction was not only made on this blog (here), but was also elaborated in my Business & Finance magazine column. A combination of poor forecasting (overestimating the extent of seasonality on tax revenue in August, while underestimating the impact of seasonality on other months revenue) and of a naïve belief that things can’t get much worse from April 2009 Supplementary Budget position are now at play.

In other words, it now appears that summer months’ targets were seasonally adjusted in a simplistic linear fashion. August out-performance by actual returns looks like a DofF failure to see that in a recession more people will be taking forced ‘time-off’ in summer months and that this can boost, temporarily, spending. The DofF also dramatically underestimated the extent of forward payment of corporate taxes, which automatically means that they overestimated corporate revenue expected in the future months.

During the boom, underestimated revenue projections by DofF were routine. Nay, they were annual regularity, so much so that the Government came to depend on these ‘windfall revenues’ as a sweetener to various Social Partnership deals – a little annual bonus for cronies. This time, looking to September, the DofF folks grossly underestimated the extent of the recession impact on income and thus the direction of the income tax. Having stabilized and even improved (very slightly) through July on the back of new levies, Income Tax has since taken a dive again. The implicit assumption that ‘things always improve in September might hold at the times of a boom, when July and August mark mass exodus of consumers from Ireland, while September marks return of the school year and back-to-work spending rises. But it will not hold in a recession, where economic activity remains slow in September or even falls (due to falling tourism and recreational spending). 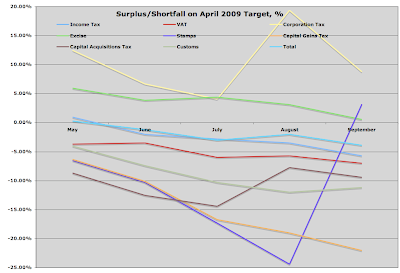 For some inexplicable reasons, DofF set targets for income tax to rise through September at a constant rate of roughly €1bn per month from May on. Given timing of self-employed filings and seasonalities in their incomes (with many taking unpaid ‘holidays’ during the summer), plus given the fact that the numbers of self-employed are rising due to redundancies and high unemployment, such an assumption of relatively static growth in Income Tax revenues is a bit amateurish.

The same factors have a knock on effect on VAT revenues. As income falls, consumption drops. As people get more leisure time, they tend to shop for cheaper goods and might take two trips up North instead of one. All point to the significant possibility that VAT receipts will be losing ground in summer months. Furthermore, the DofF forecasters also missed the effect of unemployment and falling incomes on parent’s willingness to spend vast fortunes of kids ‘back-to-school’ shopping. More importantly, what DofF clearly had no idea about is the psychology of ‘bundled shoppers’ – parents going to buy kids school-related items. If in Celtic Tiger days such a shopping outing was bound to end in a department store where parents can indulge in some compulsive shopping of their own, this year back-to-school shopping took them more likely to Aldi and Lidl, with only compulsive co-purchases taking place relating to the luxury items of, say, a box of chocolate biscuits. Not exactly an item where 21.5% tax rip off means much. 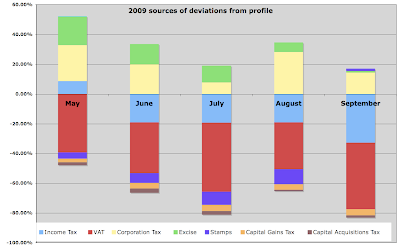 To be fair to DofF folks, they don’t really have much data to go to get an accurate model working. But to assume that July-September 2009 tax receipts will be directly proportionate (at a virtually constant rate) to those in 2008 is, at very best, naïve. Yet, per chart below, this was simply 'assumed'… 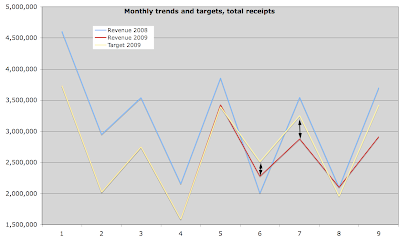 Now, September numbers confirmed more than just a shoddy quality of forecasting by the DofF (with an accumulated error for just 5 months-ahead forecast now standing at 3.91% we really do have a shoddy quality forecast here). Instead they show that all tax heads (apart from artificially inflated by timing changes) tax heads are tanking through 2009 relative to the already crisis-ridden 2008. Chart below and table illustrate: 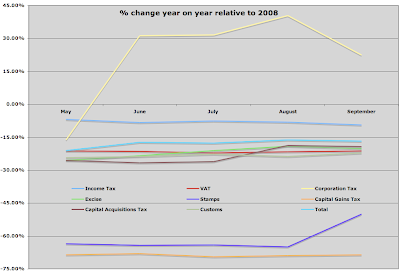 As far as state solvency goes, there is surprising one off change in our borrowings, which have apparently fallen back by some €5.2bn in September. I have no explanation for this, other than potential maturity of some earlier issued bonds or an error in reporting of the figures. Meanwhile the deficit trend continues to diverge from last years in the direction of further widening in fiscal deficit this year. Chart below illustrates. 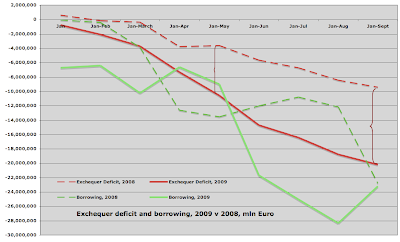 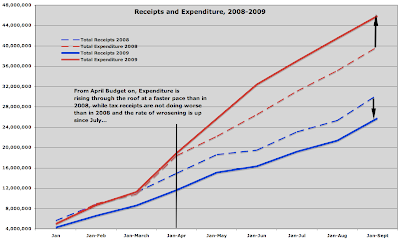 Income and expenditure gap is also still widening as the chart above shows. But there is something else that can be glimpsed from the data. Remember that in May 2009 this Government started a campaign to assure the markets and domestic taxpayers that their policies are working, that the worst is almost over and that the economy is in the state of having ‘bottomed out’. Chart below shows that even in the Government’s own back yard such statements were completely unjustified. Suppose that May did mark a month of arrested downward slide in this economy. One would expect at the very least that Government finances will not continue deteriorating at a greater rate than before April Budget. The path of fiscal deficit that is traced out by the black arrows in the chart below corresponds to exactly such an assumption. It is clear that we are not, currently, anywhere near the state of ‘improvement’ in the economy (as far as the Exchequer figures are concerned), or even the ‘bottoming out’ stage. We are still in a relative free-fall stage.

And this clarity is magnified by the expenditure side of the Exchequer balance sheet. Per Ulster Bank research note, the chart below shows the break down of the excessive spending by two main categories: 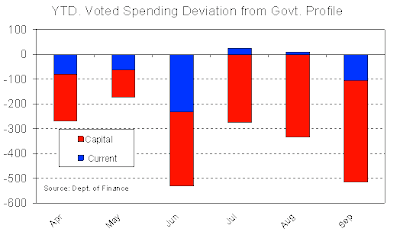 Minister Lenihan is more than willing to cut into Government's only official stimulus to the economy - capital spending. This is a right way forward as much of our capital 'investment' was, in reality, simply masked-up wasteful current expenditure on soft targets like 'training & education', 'social cohesion' etc. But the chart above shows that current spending cuts to date have been extremely shallow. This is not a policy consistent with the claims of rigorous addressing of the deficit - cyclical or structural. 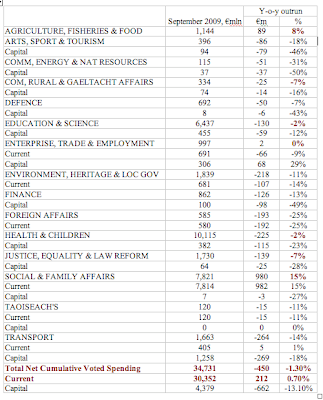 Table above clearly indicates the following facts about our Exchequer's spending side:
The verdict from all of this is a simple one - this Government is not doing enough to correct for structural and cyclical fall off in revenue. Tax increases and levies passed in October 2008 and April 2009 are not working. While cuts promised since July 2008 are not forthcoming. We are still on a path to state insolvency.
Posted by TrueEconomics at 1:20 PM