The S&P 500 Buyback Index Total Return data tracks the performance of the top 100 stocks with the highest buyback ratios in the S&P 500 in terms of total return. As the chart below shows, the Buyback Index has generally and significantly outperformed S&P500 returns since 2008: 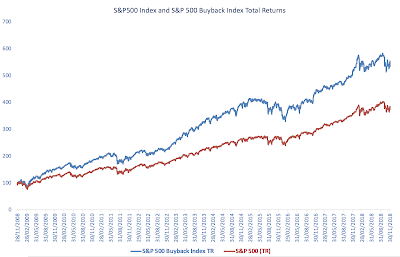 with three discernible periods of outperformance highlighted in the second chart: 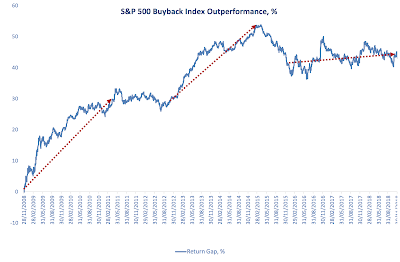 In simple terms, since December 2015, the Buyback Index Total Return performance relative to S&P500 returns has stagnated, despite accelerating buybacks by the S&P500 corporates. In part, this is driven by the increased buybacks activity in the less active companies (not constituents of the Buyback Index), but in part the data suggests that the returns to buybacks are generally tapering out.

At the same time, correlation between S&P500 returns and Buyback Index returns has been weakening from around the same time: 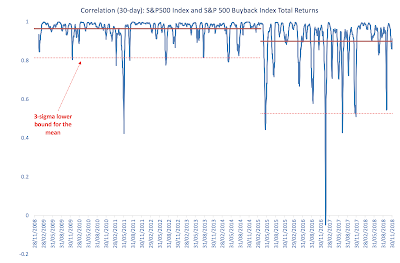 All of the above indicates a breakdown in the traditional post-2008 pattern of returns, as buybacks role as the drivers for improved ROE performance for top S&P500 shares re-purchasers is starting to run into diminishing returns.
Posted by TrueEconomics at 1:49 PM