5/12/18: Bitcoin: Sell-off is a structural break to the downside of the already negative trend


Bitcoin has suffered a significant drop off in terms of its value against the USD in November. Despite trading within USD6,400-6,500 range through mid-November, on thin volumes, BTC dropped to a low of USD3,685 by November 24, before entering the ‘dead cat bounce’ period since. The Bitcoin community, however, remains largely of the view that any downside to Bitcoin is a temporary, irrationally-motivated, phenomena (see the range of forward forecasts for the crypto here: http://trueeconomics.blogspot.com/2018/11/201118-bitcoins-steady-loss-of.html).

Dynamically, Bitcoin has been trading down, on a persistent. albeit volatile trend since January this year. Based on monthly ranges (min-max for daily open-close prices), the chart below shows conclusively that as of mid-November, BTCUSD has entered a new regime - consistent with a new low for the crypto. 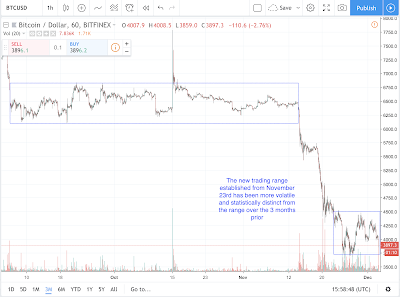 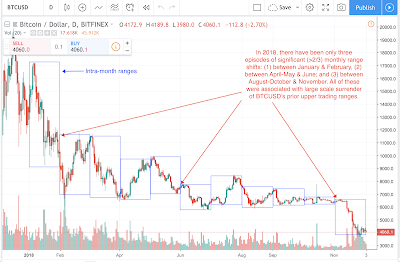 This regime switch is a relatively rare event in the last 11 months of trading, singling that the BTC lows are neither secure in the medium term, nor are likely to be replaced by an upward trend. While things are likely to remain volatile for BTCUSD, this volatility is unlikely to signal any reversal of the downward pressures on the crypto currency.

Consistent with this, we can think of two possible, albeit distinctly probable, scenarios:

Noting the above dynamics, the lack of any catalyst for the BTC upside, and the simple fact that since mid-November, larger volumes traded supported greater moves to the downside than to the upside, current trading range of USD3,900-4,100 is unlikely to last.

Scenario 2 supports going long BTC at prices around USD3,800, but it requires a major, highly unlikely and unforeseeable at this point in time, catalyst. A replay of the 2017 scenario needs a convincing story. Back then, in September-October 2017, a combination of the enthusiastic marketing of bitcoin as a 'solve all problems the world has ever known' technology, coupled with the novelty of the asset has triggered a massive influx of retail investors into the crypto markets. These investors are now utterly destroyed, financially and morally, having bought into BTC at prices >$4,000 and transaction costs of 20-25 percent (break-even prices of >$5,000). The supply of new suckers is now thin, as the newsflow has turned decidedly against cryptos, and price dynamics compound bear market analysis. Another factor that led BTC to a lightning fast rise in December 2017 was the promise of the 'inevitable' and 'scale-supported' arrival of institutional investors into the market. This not only failed to materialise over the duration of 2018, but we are now learning that the few institutional investors that made their forays into the markets have abandoned any plans for engaging in setting up trading and investment functions for their clients. In the end, today, the vast majority of the so-called  institutional investors are simply larger scale holders of BTC and other cryptos, unrelated to the traditional financial markets investment houses.

Scenario 1 implies you should cut your losses or book your gains, by selling BTC.

Posted by TrueEconomics at 2:01 AM