What unites Warren Buffett, Apple and the financially distressed generation of the Millennials? In one word: cash and preferences for safe haven assets. Consider three facts.

One: at the start of August, Berkshire Hathaway Inc. gave Buffett more room to engage in stock buybacks, just as company cash holdings rose to USD111 billion at the end of 2Q 2018, marking the second highest quarterly cash reserves in history of the firm. This comes on foot of Buffett's recent statements that current stock markets valuations price Berkshire out of "virtually all deals", just as the company took its holdings of Apple stock from USD40.7 billion in 1Q 2018 filings to USD47.2 billion in 2Q filings. Historically, Berkshire and Buffett are known for their high risk, nearly contrarian, but fundamentals-anchored investments: a strategy for selecting companies that offer long term value and growth potential and going long big. Today, Buffett simply can’t find enough such companies in the markets. His call is to return earnings to shareholders instead of investing them in buying more shares.

Two: on August 2nd, Apple became the first private company in history to top USD1 trillion market valuation mark when company stock closed at above USD207.05 per share. Company's path to this achievement was based on far more than just a portfolio of great products. In fact, two key financial engineering factors in recent years have contributed to its phenomenal success: aggressive tax optimisation, and extremely active shares buybacks programme. In May 2018, the company pledged USD100 billion of its USD285 billion cash stash (accumulated primarily off-shore, in low tax jurisdictions such as Ireland, Jersey and in the Caribbean) for shares buybacks. As of end of July, it was already half way to that target. Apple is an industry leader in buybacks, accounting for close to 15 percent of all shares buybacks planned for 2018. But Apple is not alone. A study by the Roosevelt Institute released in August shows that U.S.-listed companies spent 60 percent of their net profits on stock buybacks between 2015-2017. And on foot of the USD1.5 trillion tax cuts bill passed by Congress in December 2017, buybacks are expected to top USD 800 billion this year alone, beating the previous historical record of USD 587 billion set in 2007. Whichever way you take the arguments, accumulation of tax optimisation-linked cash reserves, and aggressive use of shares buybacks have contributed significantly to the FAANGS (Facebook (FB), Amazon (AMZN), Apple (AAPL), Netflix (NFLX), and Alphabet (GOOG)) dominance over the global financial markets.

And this brings us to the third fact: the lure of cash in today's world of retail investment. If cash is where Warren Buffetts and Apples of the financial and corporate worlds are, it is quite rational that cash is where the new generation of retail investors will be. Per Bankrate.com July 2018 survey data, 1 in 3 American Millennials are favouring cash instruments (e.g. savings accounts and certificates of deposit) for investing their longer-term savings. In comparison, only 21 percent of Generation X investors who prefer cash instruments, and 16 percent for the Baby Boomers. American retail investors are predominantly focused on low-yielding, higher safety investment allocations. For example, recent surveys indicate that only 18 percent of all American investment portfolios earn non-negative real returns on their savings, and that these households are dominated by the Baby Boomers generation and the top 10 percent of earners. Amongst the Millennials, the percentage is even lower at 7.4 percent.

The conventional wisdom suggests that the reasons why Millennials are so keen on holding their investments in highly secure assets is the fear of market crashes inherited by their generation from witnessing the Global Financial Crisis. But the conventional wisdom is false, and this falsehood is too dangerous to ignore for all investors - small and large alike.

In reality, the Millennials scepticism about the risk-adjusted returns promised by the traditional asset classes - equities and bonds - is not misplaced, and dovetails neatly with what both the largest American corporates and the biggest global investors are doing. Namely, they are pivoting away from yield-focused investments, and toward safe havens. The reason we are not seeing this pivot reflected in depressed asset prices, yet is because there is a growing gap between strategic positioning of the Wall Street trading houses (all-in risky assets) and those investors who are, like Buffett, focusing on longer-term investment returns.

In simple terms, the U.S. asset markets are grossly overvalued in terms of both current pricing (including short term forward projections), and longer term valuations (over 5 years duration).

The former is not difficult to illustrate. As recent markets research shows, all of the eight major market valuations ratios are signalling some extent of excessive optimism: the current S&P500 ratio to historical average, household equity allocation ratio, price/sales ratio, price/book value ratio, Tobin's Q ratio, the so-called Buffett Indicator or the total market cap of all U.S. stocks relative to the U.S. GDP, the dividend yield, the CAPE ratio and the unadjusted P/E ratio. Take Buffett's Indicator: normally, the markets are rationally bullish when the indicator is in the 70-80 percent range, and investors pivot away from equities, when the indicator hits 100 percent. Today, the indicator is close to 140 percent - a historical record.

But the longer run valuations are harder to pin down using markets-linked indices, because no one has a crystal ball as to where the markets and the listed companies might be in years to come. Which means that any analyst worth their salt should look at the macro-drivers for signals as to the future markets pressure points and upside opportunities.

Here, there are worrying signs.

In the last three decades, bankruptcy rates for older households have increased almost three-fold, according to the recent study, from the Consumer Bankruptcy Project (https://papers.ssrn.com/sol3/papers.cfm?abstract_id=3226574). This suggests that not all is well amongst the wealthiest retired generation, the Baby Boomers, who are currently holding the vastly disproportionate share of all risky assets in the economy. For example, 80 percent of Baby Boomers own property, accounting for roughly 65 percent of the overall housing markets available assets. All in, Baby Boomers have over 50.2 percent share of net household wealth. As they age, and as their healthcare costs rise, they will be divesting out of these assets at an increasing rate. This effect is expected to lead to a 3-3.5 percent reduction in the expected nominal returns to the pensions funds for the Generation X and the Millennials, per 2016 study by the U.S. Federal Reserve (https://www.federalreserve.gov/econresdata/feds/2016/files/2016080pap.pdf). The latter is, in part, the legacy of the 2007 Global Financial Crisis, which has resulted in an unprecedented collapse in wealth held by the American middle classes. Based on the report from the Minneapolis Federal Reserve (https://www.minneapolisfed.org/publications/the-region/race-and-the-race-between-stocks-and-homes), current household wealth for the bottom 50 percent of U.S. households is at the lowest levels since the mid-1950s, while household wealth of the middle 40 percent of the U.S. households is comparable to where it was in 2001. In other words, nine out of ten U.S. households have not seen any growth in their wealth for at least 18 years now.

Over the same period of time, wages and incomes of those currently in middle and early stages of their careers, aka the Generation X and the Millennials, have stagnated, while their career prospects for the near future remain severely depressed by the longer in-the-job tenures of the previous generations.

June 2018 paper from the Opportunity and Inclusive Growth Institute, titled “Income and Wealth Inequality in America, 1949-2016” (https://www.minneapolisfed.org/institute/working-papers-institute/iwp9.pdf) documented the dramatic reallocation of purchasing power in the U.S. income across generations, from 1970 to 2015, with the share of total income earned by the bottom 50 percent dropping from 21.6 percent to 14.5 percent, while the top 10 percent share climbed from 30.7 percent to 47.6 percent. Share of wealth held in housing assets for the top 1 percent of earners currently stands at around 8.7 percent, with the remained held in financial assets and cash. For top 20 percent of income distribution, the numbers are more even at 28 percent of wealth in housing. Middle class distribution of wealth is completely reversed, with 62.5 percent held in the form of housing.

The problem is made worse by the fact that following the financial crash of 2007-2008, the U.S. Government failed to provide any meaningful support to struggling homeowners, focusing, just as European authorities did, on repairing the banks instead of households.

What all of this means for the asset values going forward is that demographically, the economy is divided into the older and wealthier generation that is starting to aggressively consume their wealth, looking to sell their financial assets and leverage their housing stocks, and those who cannot afford to purchase these assets, facing lower incomes and no tradable equity. This is hardly a prescription for the bull markets in the long run.

In this environment, on a 5-10 years time horizon, holding cash and money markets instruments makes a lot more sense not because these instruments offer significant current returns, but because the expected upcoming asset price deflation will make cash and safe haven assets the new market king.

The same is apparent in the corporate decisions to use tax and regulatory changes to beef up their cash holdings and equity prices, as opposed to investing in new growth activities. Even inclusive of buybacks, and Mergers & Acquisitions in the corporate sector, aggregate investment as a share of GDP continues to slide decade after decade, as highlighted in the chart below. 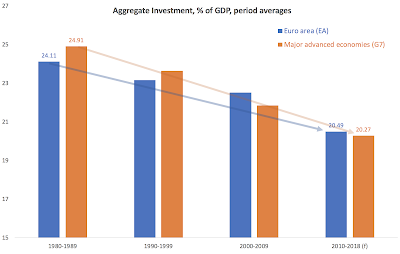 What makes matters even worse is that until mid-2000s, the data for investment did not include R&D activities, normally classed as expenditure in years prior. Adjusting for M&As, buybacks and R&D allocations, aggregate investment in G7 economies has declined from 24.9 percent of GDP in the 1980s to around 16-17 percent in 2010-2018. In simple terms, neither the public nor the private sector in the largest advanced economies in the world are planning for investment-driven growth in the near future, out into 2025.

None of which should come as a surprise to those following my writings in recent years, including in these pages. Over the years, I have written extensively about the Twin Secular Stagnations Hypothesis - a proposition that the global economy has entered a structurally slower period of economic growth, driven by adverse demographics and shallower returns to technological innovation. What is new is that we are now witnessing the beginning of the demographics-driven investors' rotation out of risky assets and toward higher safety instruments. With time, this process is only likely to accelerate, leading to the structural reversal of the bull markets in risky assets and real estate.

Posted by TrueEconomics at 1:42 PM