19/12/18: From Goldilocks to Humpty-Dumpty Markets


As noted in the post above, I am covering the recent volatility and uncertainty in the financial markets for the Sunday Business Post : https://www.businesspost.ie/business/goldilocks-humpty-dumpty-markets-2018-433053. 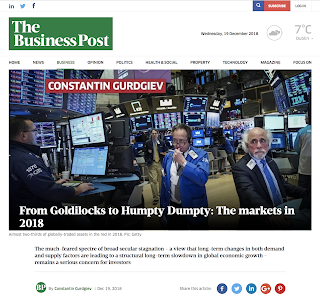 Below is the un-edited version of the article:

2018 has been a tough year for investors. Based on the data compiled by the Deutsche Bank AG research team, as of November 2018, 65.7 percent of all globally-traded assets were posting annual losses in gross (non-risk adjusted) terms. This marks 2018 as the third worst year on record since 1901, after 1920 (67.6 percent) and 1994 (67.2 percent), as Chart 1 below illustrates. Adjusting Deutsche Bank’s data for the last thirty days, by mid-December 2018, 66.3 percent of all assets traded in the markets are now in the red on the annual returns basis. 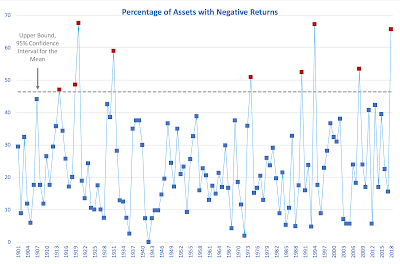 Source: Deutsche Bank AG
Note: The estimates are based on a varying number of assets, with 30 assets included in 1901, rising to 70 assets in 2018

Of the 24 major asset classes across the Advanced Economies and Emerging Markets, only three, the U.S. Treasury Bills (+19.5% YTD through November 15), the U.S. Leveraged Loans (+7.45%), and the U.S. Dollar (+0.78%) offer positive risk-adjusted returns, based on the data from Bloomberg. S&P 500 equities are effectively unchanged on 2017. Twenty other asset classes are in the red, as shown in the second chart below, victims of either negative gross returns, high degree of volatility in prices (high risk), or both. 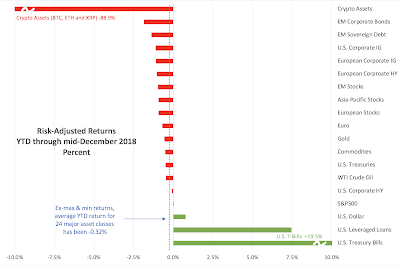 The causes of this abysmal performance are both structural and cyclical.

The cyclical side of the markets is easier to deal with. Here, concerns are that the U.S., European and global economies have entered the last leg of the current expansion cycle that the world economy has enjoyed since 2009 (the U.S. since 2010, and the Eurozone since 2014). Although the latest forecasts from the likes of the IMF and the World Bank indicate only a gradual slowdown in the economic activity across the world in 2019-2023, majority of the private sector analysts are expecting a U.S. recession in the first half of 2020, following a slowdown in growth in 2019. For the Euro area, many analysts are forecasting a recession as early as late-2019.

The key cyclical driver for these expectations is tightening of monetary policies that sustained the recovery post-Global Financial Crisis and the Great Recession. And the main forward-looking indicators for cyclical pressures to be watched by investors is the U.S. Treasury yield curve and the 10-year yield and the money velocity.

The yield curve is currently at a risk of inverting (a situation when the long-term interest rates fall below short-term interest rates). The 10-year yields are trading at below 3 percent marker – a sign of the financial markets losing optimism over the sustainability of the U.S. growth rates. Money velocity is falling across the Advanced Economies – a dynamic only partially accounted for by the more recent monetary policies. 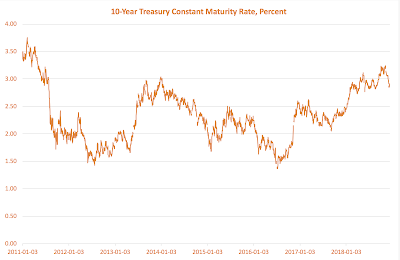 While cyclical pressures can be treated as priceable risks, investors’ concerns over structural problems in the global economy are harder to assess and hedge.

The key concerns so far have been the extreme uncertainty and ambiguity surrounding the impact of the U.S. Presidential Administration policies on trade, geopolitical risks, and fiscal expansionism. Compounding factor has been a broader rise in political opportunism and the accompanying decline in the liberal post-Cold War world order.

The U.S. Federal deficit have ballooned to USD780 billion in the fiscal 2018, the highest since 2012. It is now on schedule to exceed USD1 trillion this year. Across the Atlantic, since mid-2018, a new factor has been adding to growing global uncertainty: the structural weaknesses in the Euro area financial services sector (primarily in the German, Italian and French banking sectors), and the deterioration in fiscal positions in Italy (since Summer 2018) and France (following November-December events). The European Central Bank’s pivot toward unwinding excessively accommodating monetary policies of the recent past, signaled in Summer 2018, and re-confirmed in December, is adding volatility to structural worries amongst the investors.

Other long-term worries that are playing out in the investment markets relate to the ongoing investors’ unease about the nature of economic expansion during 2010-2018 period. As evident in longer term financial markets dynamics, the current growth cycle has been dominated by one driver: loose monetary policies of quantitative easing. This driver fuelled unprecedented bubbles across a range of financial assets, from real estate to equities, from corporate debt to Government bonds, as noted earlier.

However, the same driver also weakened corporate balance sheets in Europe and the U.S. As the result, key corporate risk metrics, such as the degree of total leverage, the cyclically-adjusted price to earnings ratios, and the ratio of credit growth to value added growth in the private economy have been flashing red for a good part of two decades. Not surprisingly, U.S. velocity of money has been on a continuous downward trend from 1998, with Eurozone velocity falling since 2007. Year on year monetary base in China, Euro Area, Japan and United States grew at 2.8 percent in October 2018, second lowest reading since January 2016, according to the data from Yardeni Research.

Meanwhile, monetary, fiscal and economic policies of the first two decades of this century have failed to support to the upside both the labour and technological capital productivity growth. In other words, the much-feared spectre of the broad secular stagnation (the hypothesis that long-term changes in both demand and supply factors are leading to a structural long-term slowdown in global economic growth) remains a serious concern for investors. The key leading indicator that investors should be watching with respect to this risk is the aggregate rate of investment growth in non-financial private sector, net of M&As and shares repurchases – the rate that virtually collapsed in post-2008 period and have not recovered to its 1990s levels since.

The second half of 2018 has been the antithesis to the so-called ‘Goldolocks markets’ of 2014-2017, when all investment asset classes across the Advanced Economies were rising in valuations. At the end of 3Q 2018, U.S. stock markets valuations relative to GDP have topped the levels previously seen only in 1929 and 2000. Since the start of October, however, we have entered a harmonised ‘Humpty-Dumpty market’, characterised by spiking volatility, rising uncertainty surrounding the key drivers of markets dynamics. Adding to this high degree of coupling across various asset classes, the recent developments in global markets suggest a more structural rebalancing in investors’ attitudes to risk that is likely to persist into 2019.