In recent months, Irish Consumer Confidence Index (officially known as Consumer Sentiment Index and prepared and published by the ESRI) has been re-establishing sufficiently strong positive correlation with retail sales data, which warrants its re-inclusion in my coverage of the Irish economy as a stand alone series to track.

Hence, this more in-depth than usual analysis of dynamics in the Consumer Sentiment data.

March 2015 reading for the headline Consumer Sentiment Index came in at 97.8 up on 96.1 in February, but still below 101.1 registered in January. January reading was the highest since February 2006 (109 months high) and March reading is the second highest reading since May 2006. So by all measures, consumer confidence is booming in Ireland.

March reading is almost on par with pre-crisis average (through December 2007) which stands at 99.2 and significantly above the average for the period from January 2012 through present (the recovery period) which stands at 71.8. Year on year, index is up 14.8 points.

These levels of sentiment are simply not consistent with the retail sales data, as I noted before, but are close to the longer-term trend and consistent with the recovery. In addition, volume of retail sales index is now co-trending with consumer Sentiment index as covered here: http://trueeconomics.blogspot.ie/2015/03/27315-irish-retail-sales-february-2015.html - a pattern that was established around July 2013. 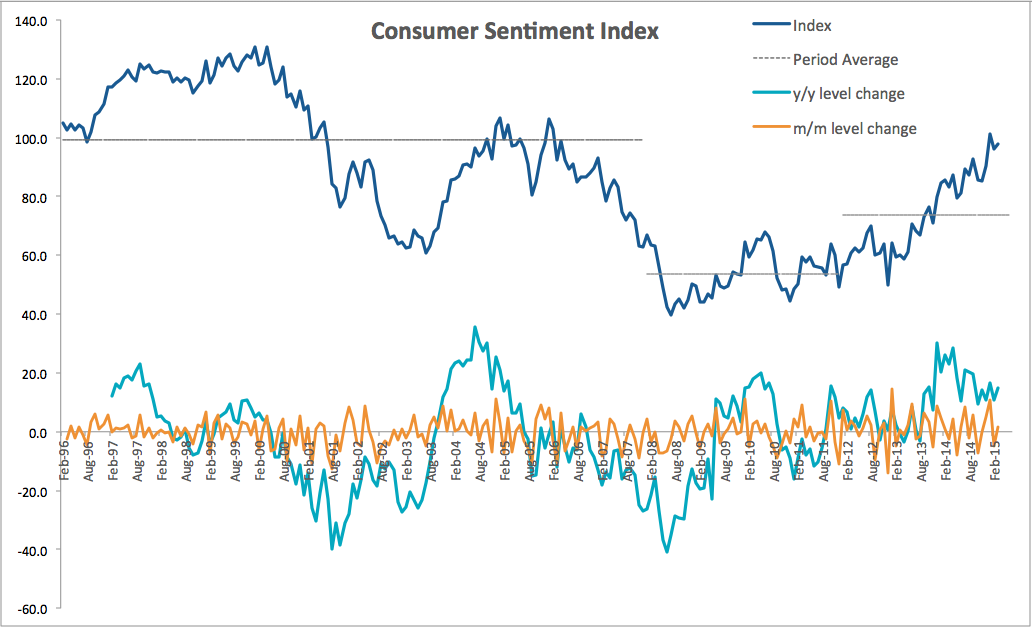 The elevated level of y/y rises in Consumer Sentiment Index, set on from December 2013 is a positive indicator of firming up volume activity in consumer demand, although not as strong of an indicator, yet, of the value of consumer demand. If the value of retail sales starts to catch up with consumer confidence, we are going to see significant boost to the domestic demand side of the National Accounts in later quarters of the year, pushing economic growth away from the questionable external trade stats and in favour of more domestic growth.


Index of Current Economic Conditions meanwhile, rose to 110.0 in March from 107.2 in February. This marks the second highest reading for the index since March 2006, with the highest reading recorded in January 2015 at 112.8. Again, index reads boom-time territory. It is only 16.8 points below all-time high and just 2.9 points behind post 2006 high. Current reading is up 19.6 points year on year - strong growth - strongest since April 2014. And index 3mo average though March is at 110.0 which is also the second highest 3mo average for the index from March 2006. 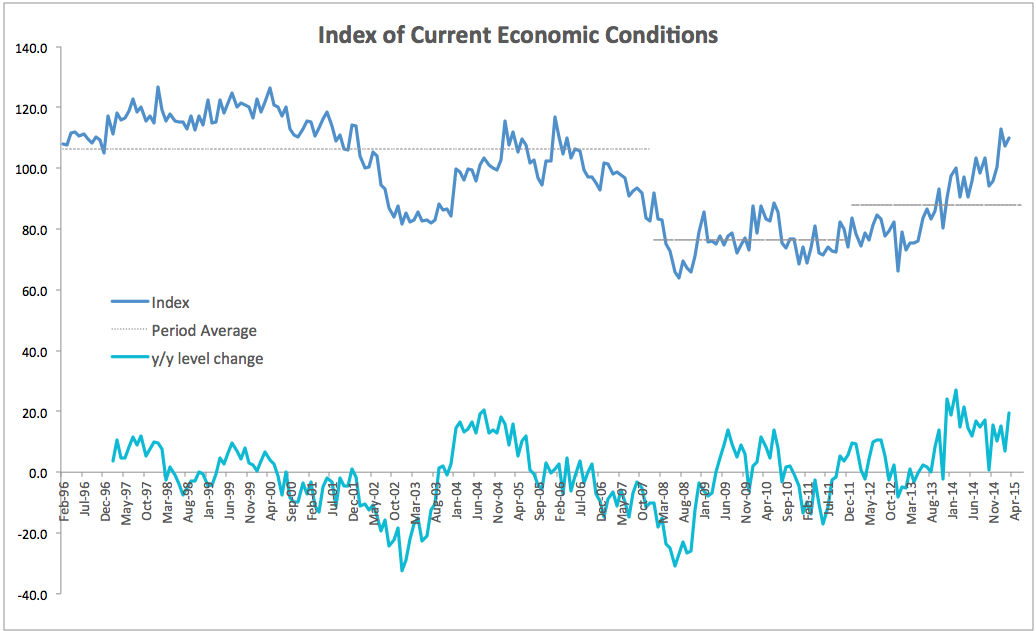 Again, the recovery is clearly visible in y/y growth rates starting from December 2013 and index readings are now above pre-crisis average.


Index of Consumer Expectations is showing more subdued increases, rising to 89.6 in March from 88.6 in February. However, as with other two indices, Consumer expectations currently sit at the second highest reading from May 2006, with the highest reading recorded in January 2015 at 93.2. Year on year index is up 11.5 - the slowest increase in 3 months and second slowest rise in 8 months. Still, 3mo average though March 2015 is now at the highest level for 3mo average series since March 2006. 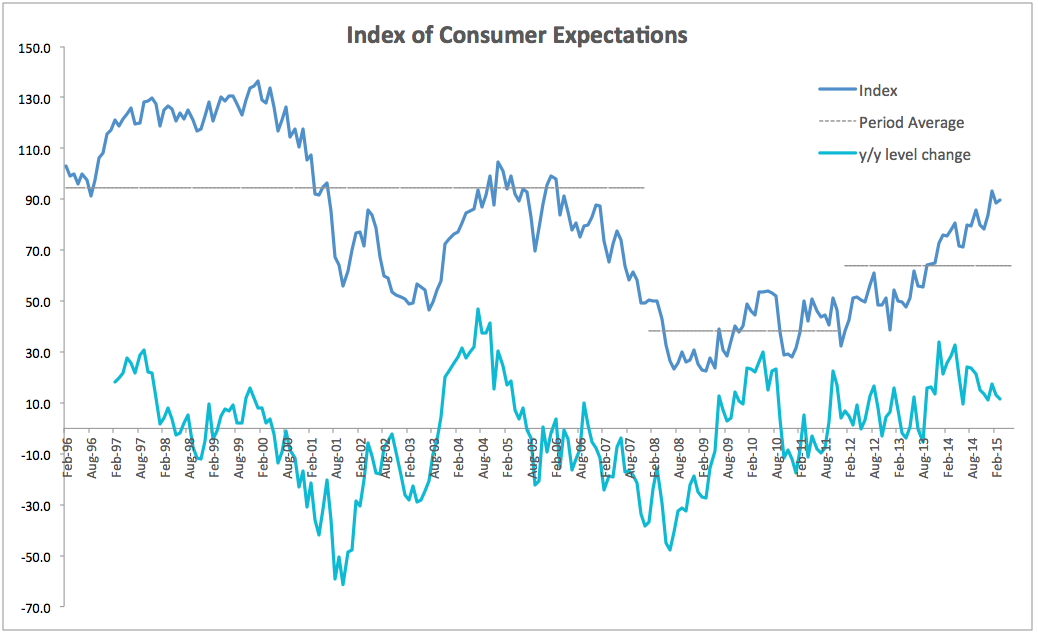 Consumer Expectations, for now, remain below pre-crisis average, but trending up strongly, with elevated y/y rises from December 2013. Slight issue is - per chart above, y/y increases, while remaining strong, are now trending down off Q3 2014 highs.


Overall, Consumer Confidence indicators discussed above suggest full reversion of consumer sentiment and expectations to pre-crisis conditions. Much of this will have to be tested in more normal inflation environment in the future and I am not sure this confidence will be sustained then (higher inflation is likely to cut back on consumer purchases and expectations, while associated higher interest rates are likely to severely impair demand).

In other words, stay tuned for more regular analysis of the series in the future.

Posted by TrueEconomics at 6:58 PM