Some interesting numbers on trade in goods for Ireland. As you know, I usually update these series on a quarterly basis - in part due to data volatility, in part due to lack of time. But there is something interesting afoot in the data, so here it is for the first two months of 2015 - subject to future verification of any trend.

These are bizarre and, frankly, unbelievable numbers. Last time we have seen this level of volatility in trade balance to the upside was in August 2012 (for one month only and then, nothing comparable to 41.1% y/y increase registered in December, 31.4% rise in January and 24.3% rise in February). 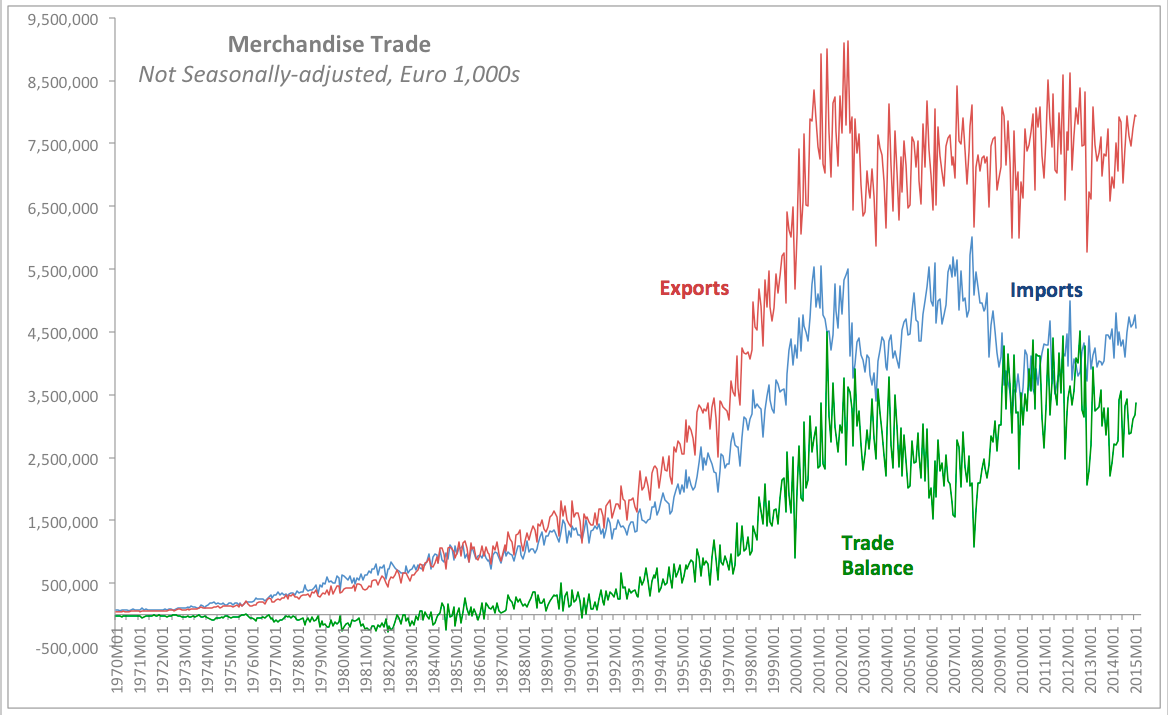 So something is brewing in the external trade stats. Last year, we had a runaway performance in the National Accounts-registered external trade numbers without having a corresponding rise in the customs reported figures, which was down to 'contract manufacturing' scheme (or whatever you want to call this accounting trick). This time around, either the said scheme is now also polluting our customs trade data or something new is afoot.

The 'new' bit appears to be the 'old' bit - look at the sources of growth in our trade: 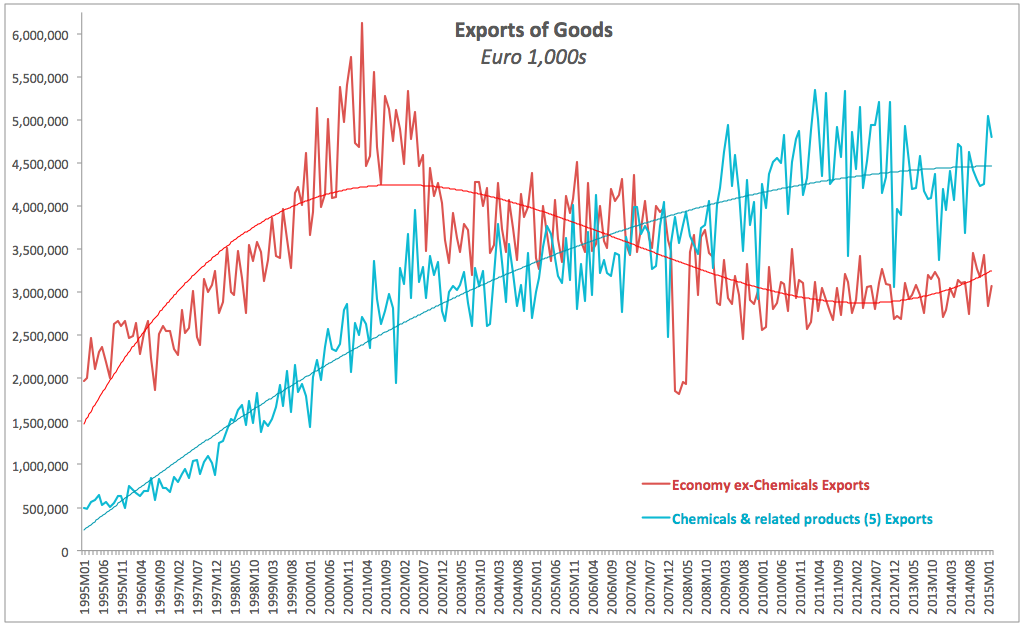 and in our trade balance: 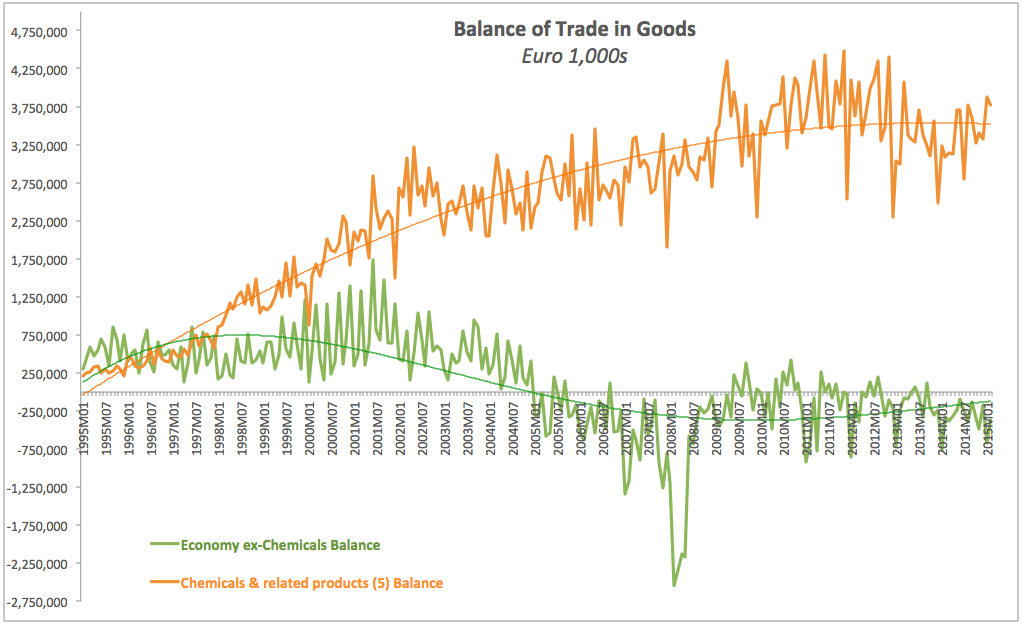 In simple terms, ex-Chemicals (pharma), our exports since the start of 2009. Pharma / Chemicals exports are up. Our trade balance in goods, ex-Chemicals is negative. That is right - negative (some 'exporting nation' we are) and pharma trade surplus is vast and on the rise again.

Let's take a slightly more detailed decomposition of movements in trade volumes, cumulated over the last 3 months (December 2014 - February 2015). What do we have? 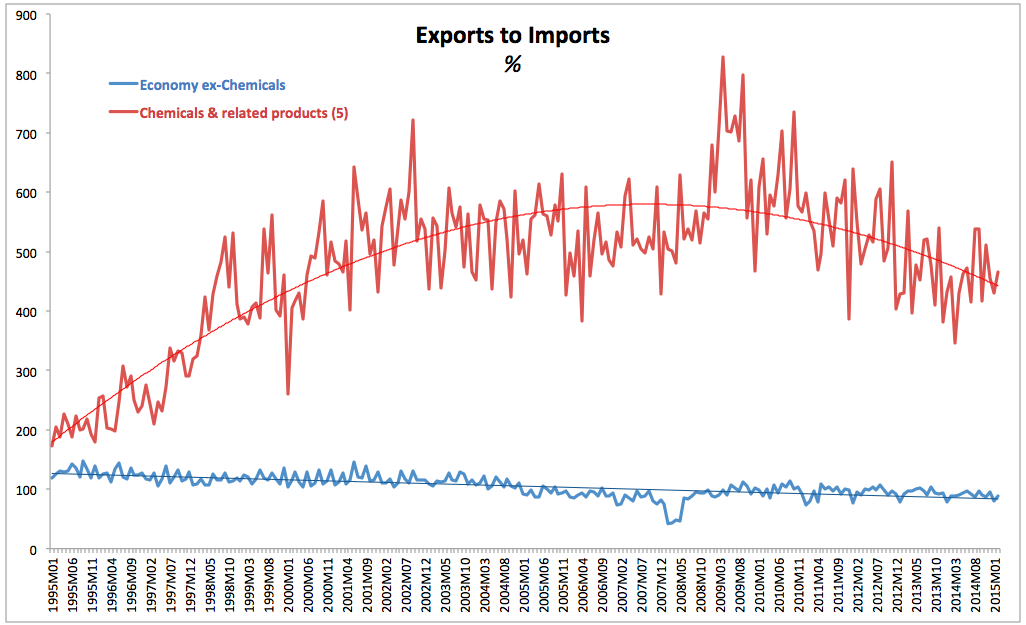 Incidentally, the above also explains the miracle of Irish productivity - the massive 'improvements' of which in recent years is nothing more than a pharma (and few other MNCs-dominated sectors, some not included in the goods data and polluting our services data instead) rebalancing into new tax optimisation schemes, post-patent ones.

Welcome to the land where sand castles are sold to visitors as 'de real ting' and pies in the skies are served for desert...
Posted by TrueEconomics at 4:21 PM