This is an unedited version of my current column in the Village magazine:


Ever since the October 2009 when the Greek Government finally faced up to the bond market pressures and admitted that its predecessor has falsified the national accounts, the euro area has been unable to shake off its sovereign debt crisis.

When the dust finally settled on revisions, the Greek debt to GDP ratio shot up from 98 percent at the start of 2009 to 133 percent of GDP in early 2010. Five years of subsequent Troika interventions, support programmes, enhanced agreements and debt restructurings underwritten the Greek debt to GDP ratio rise to 175 percent of GDP, the highest in the world for any country with a fixed exchange rate.

As The Economist wrote in April 2010, "Greece has become a symbol of government indebtedness. …It cannot grow out of trouble because of fiscal retrenchment and its lack of export prowess. It cannot devalue, because it is in the euro zone.” (Source: http://www.economist.com/node/16009099) The Economist went on to claim that despite these realities, Greeks “…seem unwilling to endure the cuts in wages and services needed to make the economy competitive.”


As we know now, the reality is far worse than that.

Contrary to The Economist (and the prevailing consensus across European elites and analysts), it was not the lack of the Greeks willingness "to endure the cuts in wages and services" that persistently and consistently undermined Athens' ability to reverse its economic fortunes.

On the economy side, macro figures tell the story that can also be narrated through social and personal experiences of the Troika-impoverished nation.

By all indicators, Greece has been dealing with the problems it faces, solidly in the Troika-prescribed direction.

Unemployment and collapse in economic activity are two core factors driving down Government revenues and pushing up social protection spending. In Greece, state revenues fell 10.6 percent between 2007 and 2014, less than in Ireland (down 12 percent). Following Troika orders, Greek government expenditure was down 18.8 percent by the end of 2014 compared to the end of 2007. Ireland's 'best-in-class' austerity performance shrunk public spending by only 0.7 percent over the same period of time.

The 'un-reforming Greeks' have, thus, endured a much sharper rebalancing of public spending (a swing between revenue and expenditure adjustments of over 15 percent) than Ireland (downward adjustment of 6.4 percent).


Is Competitiveness the Real Achilles’ Heel?

If internal devaluation were to be a measure of success, then Greece should be outstripping Ireland in terms of economic improvement. In reality it is severely lagging them.

The driving factor behind this outrun is not the current state of the Greek economy's competitiveness, but the legacy of pre-crisis debts accumulated by the country, plus the idiosyncratic nature of Greek and Irish crises and recovery paths.

Ireland came into 2008 with two economies running side-by-side: the domestic economy, dominated by the building and construction sector, rampant banks lending, asset bubble in property and unsustainable sources of funding for the Exchequer. This domestic side of the economy was contrasted and financially supported by the multinationals-led exporting economy based on decades-long tax arbitrage paraded in PR-speak as FDI. Collapse of the former economy was painful, but it helped sustain the latter economy, as the state avoided passing the pain onto the multinational sectors and dumped the entire economic adjustment burden onto households and domestic companies.

Greece had no such choice available. Its economy, when it comes to domestic firms, was marginally more competitive than the Irish one. But it had no MNCs-dominated tax arbitrage model on the exports side. Strikingly, pre-crisis, the index of unit labour costs – an imperfect, but still indicative metric of economic competitiveness –was signaling lower competitiveness in the Irish economy (including the MNCs) than in Greece. Since 2009, however, Greece deflated its labour costs by 26 percent more than double the 11 percent reduction achieved by Ireland.

So the immediate problem with Greece is not a lack of competitiveness or a deficit of conviction to cut back on unsustainable expenditures. Instead, the problem is exactly the same one that plagued the country at the time of its national accounts revisions in 2009, and at the moment of it signing the first Memorandum of Understanding with the Troika in May 2010, as well as in February 2012, when the second bailout was ratified by the funding states.

That problem is the level of debt carried by the country.

Troika disbursed to Greece, directly and indirectly, vast amounts of funds over 2011-2012: some EUR337 billion worth of various financial assistance, mostly in the form of new debt, but also via restructuring of privately-held Government bonds.

As one third of the funds disbursed in both bailout programmes was used to retire maturing debt, parts of the old debt got swapped for the new one. Interest payments on debt swallowed another 1/6th of the entire bailout. In total, payouts to the private sector bondholders, banks recapitalisations and debt swaps and interest payments used up 81 percent of the total lending to Greece.

Instead of funding debt redemptions and interest payments at par via new debt, the EU could have written off close to one third of Greek debt held by the official lenders on terms similar to those carried out in the private sector restructuring. The new restructured debt could have been held interest-free in long maturities within the Eurosystem and/or indexed to economic recovery performance.

As we know, the Troika did no such thing, continuing to insist, throughout 2013 and 2014 that Greek debts are sustainable, until latest political reshuffling in Athens brought about yet another iteration of the crisis. 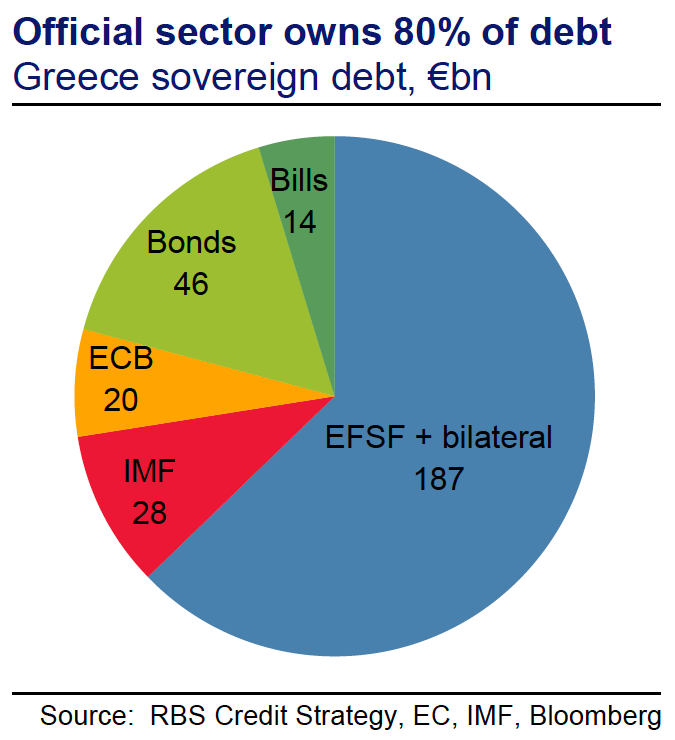 At the time of writing, Greece is facing an uncertain future.

In securing four months-long extension to the bailout in February, Athens had to sacrifice a number of core principles that served as the election platform for Syriza. The first victim was the idea of debt restructuring. Athens failed to ask for any debt writedowns in negotiating the extension. The second was the promise that the Government will not allow any extensions of the existent programme. Prior to the February agreement with the Eurogroup, Syriza planed for expanded public works programmes. These, along with other measures in the Syriza manifesto, were costed at EUR12-28 billion. February agreement puts Athens back onto pre-Syriza spending path. Syriza plans for using the funds left over from recapitalization of the banks to fund a fiscal stimulus programme have been effectively blown out of the water. And the dreaded Troika – the one that the new Government committed to abolishing – is still there, conveniently renamed ‘Institutions’. 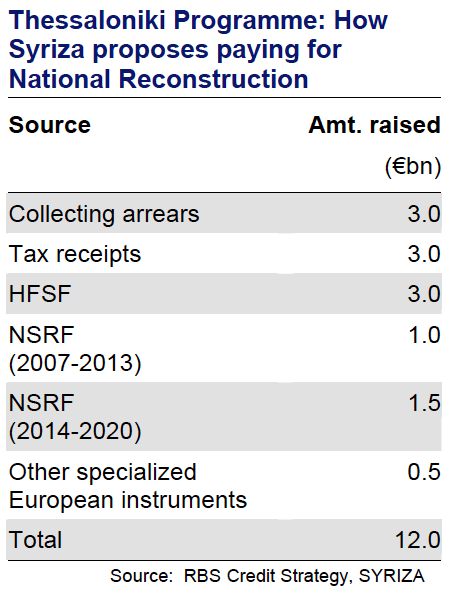 With this, Greece has a very weak hand in shaping the post-June agreement.

Firstly, the ECB and the IMF have both already stressed that any new agreement will require Athens adhering to the terms and conditions of the previous programme.

Secondly, both the ECB and the IMF are holding serious trump card: over H2 2015, IMF is due repayment of EUR4.2 billion of maturing debt and the Eurosystem is due EUR6.7 billion. There’s roughly EUR 2 billion more of short-term debt maturing in July on top of that. Needless to say, even with the funds held by the EFSF, Greece has not enough money to cover these maturities and coupons due – a problem only exacerbated by the fact that January-February 2015 tax collection was severely impaired by the political mess.

All of this makes Greece insolvent and explains why the Syriza made such a public turnaround in its negotiations with the Troika in February. But it also means that following February decisions, the Greek crisis is now moving into a new stage not that much different from all the previous stages. Risks of policy errors,  political instability and the high likelihood of further deterioration in the fiscal and economic performance on foot of these cannot be left out of the equation.

Neither debt, nor economic stagnation, nor social decline, nor democratic will of the sovereign people can derail Europe’s dogmatic insistence on the self-destructive shaped by the self-defeating European institutions. As a living embodiment of Jean-Claude Juncker’s formula for Europe that “There can be no democratic choice against the treaties,”  Greece is set to soldier on: from one crisis to the next.

Posted by TrueEconomics at 6:06 AM