A very interesting paper from the Asian Development Bank Institute on the topic of the middle income trap (see below) and the debate as to whether China can escape one.

In basic terms, when the economy starts at lower income levels, this usually involves increasing productivity in agriculture - often a dominant sector in a lower income economy - which frees surplus labour and makes it available to industrial activities and services. As manufacturing and industrialisation rise, the economy moves into middle income category.

When surplus labour from agriculture moves into manufacturing, its productivity is low, so naturally, the emerging middle income economies are focused on low wage, low productivity and low value-added manufacturing. As income rises toward middle-income levels, wages also rise. In order to continue growing, the economy requires either to increase quantity of inputs (capital and labour) - a pattern of development known as extensive margin, or it needs to increase quality of its economy activity, raise the value added by workers and capital used - a pattern of development known as the intensive margin.

The problem is that for an economy with relatively fixed (in the short run) workforce, attempting to continue growing on the extensive margin is simply impossible. Instead, the economy needs to switch - at some point - toward producing better quality and higher value-added output.

As the authors remind us, this "requires a shift in the types of products that it makes (shirts to computers), in the value or sophistication of those goods (low quality shoes to designer shoes), and/or in the value-added contribution to end products (electronics assembly to chip manufacturing)… These shifts require increases in the sophistication of technology, an educated workforce, and changes in work organization and motivation."


The authors thus investigate "the situation of middle-income economies around the world. Since 1965, only 18 economies with a population of more than 3 million and not dependent on oil exports have made the transition to being high income. Many more have not been able to move beyond the middle-income stage." In simple terms, the authors confirm existence of a significant middle income trap.

By testing "differences between two groups of economies across a range of growth and development variables", the authors find that "middle-income economies are particularly weak in the following areas: governance, infrastructure, savings and investment, inequality, and quality — but not quantity — of education." In other words, to shift from extensive margin growth to intensive margin growth you need serious institutional, communications and social capital.

With this in mind, the authors then turn to China. "While the size of its economy is large, the PRC is still a developing country with a modest per capita income. Only in the late 1990s did it graduate from low- to middle-income status. As it continues to expand, increasing attention is now focused on whether it will become a high-income country like several of its neighbors in Northeast Asia or, instead, whether it will suffer the fate of Latin America and
Southeast Asia by remaining at the middle-income level of development for decades."

Interestingly, the authors find that China "…already has many of the characteristics of a high income country, the key exceptions being governance and possibly inequality." The best way to look at the paper results relating to China is presented in Table 23, where the authors "developed a ranking system based on the medians" for all the drivers that were found to be significant in helping countries escape the middle income trap. "For each
variable, the economy received three points for being above the median, two points for
being below the median but above the median of the median, and one point for being
below the median of the median. The results were summed and divided by the number
of variables for which there were data for each economy."

The result is below (partial table) 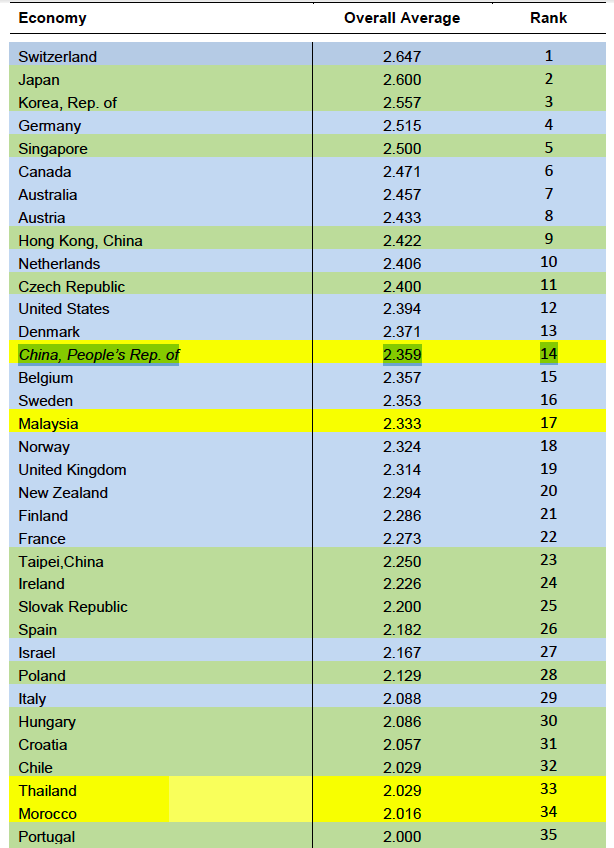 The core conclusion is that China does indeed appear to rank well in terms of key drivers necessary for escaping the middle income trap. Should it continue gaining in the near future in terms of all these factors at the same rate as it has been gaining in the past, China will join the club of the rich nations, not only because of the scale of its economy and population, but also because of the average or median per capita incomes.

Posted by TrueEconomics at 9:59 PM