Here's an interesting chart based on ECB data for lending rates charged on various types of loans: 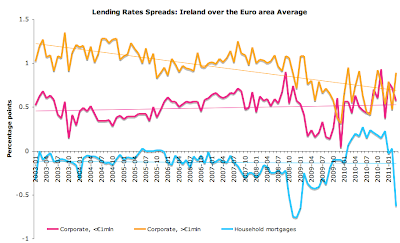 What does this hart tell us? Several interesting things:

Posted by TrueEconomics at 8:34 AM

ECB sits on a big steaming pile of PIIGS shit, and will turn out that ECB is overexposed to worthless bonds.

As a result, on May 25th, EU Parliament voted to accept Gold now as a collateral.....go figure!

(1) Wondering if higher value corporate loans were priced that way because the cost of facilitating and managing the transaction was lower per transaction? (i.e. it's cheaper to do a big deal than a bad deal);

(2) Was "Europe" treated as a single market, or were "averages" treated regionally (ie. Ireland treated as a statistically different grouping than France/ Belg, etc.);

(3) Was the Irish Retail debt subsidized (cross subsidised) by the Commercial sections of the banks?