Update: Namawinelake blog has an excellent post on the lunacy of Government treasury management exposed by the CBofI's latest accounts - read it here.


On April 7, 1775, Samuel Johnson made his famous pronouncement: "Patriotism is the last refuge of the scoundrel". This statement caught the chord with many other illustrious thinkers. Ambrose Bierce's The Devils Dictionary: “In Dr. Johnson’s famous dictionary patriotism is defined as the last resort of a scoundrel. ...I beg to submit that it is the first." In 1926, H. L. Mencken added that patriotism "...is the first, last, and middle range of fools.”

Whether one can separate a scoundrel from a fool or the first refuge from the last, in recent years we have seen Government officials who have exhibited all four attributes of false 'patriotism'.

No doubt, the decision by the Irish Minister for Finance to instruct NTMA to deposit €10.6 billion of state money with the Irish banks were not supposed to be amongst one of them. However, motivated by a 'patriotic' desire to provide a temporary support for the zombie institutions, artificially increasing their deposits base, this was a significant mistake from the risk management point of view.


Irish banks are experiencing a severe liquidity crisis, as the latest figures from the CBofI clearly show (Table A.2, column E). Lending to Euro area credit institutions has risen from 30 April 2010 levels of €81.25 billion to the peak of €136.44 billion by the end of October 2010 and now stands at a still hefty €106.13 billion (April 29, 2011), down €8.37 billion on the end of March. That's folks - our banks debts to the ECB. As far as banks debts to the CBofI itself are concerned, these have declined by some €12.64 billion to €54.15 billion March to April 2011. Chart below plots combined ECB and CBofI 'assets' that are loans to the Irish banks. 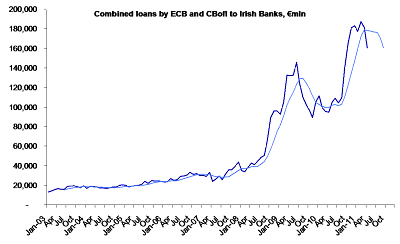 So the banks are still under immense pressure on the liquidity front.

As far as their solvency is concerned, BalckRock advisers estimated back in March 2011 the through-cycle expected losses in excess of €40 billion for just 4 out of 6 Irish 'banks'. Although these relate to 'potential' losses, the likelihood of these occurring is high enough for the CBofI to provision for €24 billion of these.

Either way, Irish banks are not really the counterparties that can be deemed safe.

There is an added component to this transaction - under the deposits guarantee, the Irish Exchequer holds simultaneously a liability (a Guarantee) and the asset (the deposit) when Mr Noonan approved the transaction. Before that, the Exchequer only had an asset. In effect, balance-sheet risk of this transaction was to reduce the risk-adjusted value of the asset it had.

Lastly, the entire undertaking smacks of the Minister directly interfering in the ordinary operations of NTMA which is supposed to be independent of exactly such interference.

So whether Minister's 'patriotism' of supporting Irish banks was the first or the last resort or the first and the last range, the outcome of his decision to prop up banks balance sheets with artificial short-term deposits was an example of a risky move that has cost NTMA its independence and reputation. The move achieved preciously little other than destroy risk-adjusted value of Government assets. Not exactly a winning combo...
Posted by TrueEconomics at 9:01 PM

Prof Bill Black nailed it in an interview with Mat Cooper
http://downwiththatsortot.blogspot.com/2011/05/matt-cooper-interviews-prof-william.html