An excellent blog post from the Zero hedge on the ECB's absolutely outrageous treatment of public disclosure rules when it comes to the Greek's Enronesque accounting fraud: here. Absolutely worth a read.

Now, on to the post. Eurocoin - leading indicator of economic activity for the Euro area - needs to be updated to reflect couple of months of my absence from the blog. So here it is: 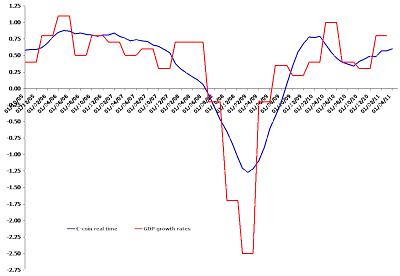 After couple of months of static activity, the Euro-coin is back on the rise in Q2 2011. This increase in the leading indicator, however, is driven primarily by external trade. Blistering exports performance is in turn driving expansions of manufacturing (industrial output) in Germany, France and now Spain, while Italy's industrial output remains largely stagnant.

Consumers are striking across the Euro area with retail sales for March coming in at -1.0% (-0.8% in EU27) month-on-month. This reverses 0.3% rise in retail sales volumes for Euro area recorded in February (+0.1% for EU27). Year-on-year retail sales fell 1.7% in March 2011 for the Euro area and 1.0% for EU27. Although EU economy has never been explicitly focused on the objective of internal markets improvements for the sake of consumer, these figures suggest that 'exports-only-led' recovery is coming in at the expense of the already weakened European households.

Here are two charts on the latest retail sales indices: 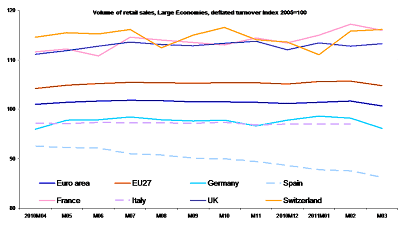 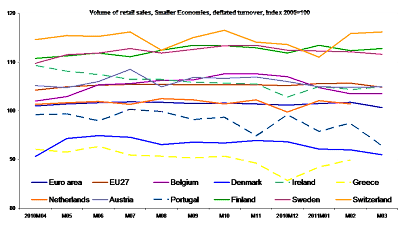