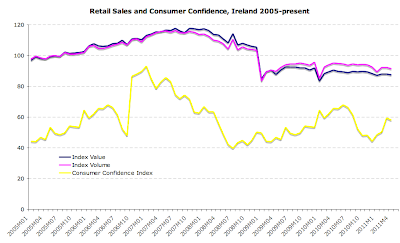 ESRI's Consumer Confidence index for April was down from 59.5 in March to 57.9. This decline was not marginal, but it does come at the end of three months of increases, so can be seen as at least in part a technical correction. Three month moving average continued to increase simply due to the momentum - a point that was missed by those observers who made much of hay out of this increase.

Contrary to the Sentiment momentum, of course, the Retail Sales fell in April:
Overall, it is believed that the 3mo MA is a better predictor of the general direction in the series. I am not so sure. Here's why. Both the contemporaneous (spot) indices and 3moMA are pretty much similar in tracking volume and value of retail sales. The charts below illustrate: 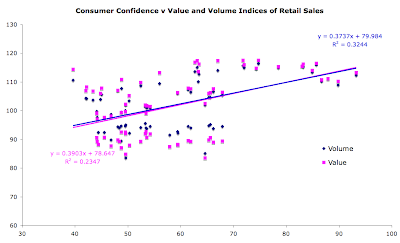 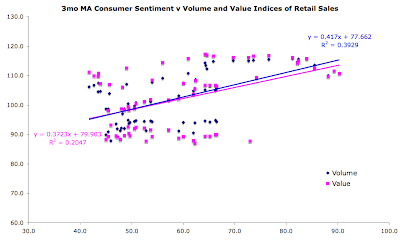 The 3moMA is somewhat better on both value and volume, but not by a massive margin.

Incidentally, the ESRI release on Consumer Sentiment index this month forgot (for some probably simple error reason) to update data tables from January 2011 through April 2011 (link here).
Posted by TrueEconomics at 9:33 PM

I love your blog - but on your graphs - please label your y-axes. I never know what units you're talking about.