Just run thought the figures for external trade (goods) for February 2011 and updated my files for bilateral trade with Russia and BRICs overall. Here are the core results: 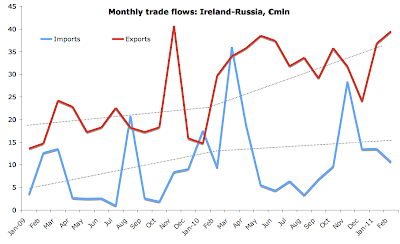 Bilateral trade with Russia is booming and the trade balance surplus is heading for historical highs, as I have predicted in a recent interviews with Rossijskaja Gazeta (here) and Voice of Russia (here). 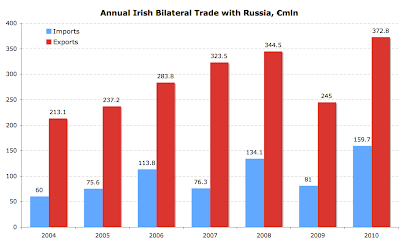 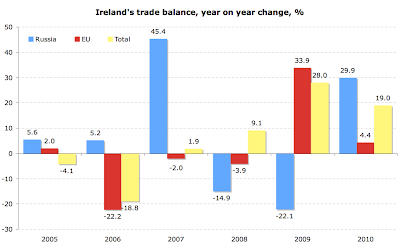 Note that Irish trade authorities have been stressing -as strategic objective - development of trade with the BRICs. In particular, China has been a major target for Irish trade promotion and development agencies, well ahead of Brazil, India and Russia. You'd expect China to be net importer of Irish goods for suhc attention to be paid to the country. Take a look: 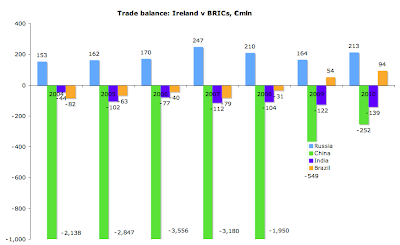 It turns out that our policy has been targeting the country that runs a massive trade surplus against Ireland. In other words, our imports from China are vastly in excess of our exports to China. In the mean time, Russia - which generates consistent trade surpluses for Ireland - is largely untouched by the Government agencies, when compared to China.

Here are the cumulative surpluses from our trade with Russia since 2004: 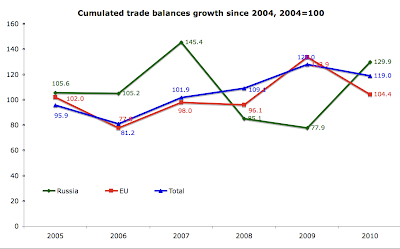 Posted by TrueEconomics at 11:16 PM

You might want to check out the Russia numbers a bit careful e.g. it was in the papers two weeks ago that Rosneft exported several billion dollars of oil from Ireland last year..

I wonder why would Rosneft (holder of huge own reserves and production well in excess of what Ireland consumes in its totality) export from Ireland several billion dollars of oil? Any specific reason? An unknown field somewhere in Co Meath the size of Saudi Arabia?

And where were those massive terminals used by Rosneft to load this oil? Or storage facilities to accumulate it?