Let's take a look at the dynamics of the Exchequer expenditure, building on the data released for November earlier this week. 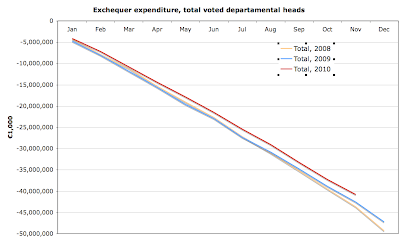 On total spending side, November 2010 posted improvement of €1.795 billion year on year or 4.22%, and €2.867 billion on November 2008, or 6.57%. Much of this came out of the capital investment cuts, but even putting this aside it is clear that adjustments on the spending side of Exchequer balance sheet have been too slow to reach the levels required (ca 20-25%).

Next, by separate departments. 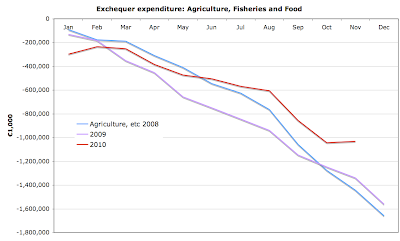 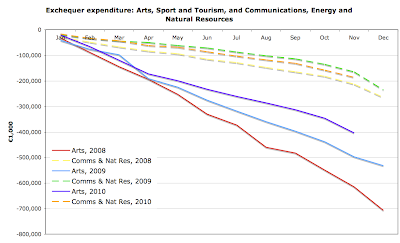 Chart above shows bizarre reality of our budgetary allocations. Arts, Sport and Tourism gobbled up some 2.2 times more resources than Communications, Energy and Natural Resources in November 2010. This was 2.67 times in 2008, and 2.26x in 2009. No one is to say that Arts, Sport and Tourism are not important, but does anyone feel we've got some priorities screwed up pretty solidly here? 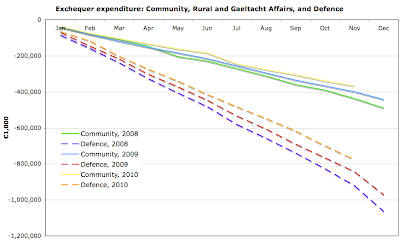 Community, Rural and Gaeltacht Affairs - with a budget 1.97 times (November 2010) greater than that of the Communications, Energy and Natural Resources has also been one of the core laggards in delivering savings. Presumably because it finances such vital economic activities as delivery of Irish language translations of the speeches of our Dear Leaders. Again, anyone seriously thinking that our priorities should be in spending double the amount we spend on communications, energy and natural resources on rural supports schemes and Gaeltacht subsidies? 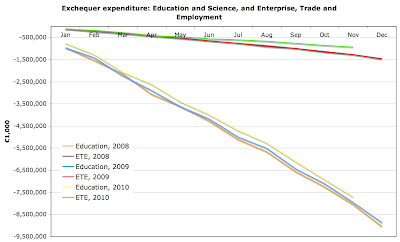 Just in case if you think we were already spending enough on preserving various arts, linguistic and other cultural values, here comes Environment, Heritage and Local Government (of course, I am being slightly sarcastic, as it also provides funding for Local Government): 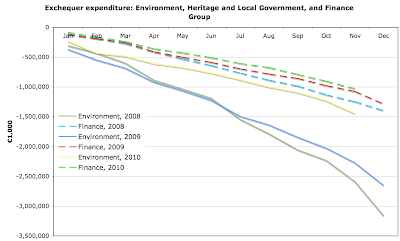 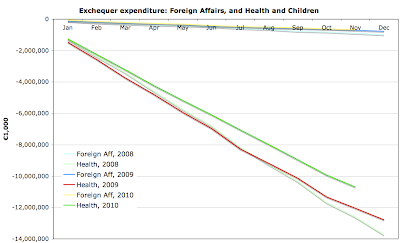 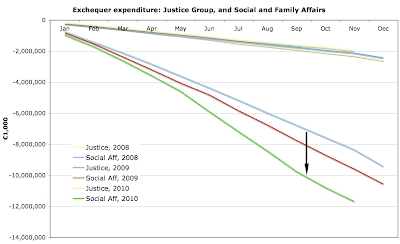 Like Finance, Taoiseach's Group is enjoying shallower cuts than other departments: 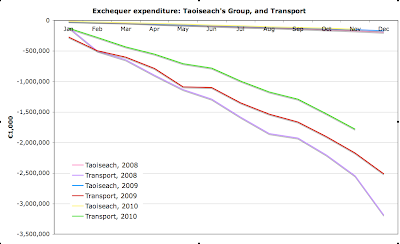 So far, Taoiseach's Group lost 17.8% of its 2008 level spending, while Transport lost 30.1%. In part, this reflects differences in the size of capital budgets for two departments, but in part it also represents the skewed priorities of this Government when it comes to cutting current spending, especially within core civil service numbers.

Table below summarizes these results of annual comparisons: 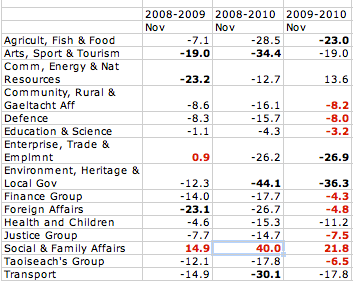 Next, lets plot levels and percentages of reductions in total expenditures, year on year: 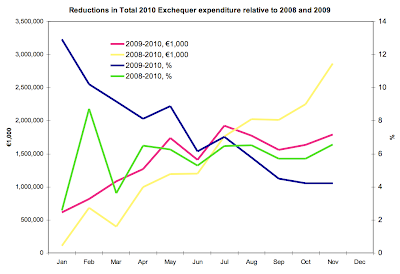 Notice the decline in 2009-2010 savings in relative terms over the course of the year. This can be explained in part by the often mentioned, but never confirmed, delays in payments by the Government to suppliers and a lag in capital expenditure.

Chart below summarizes the 2008-2010 changes in spending by quarter (with 4th quarter reflected as to-date figures through November): 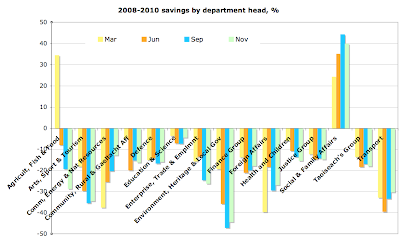 Now, for the last bit - the deficit: 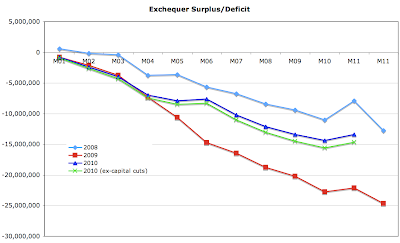 Notice that the above is not including banks measures in 2010, but does include bank measures in 2009, which of course, obscures the true extent of our savings. But that is a matter for another post.
Posted by TrueEconomics at 6:59 PM