The mixed bag - aka Irish economy - story of the Live Register from yesterday is continuing into today. The Exchequer results for November are being heralded by many 'official' analysts as a sign of significant improvement in the economy.

Are they? Really? Let's update my charts on the matter.

I guess I am just not buying the story of 'close to target' being a net positive signal for the economy. It might be a net positive for the DofF - who's forecasts are now accurate (after 3 years worth of trying). But for the rest of this economy, things are worse today - as tax revenues go - than they were a year ago. 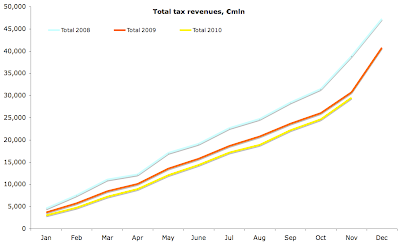 Now, November is the month when tax receipts accelerate dramatically. Good news, this year was no worse in the rate of increase than last, even a little better. Bad news, acceleration from October to November has been slower in this year than in 2008. Glass is half full on dynamics.

For 11 months of 2010, all tax heads, except for income tax are on target or ahead of target. Again - good news for DofF forecasters, but not great news for the economy. 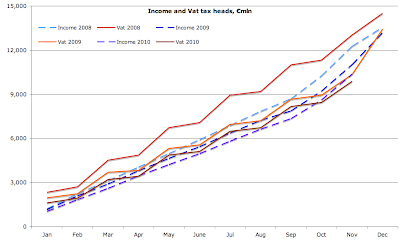 You can see how both income tax and VAT are performing poorer in 2010 than in 2009 and 2008. I'll summarize all these differences in a table below. But for now - all other tax heads in charts: 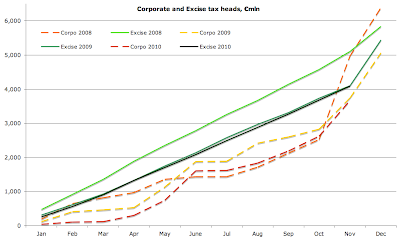 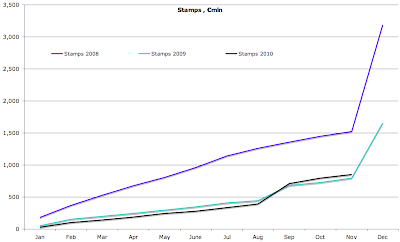 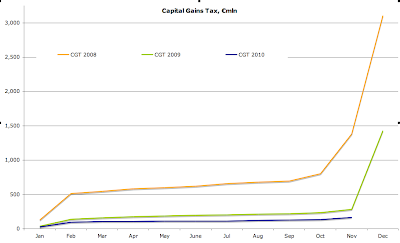 CGT... oh, what the hell - you can see, the story is the same as for all other tax heads save for stamps and customs. 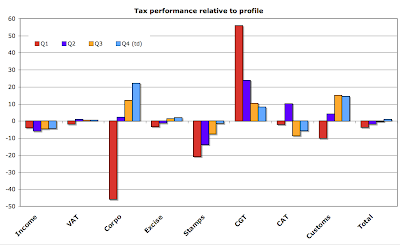 Charted over the year above. 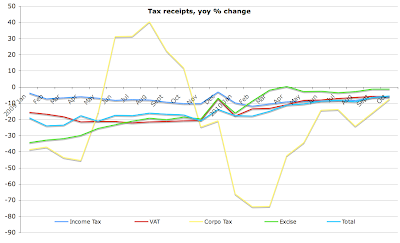 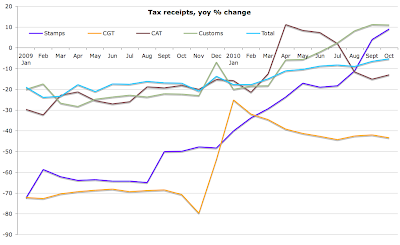 As noted before: with exception for two, by now pretty minor tax heads, accounting for just 2.9% of total tax revenue (Stamps) and 0.7% (Customs) of total tax revenue, everything else is performing worse this year than in 2009. I guess the only good news is that they eprforming not as badly as they could have were the things to completely collapse. Some solace then.
Posted by TrueEconomics at 7:04 PM

I largely agree but
- it is good news that the forecasts are getting better, because part of the problem is that DoF gets its numbers wrong all the time
- tax receipts above forecast means borrowing below forecast

It's pretty grim alright. However if we look at the monthly figures tax revenue for each of the past three months has been ahead of the 2009 equivalents. See here.

Since then things have stabilised considerably and in the last three months tax revenue is actually 6.0% up on the 2009 figure. Granted most of this is due to Corporation Tax (+37.4%), but Income Tax (-1.4%) and VAT (-0.7%) are showing a big improvement on their abject performances earlier in the year.

Lets face it. Income tax is really the big indicator. It is still falling, and with an estimated further 70, 000 to lost their jobs next year, will continue to, as will all of the expenditure related taxes. Our €6 billion cuts will probably produce a net saving of about €4 billion, while pushing unemployment past the half million mark. Predictions are meaningless, people working or not is the only true indicator of the state of an economy