I decided not provide any analysis of the figures below. These figures speak for themselves. To explain their purpose: I have computed the expected burden on current and future taxpayers from the total ex-banks debt carried by Ireland Inc as:
All figures input into calculations were taken from CSO and Central Bank of Ireland databases. All core assumptions are outlined in the second table.

Finally, note - the total figures of debt per taxpayer are for Household Debts and Government (including Nama & ECB/EU/IMF loans) debt. Do not, please, confuse them with the official Government debt alone.

So here are two tables. Interpret them as you wish: 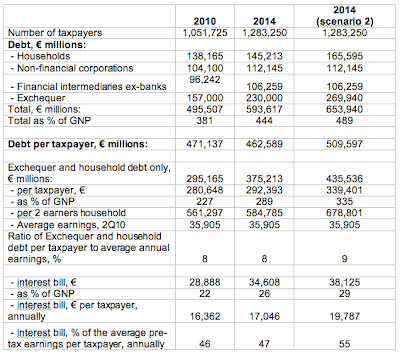 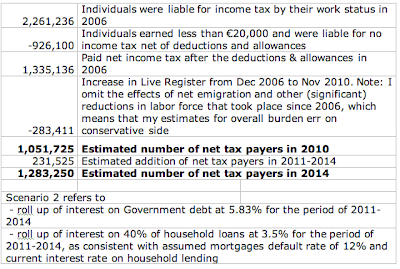 PS: some people accused me of double-counting:

Posted by TrueEconomics at 7:25 PM

Of course, my error - correcting now...
Thanks for flagging it.

Wonderful work, Constantin. Your separation of household/personal debt with corporate debt and govt debt is very useful. It's not only big fiscal irresponsibility. It's also big personal irresponsibility, why the debts just rose that high.

I used the table here in my recent blog article, http://funwithgovernment.blogspot.com/2010/12/fiscal-irresponsibility-1-ireland-part.html

A foreign financial firm's borrowings from its parent is not the liability of the Irish population yet it is included here I presume within the 'Financial Intermediaries ex-banks'?

Jonathan, please read the post carefully - I do not include Fin intermediaries ex-banks into my calculations of debt per taxpayer. These only include Household Debt and Exchequer Debt. It is even specifically referenced as such in the table and outside the table.
Best, C.

Con, thanks very much for answering my Q the other day by this post - having read it, I now nearly regret asking!!! The scale of the crisis is encapsulated in your numbers, should be given to mainstream media who haven't had the wherewithal or imagination to break it down to the individual. J

This assumes an increasing working age (i.e., taxpaying) population in 2014 from today's levels......

Emigration, baby......good luck keeping the debt per taxpayer that low!!

Dear Lord, wish you hadn't posted this!
But I know you had to!
Estimated time of Default?

There's a populist view that all of the problem is attributable to the busted banks and burning the foreign bond holders would have solved all of the problem. However it seems to me that the overall debt is so large that, so far, the amount attributable to bank bailouts is only a relatively small part of the debt problem. To help me understand it better, I'd be interested in seeing how much of the Exchequer debt has arisen from budget deficits to cover normal Govt expenditure and how much has arisen from the bank bailouts.

If you have the time in future, I'd also be interested in seeing an analysis of how much of a stake do foreign bond holders have in the problem banks and whether the amount might be sufficient to cover bank losses in some form of restructuring. I've seen it mentioned that senior bond holders only hold a total of about 20bn or so, in which case that amount would not contribute very much to a restructuring strategy.

There is so much debit in Eire that Emigration will be the only solution left to the young . In the past this was not so much an issue as there plenty of children around so there were enough left behind to keep the economy going.
Unfortunetly in this day and age I doubt this will be the case .
The best will leave bacause they can ...............
The rest wont cause they cannot.
Before the famine the population was over 9 million for the Whole island Now the republic has recovered to nearly 5 million I read once .
Anyone like to guess what it will be in 30 years time ? 40 years time ?

OMG!
The only solutions are to default on almost the entire debt and to inflate, which given the banks we have will be impossible within the EZ and EU. Thus we are destined to leave and to devalue, inflating away what debt remains.

We will not be alone. The downside is that much of the investments made by pension funds will be badly damaged because they too are inflated by the debt. As it disappears, so too will the value of the investments.

The only choice is one of timing. We kick the can as long as we can or else we follow Iceland. Those who get into power will then be in a position to arrange investments in the new economy.