With a slight delay, here is a deeper look into Ireland's trade performance through October.

First - exports and imports in levels: 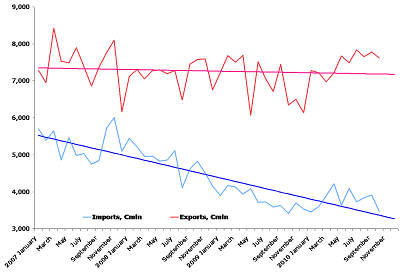 Notice first that Imports are following steeply down-trending line, while Exports are trending flat and even slightly down over 2007-to-date period. Encouragingly, since May 2010, Exports are managing to stay well above their longer term trend line.

Summarized in the tables below, monthly and annual figures show clearly that significant gains in the trade balance are driven primarily by the continued declines in imports. 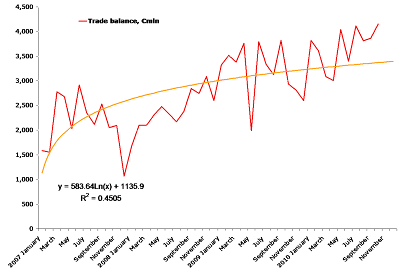 At the same time, strong performance in Trade Balance is coming against the tide of adverse changes in the terms of trade: September marked the 4th consecutive month of deteriorating terms of trade, with a fall of 0.7% on August. Overall, since May 2010 terms of trade
have fallen by a cumulative 5.11% through September 2010. We can now expect this process to continue through October-November and cumulative May-October loss in terms of trade to rise to 5.9-6%. 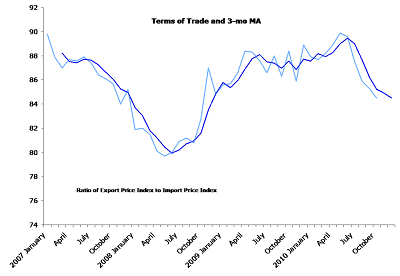 It is worth taking a closer look at the relationships between trade balance components and terms of trade over the 2007-2010 period. 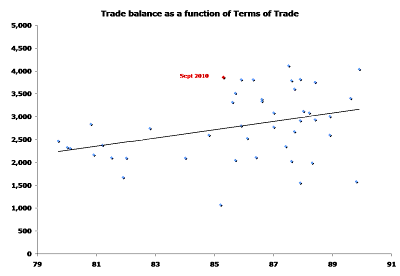 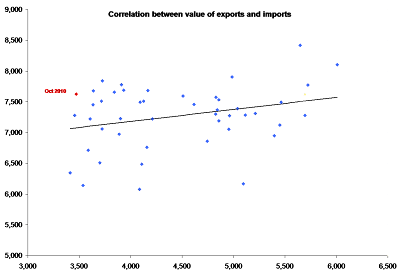 Looking at the annual data: 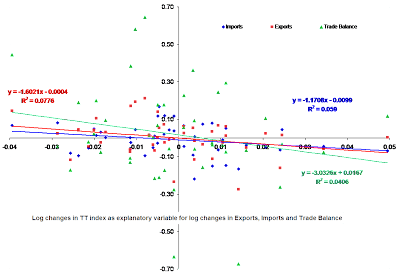 All of this data clearly suggests accelerated process of transfer pricing by profit-generative MNCs during the 2010 period. In fact, looking at log-relationships, growth in the trade balance is currently being explained by faster shrinking imports than the changes in exports. Coupled with deteriorating terms of trade, we have strong suggestion that our trade performance is being sustained primarily by the MNCs driving through strong expansion of profit-booking transfer pricing. 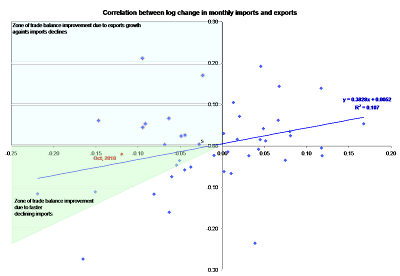 Of course, one should remember that whether due to transfer pricing or organic exports growth or - as indeed is the case, both - the improving Trade Balance is about the only positive news we can count on in 2010.

Posted by TrueEconomics at 4:01 AM

Constantin,
Where do I get quick and easy rankibg of Ireland's trade partners, country by country, country values? CSO etc either too broad (not country by country, just wide regions or too detailed (by sector. Not clear where sources are since I came home from U|K, my research usually in other areas. Thanks, Derek
(Derek Lynch.