Live Register data was out today, throwing some positive news into the generally adverse newsflow. The headline figure is that November LR has declined 4,200 in seasonally adjusted terms month on month. 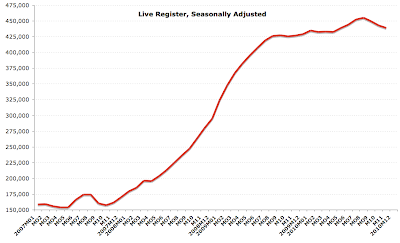 This follows declines of 5,400 in September and 6,200 in October. In 11 months through November we are still clocking and increase of 9,900. Expressed in weekly terms, chart below illustrates the dynamics. 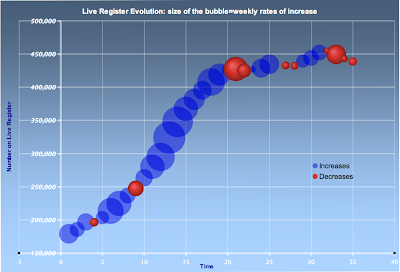 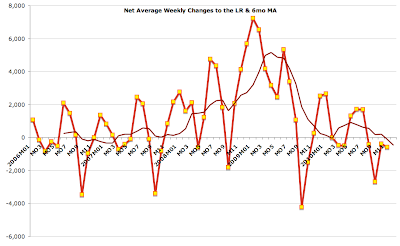 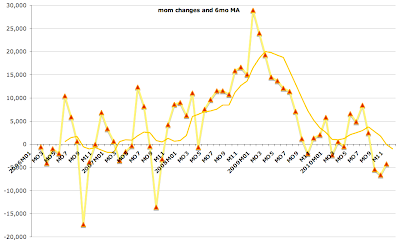 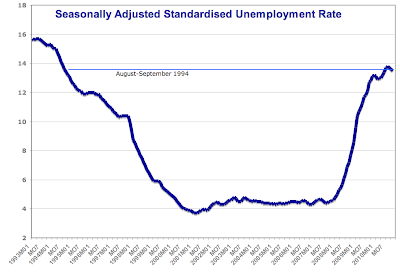 Unemployment, as estimated by the LR, now stands at 13.5%, having slipped from the high of 13.8% back in August. It is impossible to tell, based on LR, whether the moderation is driven by contracting labour force (with LR dropouts) or emigration (ditto) or outflow of LR recipients to education, or all three. However, some reduction in new jobs destruction can be expected over a period of time of 3-5 months, given the level of jobs destruction prior to mid 2010. Whether this is sustainable trend or a 'dead cat bounce' effect is a matter of time.

One possible glimpse at what is going on relates to the males LR numbers, which has fallen by a larger proportion than female in November. Males unemployment was much faster to rise and started to do so earlier in the cycle, which means that males are now more likely to come off LR and also to emigrate. However, the emigration story might be overplayed here. There was a monthly decrease of 4,698 (-1.3%) in Irish nationals on LR and an increase of 147 (+0.2%) in non-Irish nationals. So, with non-nationals more likely to emigrate (return migration or movement to another third country for employment), these numbers suggest that emigration is most likely not a significant contributor to the LR changes.

On the other hand, based on occupational groups, the encouraging signs are clearly evident:
In contrast,
So overall, the numbers would be cautiously optimistic, at least as far as potentially signaling a bottoming out of the jobs destruction cycle.

One point of pressure that remains is the duration of unemployment:
Likewise of concern is the quality of employment (although, of course, having at least a part-time job is much better than none at all):

Posted by TrueEconomics at 9:25 PM

I think it's the rigid labor laws in Europe, the over-protection of workers, that discourages additional hiring. Why hire someone if current workers can do the job and it's very expensive to hire one and politically sensitive to fire him/her someday?

@Nonoy Oplas
In the private sector i dont think it is such a problem in Ireland.. the problem is with the public sector... despite being an unsustainable burden, the government is not shedding the jobs like they should be doing, and cutting the over-inflated salaries oh and the gold plated pensions... for some here, it is still the life of O'Reilly!