The following post is attempting to put some numbers behind a highly uncertain, opaque and completely under-reported side of the Irish banks operations - the side relating to securitisations and derivatives exposures. My numbers below are pure estimates and their objective is to at least start raising the questions as to the depth of our (taxpayers) exposure to this murky world of banks' securitised assets.

Before we begin, I must also relay my thanks to Brian Lucey and 3 anonymous experts for providing advice and comments on the earlier draft and to LorcanRK who was involved in trying to scope the problem earlier.


Years ago, before our sick puppies (banks) became sick, in the golden days when the Anglopup, AIBickey, permo, INBiSquit, EBSsie and BofIpooch were still wagging their happy tails around the streets of Dublin, securitisation was all the rage.

The basic idea behind this transaction runs innocuously enough as follows: a bank holds a bunch of loans, say mortgages. These yield an annual revenue stream, but hold up capital, restricting new lending. To help unlock this capital, a bank can package these loans together and sell them to an SPV which will issue a paper security against these loans that entitles the owner to a share of the total package of loans as they yield returns over time. An SPV, of course, doesn’t manage the mortgages but leaves them in the custody of the bank which acts as a manager/custodian, responsible for collecting the moneys due and paying out to the SPV.

Now, for a bit relevant to us: an agreement between the SPV and the custodian has two key covenants:
The first point means that should an SPV ask an Irish bank for its loans (due to a breach in its covenants), the banks must deliver these loans.

The second point means that if the covenants are breached, by, say for the sake of argument, Irish banks rating sinking to junk, the banks can be found in a breach of covenants and face:
Every securitized contract runs alongside it a derivative security designed to protect against the risk exposures relating to the loans.

Now, let’s go back to the history. Earlier this year, I wrote about our ‘national derivatives accounts’:
The above is very close to the gross notional exposure amounts of €640 billion (for two banks ex-Anglo) reported in 2008 by the employee of the Financial Regulator - Grellan O'Kelly (here).

So now, suppose that the notional value reflects symmetric hedges, and even there, let's assume that directionality is such that benign risk is weighted by twice the weight assigned to maximum loss-linked risk, so that the underlying value of these derivatives is around 1/3rd of the €742.3 billion of notional value, or €245 billion.

Here is the beefy problem. Since these derivatives are written against real loans contracts, what happens if the covenants of the SPVs behind them are breached?

Let’s talk some hypotheticals (since we have no actual clarity on these):
Things are starting to smell rotten… But do not be afraid, those in charge who still have some brains left spotted the dodgy stuff. To our chagrin, however, the smart ones are in Frankfurt, not in Dublin. Back in August 2008, the ECB has pulled the plug on taking Irish banks-securitised loans as collateral. Miraculously, in the end of 2008, CBofI lent Anglo €10.5bn against some mysterious collateral that, several of my sources argued, was previously rejected by the ECB.

Why would the ECB decline to take securitised packages as collateral, while taking the loans? Surely this signals something is amiss with the vehicle of securitisation as carried out by the Irish banks?

Two things can be dodgy with the securitized packages in general:
I am not going to speculate what it is – time will tell. Instead, let’s run through some scenarios on potential losses due to the above positions. 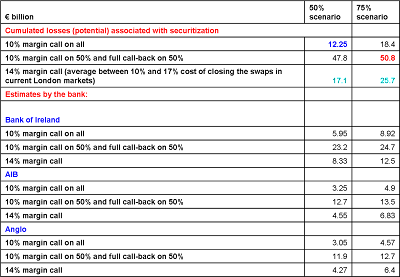 So the downside from the derivatives exposure and securitization can range between €12.25bn and €50.8bn.

Let’s take a look at the underlying assumptions. Running through the ‘What if covenants are breached?’ scenarios, one has to remember that many of the securitized loans borrowed against are related to more stable, longer-term mortgages. Since default rates across mortgages are lower it is highly unlikely that SPVs wouldn’t want to claim them out of the hands of the insolvent banks. This means that the 10% margin call on all loans scenario is highly unlikely to materialize. More likely – either the margin calls will be larger, or full call backs will be triggered. Which suggests that the range above more realistically should be expected around €17.15bn and €25.7bn.

Also, recall that Irish banks weren’t really at the races in speculating on financial instruments, preferring instead to speculate on property. This means that my assumption of 50% unidirectional net derivatives relating to property securitization is pretty conservative.

And remember that none of this has been factored by either the IMF or anyone else into the expected losses across the Irish banks. It hasn’t been incorporated into my earlier estimates of
The total expected loss across the entire banking sector, net of recoveries might be as high as €93-98 billion. Or it might go as high as €107bn. And at this point, folks, even an old hawk like myself starts to feel scared.


Note: these are potential estimates. Given that we have been given no clarity as to the depth of securitisations, or the derivative instruments underlying it, nor do we have any idea as to what the banks have been doing with custodial-managed loans that relate to securitised products, one can only guesstimate - or speculate - as to the true extent of losses. I tried my best to be very, very conservative in the above, with my upper limit of factored estimate of €25.7bn in losses being below the average of the most benign scenario (€12.25bn) and the worst case scenario (€50.8bn). I was also very conservative in my assumptions. Note also that in the end, €17-25bn range of losses used in final estimate of the total cost of banks bailouts corresponds to just 2.29-3.37% of the notional value of all derivatives held in 2009 by the three banks.


Update: things are hardly trivial when it comes to potential securitisation-linked derivatives exposure. Back in 2007, the IMF has warned Irish regulators that:

“BoI has transferred the bulk of its domestic residential mortgage assets to a designated mortgage credit institution, which has a banking license to issue mortgage covered securities.—these are used both for hedging interest risk and for generating additional funding. Almost 60 percent of these securities were held by other Euro Area members, while 25 percent was held in USD by other countries. (IMF WP/07/44: External Linkages and Contagion Risk in Irish Banks, by Elena Duggar and Srobona Mitra - here)

Did IMF say 'the bulk'? So as of 2006-2007, the bulk of mortgages were out to securitisation in a 'conservatively' run BofI?

Posted by TrueEconomics at 12:01 PM

You are looking at the wrong data (notional value of derivatives) instead of the fair values of these derivatives. Looking at the BoI report (page 198), the bulk of derivatives is in interest rates swaps with fair values on the assets side of €3,344 mln and €3,702 mln on the liability side vs notional of €265,731 mln. The risk is that if counterparties to BoI fail, then the fair value (assets side) may not materialize , same for the liability side, if BoI fails somebody will lose up to €3,702 mln, in practice this is much lower because of netting.

JCK, I am using derivatives to estimate the securitisation-linked liability, so this is not a direct loss on derivatives, but a loss on securitised products some of which might have been pawned to ECB/CBofI.

So translating this into English . There could be another big finantial hole out there that the Govt does not know about yet, or admit to knowing?
Another example of incompetance or talling lies . Dont know which is worse frankly.

surely this is not a true "loss", but simply a margin call on a position, ie you pay the margin and your liability is reduced by a similar amount? As such, it is a liquidity risk as opposed to a loss risk? I think this is also the reason why the govt has decided to guarantee any derivative contracts covered by a CSA, as otherwise the counterparty banks would look to close out the negative value derivaitves, but other banks would not close out the positive value ones. As such, without the guarantee, there would be a massive liquidity run.

Also, you say "Every securitized contract runs alongside it a derivative security designed to protect against the risk exposures relating to the loans". Aren't the vast majority of securitisations floating rate and not requiring a hedge?