This is an unedited version of my article in Business & Finance magazine for February, 2010.

Over the last few weeks, a host of data releases – both Irish and international – have provided an insight into our economy’s performance over 2009 relative to our major competitors. The news, while predominantly adverse, still show an occasional proverbial silver lining.

Let us start on a positive note first. Per US Federal Reserve data, the current crisis has been yielding improvements in our productivity over 2009. Table 1 highlights this development. 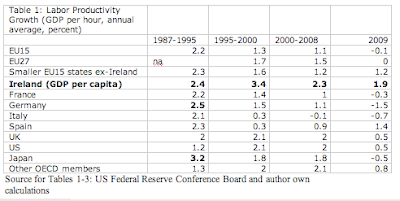 Spurred on by the cuts in private sectors employment and nominal wages, Irish productivity has posted a 1.9% increase in 2009, just as the rest of the developed world experienced either deteriorating or much lower labour productivity growth. Of course, in part, our labour productivity performance was driven by a precipitous collapse in hours worked. It was also helped by the growing GDP/GNP gap. This makes our productivity expansion over 2009 somewhat superficial and attributable to the tear away performance of a handful of MNCs, especially those in pharma and medical devices sectors, where exports rose 20% on 2008 figures.

This means that although unemployment rose dramatically, cuts in hours and numbers worked were probably too shallow relative to cuts in output value. There is still some remaining surplus capacity clogging up domestic sectors – a problem that can only be corrected either via a significant increase in domestic demand or via a new wave of layoffs. Lacking the former, the latter is now appearing to be the case, with several larger employers announcing new rounds of redundancies in mid January.

Returning back to aforementioned data, it is interesting to consider just how large was the transfer pricing effect from our MNCs to our labour productivity growth. As no detailed data on such operations is available for Ireland, we have to look elsewhere for evidence as to what has been going on over the course of 2009.

One study from Germany – published last month by the CESIfo institute – shows that across 27 European countries, on average, multinational firms operating in lower tax regimes have managed to incur labour costs that are some 56% lower than those incurred by their domestic counterparts. These significant tax savings were, of course, taken not in the form of lower wages paid to the employees, but in higher profit margins booked through lower tax countries. And this was the average for 27 countries, of which Ireland sports one of the lowest corporate tax rates.

Incidentally, transfer pricing also explains the surprising data on FDI inflows revealed in mid-January by the UNCTAD. According to UNCTAD, 2009 was a bumper crop year for inward FDI into Ireland, with gross inflow of USD14 billion – a reversal of fortunes on USD20 billion gross outflow in 2008. These figures prompted a slew of rosy reports in the media. Of course, our gross FDI inflows also reflect the extent of transfer pricing being carried out through Ireland.

In 2009, Ireland-based MNCs booked record profits through their local operations in order to reduce their tax exposure back in the home countries. The proof of this is in robust corporate tax returns booked by the Exchequer. Now, there is a new push for tax arbitrage, and this time around its coming through beefing up the investment side of the balancesheet – higher investment in Irish subsidiaries today mean higher returns on investment booked tomorrow. Not surprisingly, there is no evidence of the USD14 billion new ‘investment’ to be found neither in terms of new employment in the MNCs-supported sectors, nor in much more realistic IDA end-of-year results.


Clearly, shedding personnel with below average performance and reducing hours worked to their more optimal levels (reflective of the long term changes in private and public demand) has improved our competitiveness over the last two years. This, ultimately, leads to better prospects for future growth, and, as Table 2 below shows, is reflected in terms of labour input cuts over 2009. For example, Spain, which enjoyed higher rates of labour utlisation growth in 1995-2008 bubble than Ireland, recorded weaker hours contraction and thus lower productivity expansion during the crisis. 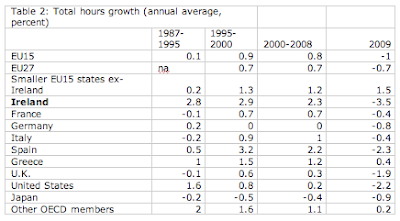 The net result of this is that despite having recorded the most dramatic of all EU15 states’ contraction in output, Ireland has emerged from 2009 with unchanged average per capita income position when compared against the US, as table 3 below shows. 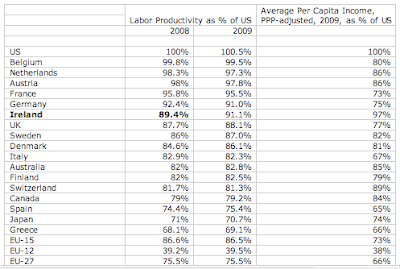 Overall, these figures show that during 2009, private sector in Ireland has led the painful, but necessary process of productivity improvements that ultimately can provide a sound basis for restoring our economy to a new growth path. This is the good news.

The bad news is that despite having suffered unprecedented, compared to our competitors worldwide, cuts in overall employment (in terms of both numbers employed and hours worked), Ireland still remains below its historic trend for labour productivity growth. Barring a remarkable (and at this stage highly unlikely) return of robust domestic consumption growth, this means that 2010 will require further rationalization of employment to inflict deeper cuts into remaining surplus capacity.

The latest newsflow on Bank of Ireland and AIB strongly suggests that the current market valuation of the two banks is out of line with their balance sheet realities. Given current trends, the two banks may require a post-Nama recapitalization to the tune of €9.7-10.5 billion in total under conservative assumptions. Most of this recapitalization will have to take form of equity, as internationally, banking sector is moving toward much higher proportion of equity in overall composition of Tier 1 capital. Given that this amounts to over three-and-a-half times the current market value of the two banks and over 6.5 percent of Irish GNP, a recapitalization at these levels will mean two things for the current shareholders. Firstly, share prices target following the rights issue will be around €0.65-0.75 for AIB and around €0.5-0.6 for BofI – multiples below their current trading ranges. Second, barring a miracle spike in demand for distressed assets by international investors, the new rights will have to be mopped up by the Irish Exchequer. Even assuming extremely generous (to the banks) pricing conditions under the preference shares purchases back in 2008, the new rights issues will imply possible state ownership of up to 80% of AIB and up to 75% of BofI. Current shareholders, thus, are facing a double squeeze on their shares values – one from the volume of new issuance, and another from a massive dilution of their rights (by a factor of 5 times the current warrants held by the State).

Interestingly, my estimate, based on the macroview of the banking system in Ireland as compared against the UK counterparts is basically in line with last month’s research note on the two banks by RBS which put post-rights price target of €0.70 for AIB and €0.52 for BofI, with the prospect of up to 75% state ownership of the banks.

Another interesting aspect of the RBS note is that it provides an estimate of €20bn of cumulative loan losses for the two banks; “majority of which will be crystalised over the next two years”. These losses are linked by the analysts, in part to the banks participation in NAMA, but also due to expected increases in funding costs and the real risk of political intervention. Of course, this column has warned about exactly these risks to the Irish banks valuations for over a year now.