Economics 05/01/2010: Exchequer tale of excesses amidst the hardship

New Exchequer figures clearly show that the crisis is not over!

Before the updated charts, from the first reading of the figures, it is patently obvious that
Further per more detailed breakdown, on the current expenditure side, Community, Rural & Gaeltacht (+0.3% relative to target), Finance (+3.3% on target), and Justice (+1.5% on target) were the three non-social welfare or health-related departments that managed to overspend their targets. 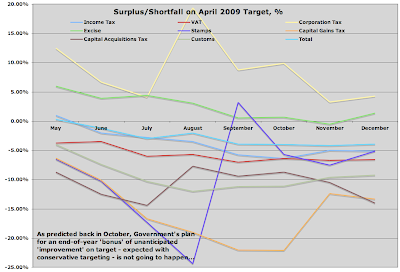 Relative to April 2009 targets, the chart above shows the shortfalls for receipts by main headings. Corporation tax is ahead the forecast - say thank you to MNCs booking more transfer pricing through Ireland this year to reduce their tax liabilities - but this position is still below 5% at the year end.

CGT is shorting the target again after improvement in November. Capital acquisition tax is down for the second month running. Customs show very shallow upturn - most likely due to motor imports flowing to restock for New Year and some replenishment of supplies on alcohol, tobacco and food for Christmas season end.

Year-on-year changes: corpo tax has fallen precipitously and is staying relatively flat now. Total tax is barely up relative to 2008 dynamics, but still below 2008 levels by double digit percentage - it was down 20.8% in November and now improved to down to 19% in December - in yoy terms - the second worst performance in the H2 2009 (it was down massive 21% in May). 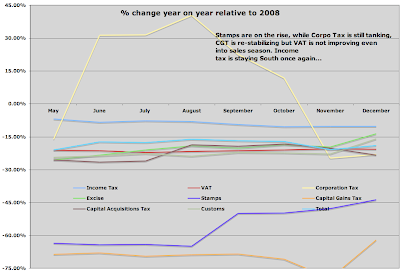 In addition to the above trends, VAT down 20.60% yoy in December - an improvement on -20.80% performance in November and the sixth consecutive month of improvements , Income tax flat relative to November - the latter reflecting the lack of end-of-year bonuses. The former shows extremely weak retail sales dynamic. Stamps & CGT - two investment related taxes are obviously improved. After a 26-30% rallies in S&P, European, UK and Irish stock markets - any wonder?


Next, Exchequer deficit - still wider than annual average, though slightly better than in November. The gap between end-2008 borrowing position and today is €6bn - more Bonds! and Pints! for Q1 2010, then. 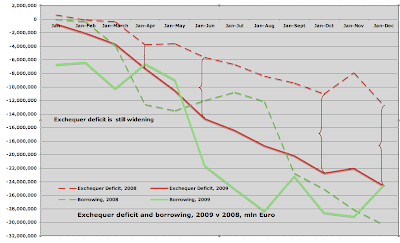 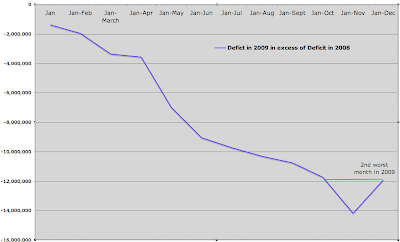 Not a pretty sight - December marks second worst month of 2009 in terms of deficit performance compared to 2008. The big question in this picture is whether this does mark some sort of a return to falling deficits? Well, not really - look at the picture above the last one. There was a seasonal improvement in November - due to the inflow of self-employment receipts for 2008 and estimates for 2009, but it was much weaker in 2009 than in 2008 in part due to the exhaustion of the severance packages, in part due to further jobs destruction for contractors. Apart from this, in October 2009 cumulative deficit was €11.7 billion greater than that registered in October 2008. In December 2009, the same figure was €11.9 billion. I wouldn't call this an improvement or an upturn. 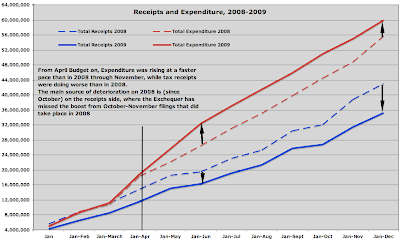 Slight catching up with 2008 in terms of spending in the last month of the year is still not enough to bring spending down to 2008 level. All in (capital and current spending added), the Exchequer burned through an impressive €60 billion in 2009 - up from hardly insignificant €55.7 billion in 2008. But on receipts side, no improvement is visible. Actually matters are getting worse, with total 2009 receipts (capital and current) adding to less than €35.3bn while 2008 receipts came in at €43.1 billion.

Are we supposed to be impressed? Not really - these 'forecasts' were made less than a month ahead of the Christmas break. When one looks back -
Now, I do not have a massive forecasting department staffed with highly paid civil servants and tea/coffee/biscuits deliveries twice daily. I am not even being paid to do any forecasting at all. Per DofF own staffing review, the forecasting powers unleashed by the department on the economy are costing taxpayers a mint.

Their and my error margins for 2009 Deficit estimates are:
But you do not have to be an Einstein to see that things are not improving, folks. The is no pulse and the patient has flat-lined. Full stop. Have April Budget been successful in delivering stabilisation of the budgetary dynamic? Not really. Stabilization would imply that we would trend along with the 2008 dynamics of the deficit starting with May 2009. Chart below shows this not to be the case: 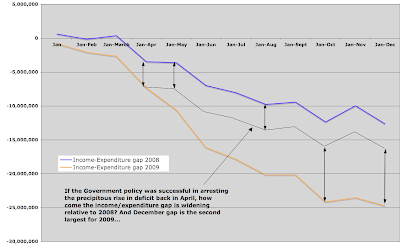 Overall, some observers have argued that there is a substantial improvement on Budget 2010 targets. Well, of course there was. The problem here is that one cannot willingly adopt targets that suit one argument. April 2009 set the benchmarks to deliver and by these benchmarks, 2009 turned out to be worse than projected on revenue side. 3.9% worse or cool €1.357 billion - more than double the net savings announced from public sector pay adjustments in Budget 2010.


PS: Amidst all this talk from banks and brokerage economists about 'improving' Exchequer outlook based on 'too pessimistic DofF projections', my fear is that the Government is being prepped by the DofF (via severe overshooting in the Budget 2010 forecasts) to claw back on some of the cuts planned for 2011. In other words, the DofF might be readying to make a call in the beginning of H2 2010 to cull the cuts if returns shows 'improvements' on its own excessively pessimistic forecast targets. Then again, they might be not pessimistic enough...
Posted by TrueEconomics at 5:15 PM