Based on the latest available data from ECB (through 2008, unfortunately), the following three tables provide relative performance analysis of Irish banking system against its main peers.

In all three sets of comparisons I have: 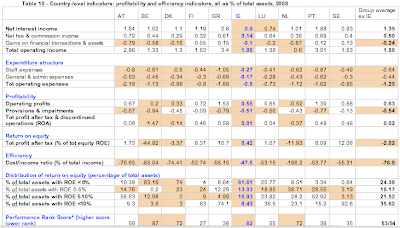 The first table above shows indicators for profitability & efficiency. Here performance rank is computed by assigning the best performing country the score of 1 and the worst performing one the score of 10. There 11 scoring categories in line with the main parameters.

Irish banking system overall comes out as the fourth worst performing in the sample of countries, with significant gap to the group average in terms of sources of income (less stable in the case of Ireland) and total income as a share of assets. Note a very poor performance in net interest income and net fees / commissions - both of these indicators of income will have to be increased in the near future, leading to higher interest charges and fees for retail and corporate clients.

On expenditure side, Irish banks performed above the average, clearly showing that even in the end of 2008 there was virtually no room for improving the margins through further spending cuts. (One caveat - the expenditure side is measured relative to the assets base, so further writedowns on assets in 2009 would have pushed the expenditure performance metric deeper into negative territory). Apart from some layoffs and wages cuts, the sector in Ireland has no choice but to go after income side of the profit margin equation in order to rebuild margins.

On profitability side, provisions & impairments figure is below the average reflecting a clear lack of realism on behalf of the banks. This, in turn, translated into artificially inflated profits, that fell insignificantly short of the group average. However, the relative underperformance of the Irish banking sector was clearly visible in the distribution of returns on equity with most of our banks performing in the lower tier of the group.

The next table shows balancesheets comparatives: 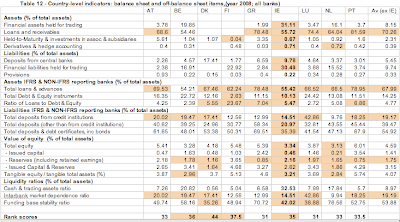 Using the same approach as before, I computed rank scores for the countries (note, I omitted countries with no data observations from the sample). Once again, Irish banks come out as below average performers in the group, ranked fourth from the bottom.

Other interesting features of the data: 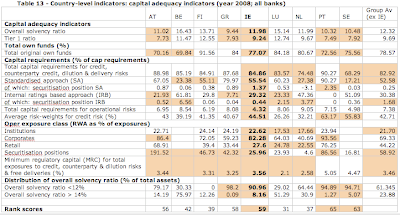 Mid-range solvency ratio and Tier 1 ratio in the environment of artificially depressed / unrealistic writedowns and over-inflated assets base is worrisome as are total own funds. Securitization weighted heavily under standardized approach, but this was not captured under the internal approach. Average risk-weight for credit risk were high and total capital requirements for operational risks were the lowest in the group.

Little insight can be gained from operational exposures, as these are obscured by the non-Irish IFSC operations, but corporate exposure and retail exposures combined to a hefty 105% for risk-weighted assets, compared to 91% for the group average. The last two lines - overall solvency ratios are telling. Group average is 12.36%. For Ireland: 91% of all assets were held by the institutions with less than 12% in terms of solvency ratio.

The main conclusions from the tables are:
Given the lags in the data and in our banks' willingness to face reality of the risks carried on their books, it will probably take well into 2010 (waiting for Nama to become fully operational) for the banks to start in earnest rebuilding their capital and margins positions. Which means that we will not know the true state of our banking sector fundamentals until mid 2011, when the data will be available to cover 2010.

The risk, of course, is that before then, the banks will squeeze all domestic liquidity out of the Irish economy, while the ECB begins to restrict inflow of external liquidity to the system. If that happens, Nama losses and budget deficits will take the second seat to the wave of insolvencies that will hit our country.

Of course, as usual, we have no road map for addressing such risks. Remember - even despite all banking heads insisting publicly that post-Nama there will be no increase in credit flows to SMEs / corporates / households, our Government continues to claim that Nama will be a 'liquidity event' restoring flow of credit to economy.


I will leave you with the following quote:

"Most of this lending is policy-directed with an implicit government guarantee. Despite ...closed factories in *** resulting from the global financial crisis, and hundreds of empty office buildings, retail centres and hotels that are not meeting their debt service payments, banks are still not foreclosing on these properties nor calling the loans due.

The banks prefer to rollover or extend the loans to avoid having to report an increase in non-performing loans. It is not uncommon for *** banks to extend a loan for as much as one year without interest payments if the lender “believes” the ultimate recovery value of the assets will be greater than the outstanding principal and interest. However, it is nearly impossible for a bank to value an empty office building, in a market with a reported vacancy rate nearing 40 per cent ...and declining rents."

The article goes on to argue that for *** this scenario of banks unwilling to recognize losses is risking a derailment of the country progression to the top of the world economic order. The *** is, of course, China. And the article was published here.

But it might have been written about Ireland, where the banks' belief in the ultimate recovery value is nothing more than a punt on selling the distressed rubbish assets to Nama for the price that even at a 30% haircut will reflect an overpayment on their true value of up to 30-40%.

What will Nama do to these assets and how willing it might be to shut down insolvent operations? More willing than the completely reluctant Irish banks? I doubt it.