One of the comments to my earlier post today got me thinking about a simple question: what are the prospects for employment in Ireland for all those PhDs we are preparing to stamp out in the next few years?

In truth, of course, the answer to this question is: I don't know. But some data mining and a quick back of the envelope analysis can shed some light on the issue.

Per CSO's Business Expenditure on Research and Development 2007/2008 document, we have: "...estimates indicate that research and development expenditure should have increased to almost €1.7bn in Ireland in 2008. Enterprises indicated that they expected to spend €905m on labour costs, €510m on other current costs, €205m on instruments and equipment (excluding software) and €65m on land and building costs." This gives us the overall ratio of labour costs to total spending at roughly 55%.

"There were 13,950 persons engaged in research and development activities in Ireland in 2007. In total there were 8,250 researchers of which 1,200 were engaged as PhD qualified researchers, 2,950 technicians and 2,750 support staff."

So average labour cost per one R&D staff member: €64,875 per annum. Labour costs are usually comprised of roughly 60% salary/wage and 40% non-wage costs (taxes, insurance etc). This means average wage per person engaged in R&D activities in Ireland was around €38,900 per annum. Not a hell of a lot, by any measure. Just about 76% of the average earnings in our illustriously educated public sector.

"There were 10,950 Full Time Equivalent (FTE) research staff in Ireland in 2007. Almost 1,050 of these FTEs were PhD qualified researchers while there were more than 6,200 other researcher FTEs." Another useful fact to show the ratios of PhDs to non-PhDs required in the private economy.

"There were more than 1,200 enterprises engaged in research and development activities in Ireland in 2007. More than two thirds of all enterprises spent less than €500,000 on research and development activities, a fifth spent more than €500,000 and less than €2m while 14% spent €2m or more." Figure 1.5 provided specific allocations by enterprise spend which I used in following calculations.

Now,  suppose Irish enterprises double their expenditure on R&D while preserving distribution of relative spending as is. Suppose furthermore, they increase by 20% the proportion of R&D spending that goes to support employment (as opposed to capital). The total demand for PhDs in Ireland will be – wait for it – 2360.

HEA stats show that total enrolment – not the stock of existent PhD graduates – in PhD programmes in Ireland was 5,637. And that is not enough, according to the DofE plans, which require at least a 25% increase on enrolment levels achieved so far to reach the target of doubling the number of PhDs from 2004-2005 levels. Oh, yes, folks: if businesses double their spending and increase their intensity of use of PhDs in doing this research by 20%, the resulting increase in PhD positions over currently occupied will be just 18% of the total pool of enrolled PhD students in the country. 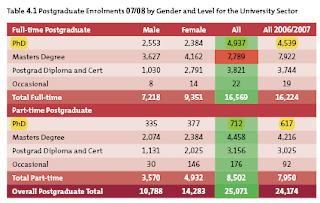 Suppose our State heroically steps in to hire 50% of all freshly minted PhDs. That brings potential PhD-level employment - after the doubling of R&D spending by our enterprises - to, say 40%. Suppose graduation rate from PhD programmes is 60% (it is actually getting higher by the minute as lower quality institutions hoover up state funding for PhDs). This still leaves some 380-400 PhDs floating around looking for jobs.

And this is before we add on those countless Irish PhD students studying in the UK, US, Australia, across the EU. And before we add those PhDs coming into Ireland from Europe. And before we take on roughly 10% annual enrollment growth rate that HEA has been delivering on.

No matter how you skin the numbers, they simply do no add up.
Posted by TrueEconomics at 9:55 PM